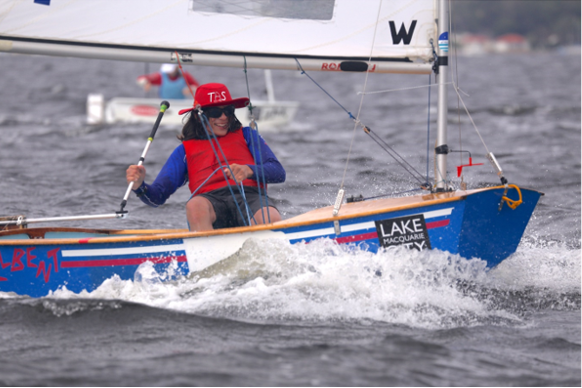 The annual Sabot event caters for all levels of sailing skill, with kids newer to the sport of sailing participating in Sabot Week, while the more experienced sailors compete for the National Championship.

Sixty-five boats registered for the event, with many sailors and their families travelling huge distances to compete.  Kids travelled from as far as Townsville, North Queensland and Port Esperance, in Southern Tasmania, to sail their sabots and have lots of fun.  While sailing in general has experienced cancellation of events over the past two years, the Sabot class has maintained its National Championships throughout, by rescheduling to alternative dates in both 2021 and 2022.

The kids in this training class have continued to have the opportunity to compete, further develop their sailing skills and embed lifelong sailing friendships with competitors across the country.  The Australian National Sabot Council has been dynamic and worked extremely hard to ensure these events continue, which has been important to give the kids and their families something to look forward to and provide a positive environment in what has been a very challenging couple of years.

It was fantastic to see high levels of participation in the Paul Stivano Sabot Week with 19 entry level sailors competing from Queensland, Tasmania and NSW, representing 11 different clubs across Australia. Sabot Week was a series of eight races, which had five different heat winners. There was a huge improvement in the confidence and skills of all sailors across the four days, which supports the importance of Sabot Week, providing a strong platform for developing future sabot sailors.

The Lake Macquarie City Council Sabot National Championship in both the 1-up and 2-up fleets was a very close and hotly contested battle. The 2-Up Sabot National Championship was won by Luke Mercer and Mary Lou Doolan from Lane Cove 12ft Sailing Skiff Club and Drummoyne Sailing Club sailing White Pearl, just two points ahead of siblings Lily and Harry Mercer, in Aerial, representing Lane Cove 12ft Sailing Skiff Club.

The 1-Up Lake Macquarie City Council Sabot National Championship was narrowly won by Lake Macquarie sailor Keisha Day in Holy Guacamole, with Keisha being only the third female sailor in the 58-year class history to win the overall National Sabot title. Competition was consistently close between the siblings again with Keisha prevailing on the last day, three points ahead of her brother Marshall Day, in Speed Demon, both representing Belmont 16’ Skiff Sailing Club.

Charlie Nosworthy in Vitamin C from Port Macquarie Sailing Club cemented third place on the final day with results of 3,3,1,1.  The top three placegetters shared wins throughout the 10 races with impressive speed and boat handing skills.

Competitors and their families enjoyed the huge rigging space, friendly atmosphere and facilities at Teralba Amateur Sailing Club.  While sailing in April runs the risk of lighter winds, the regatta offered a variety of conditions for competitors to test their sailing skills. There was one day which took some time for the breeze to come through, however, there were no complaints from competitors who had lots of fun onshore jumping off a floating foam lily pad.

The next Sabot National Championship will be held at Port Dalrymple Yacht Club in Tasmania, starting 28 December 2022.  There has been a flurry of boat sales following the Teralba Nationals, with keen kids upgrading their boats in readiness for next season, which is always a sign of a successful regatta and a class with a very strong future.  Families are already making preparations for the Tassie Nationals – bring it on – Sabot sailing is serious fun for the whole family.