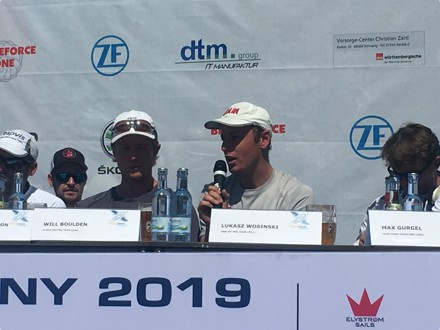 After a full program on day one in the 22nd Match Race Germany, the qualification round continued on Friday with shortened program when new race director, Sabine Brugger and her team from the Yacht Club Langenargen, could only start six of the 33 matches on Day 2 before a persistent summerly lull forced the teams to return to the port.

In addition, there was an extraordinary weather scenario, as defending champion Eric Monnin noted: “An official so called “Fön” (storm) warning parallel to mirror-smooth water is quite unusual, even for Lake Constance.”

For late Friday afternoon, organisers expected a hot storm from the south-east. Accordingly, the boats were secured in the harbor, as were the marquees and the great Erdinger Urweisse Hütt'n in Langenargen’s Gondola Harbour, where thousands of guests were expected to attend the traditional 'Match Race goes Dirndl and Lederhose' party in the evening.

On the sailing side, the first teams qualified for the quarter-finals ahead of the end of Round Robin. Above all, Australia’s Will Boulden and his Alpha Racing team from Fremantle moved into the next round. At their premiere, the crew from Down Under convinced in the preliminary Round by winning six of their seven matches.

All teams with five wins, including defending champion Eric Monnin and his Capvis Swiss Match Race Team, the Hamburg physicist Max Gurgel and his team VmaxYachting, as well as the Austrian skipper Max Trippolt and his Team Segelmanufactur from Bregenz are sure to be in the quarter finals too.

Two-time Match Race Germany winner Eric Monnin said: “Today was a better day for us, but we still have to improve day by day. Our opening defeat against Max Gurgel's team was a good warning signal.”

The 43-year-old Swiss boat designer explained handling of the yachts:” Sensitivity is required in dealing with the big boats, no choking. You just have to keep them running. This also explains why there were no protests today. In light winds, no one wants to come in tight situations which could always stop the boat.”

Most of the other teams with four or fewer points in the intermediate rankings after 13 out of 15 flights have to wait and watch or sail and fight in the remaining matches on Saturday morning. That includes all three Polish teams, skipper Lukasz Wosinski (HRM Racing Team, 4 wins), Szymon Jablkowski (Jablkowski Sailing Team, 1 win) and Patryk Zbroja (KS Dobra Marina Szczecin, 1 win).

“We can probably beat everyone in this regatta,” Lukasz Wosinski said with a wink, “but stupidly, we seem to be doing best in beating ourselves. We lost two races today due to silly mistakes on my side.” The decision whether and which Polish crew will reach the quarter-finals will only be made in the last six preliminary matches on Saturday morning.

On Friday afternoon, 17 year-old helmsman, Emil Kjaer from Copenhagen, has collected 4 points at his Match Race Germany deubit. His Downhill Sailing Team includes match racing ace Joachim Aschenbrenner, who received cheerful applause during the public press conference when he said: “We're getting better every day. I think we can take on all teams here.”

New Zealand’s helmsman Nick Egnot-Johnson (Knots Racing) explains how important the starts are in light winds. The 20 year old is a member of the legendary Royal New Zealand Yacht Squadron, current defenders of the America's Cup together with Emirates Team New Zealand.

Egnot-Johnson said: “The start decides almost everything in the light winds of today, because afterwards there are hardly any passing lanes with these big and heavy boats.”

VmaxYachting helmsman, Max Gurgel, learnt this in the race against the Kiwis, when he had to take his fourth defeat after five wins. He later said: “I made a fatal timing mistake. We just came too late to the start and beat ourselves. Accordingly, we have changed our on-board communication for the coming days, striving for more efficiency.”

Before the quarter-finals, Gurgel relies on a well-known strength of his team:” Under pressure, we often seem to sail our best.”