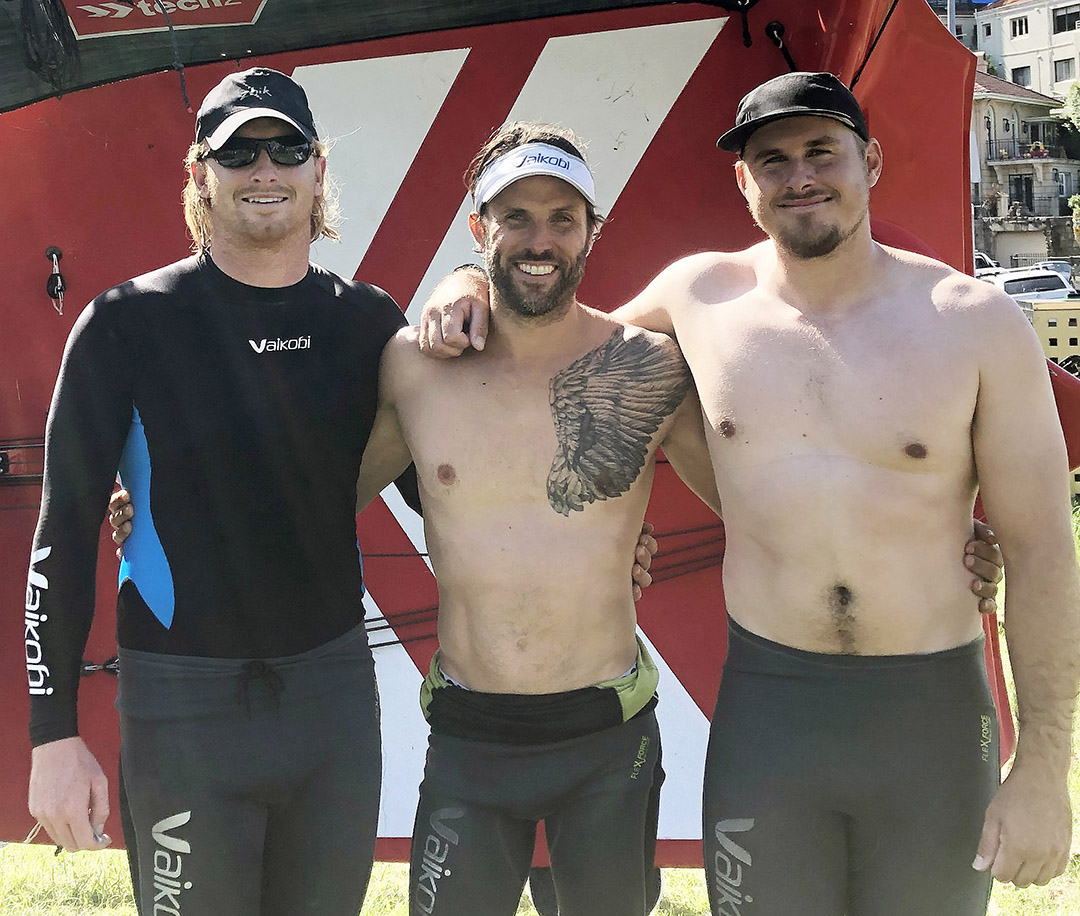 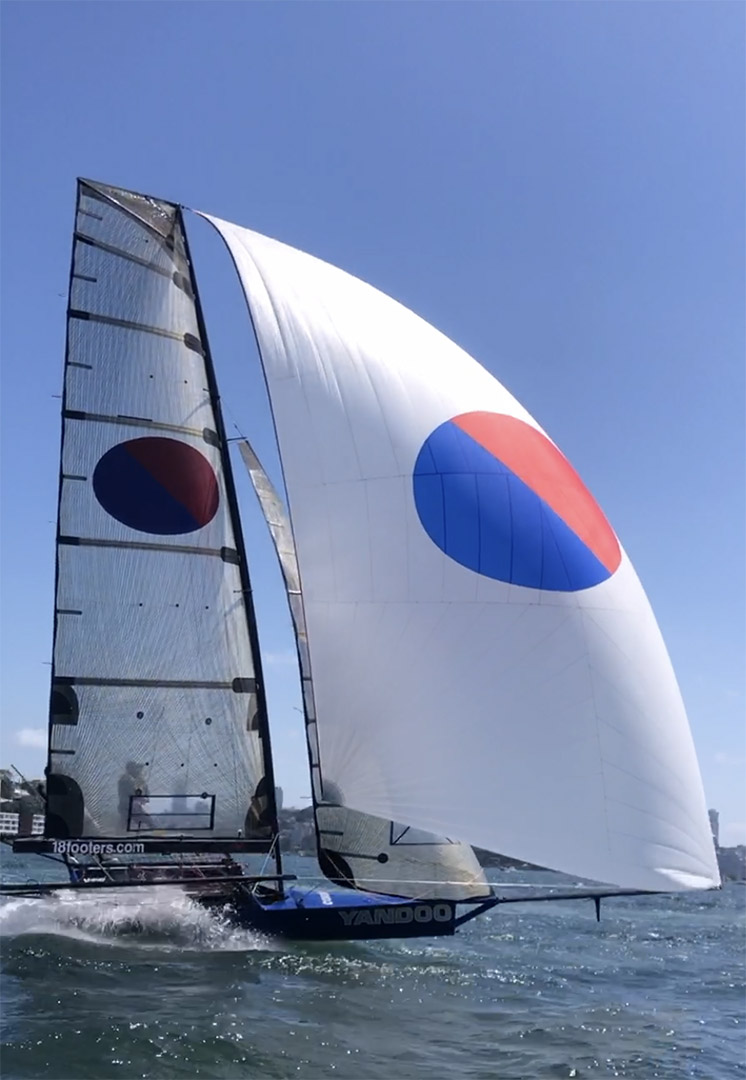 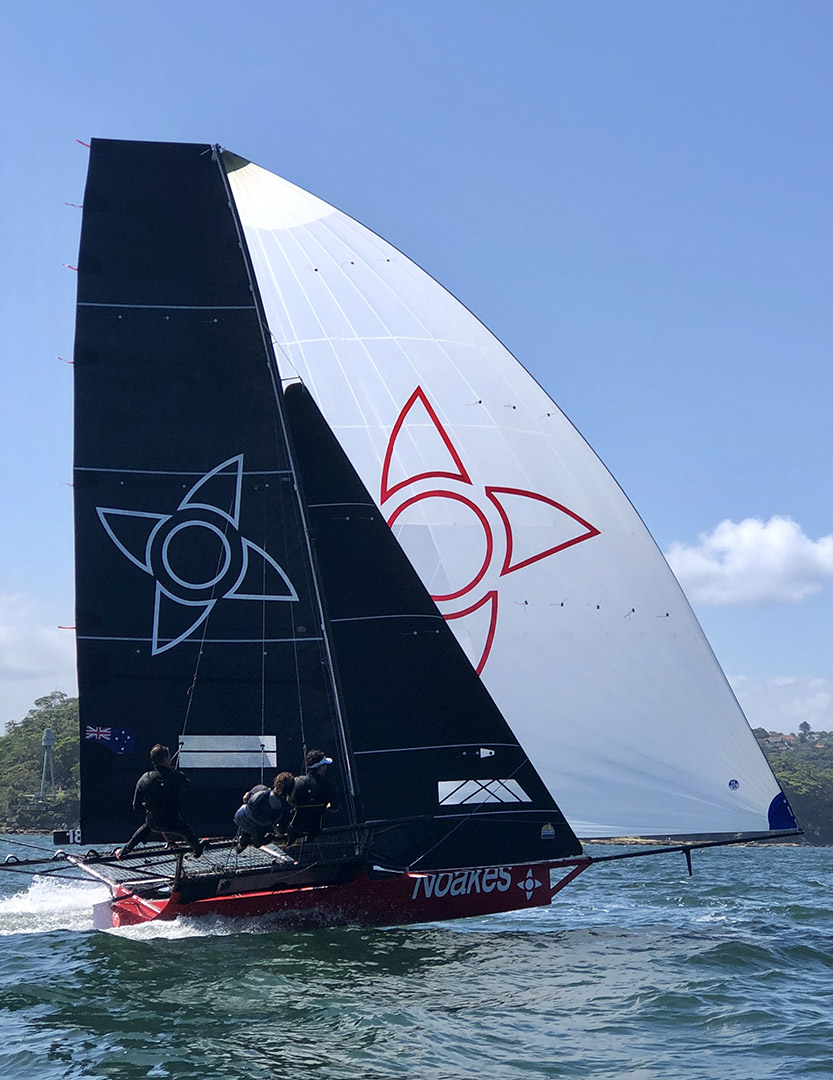 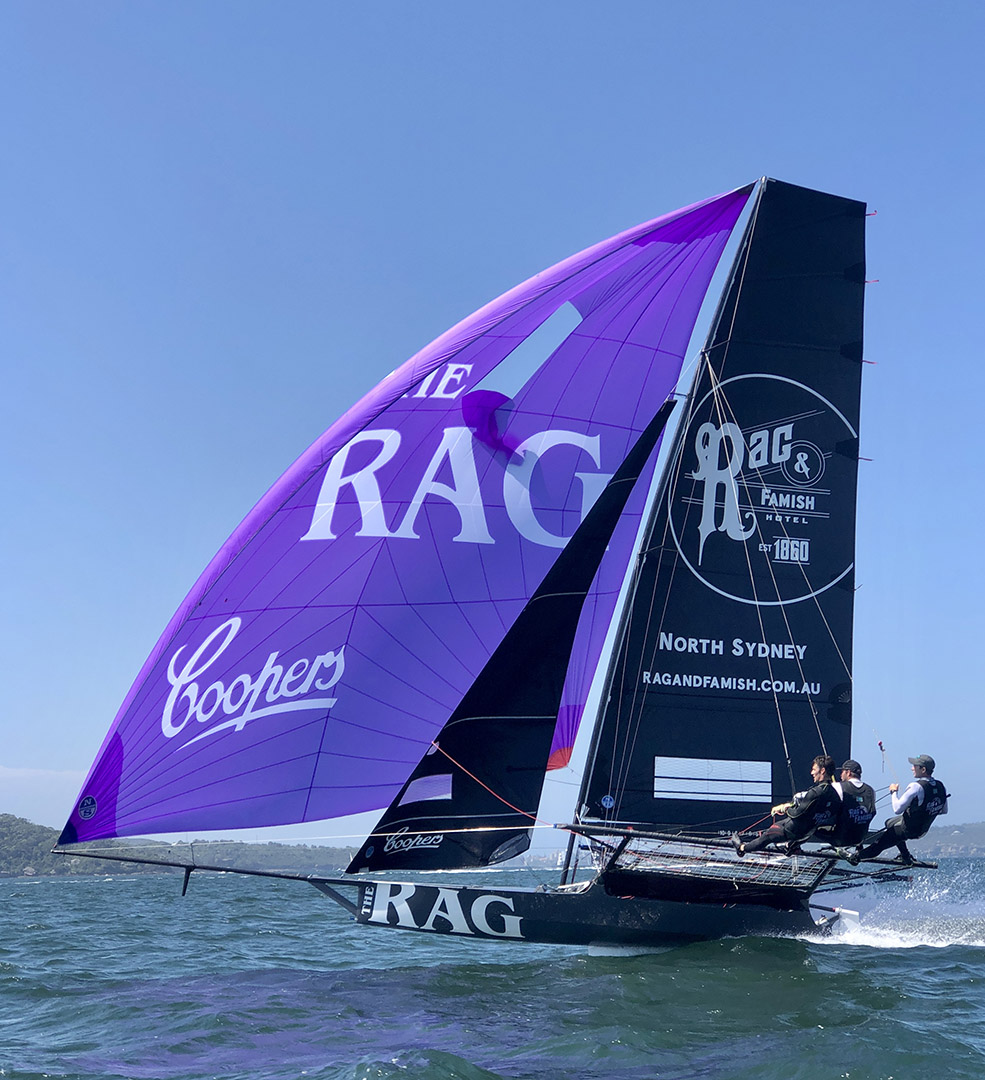 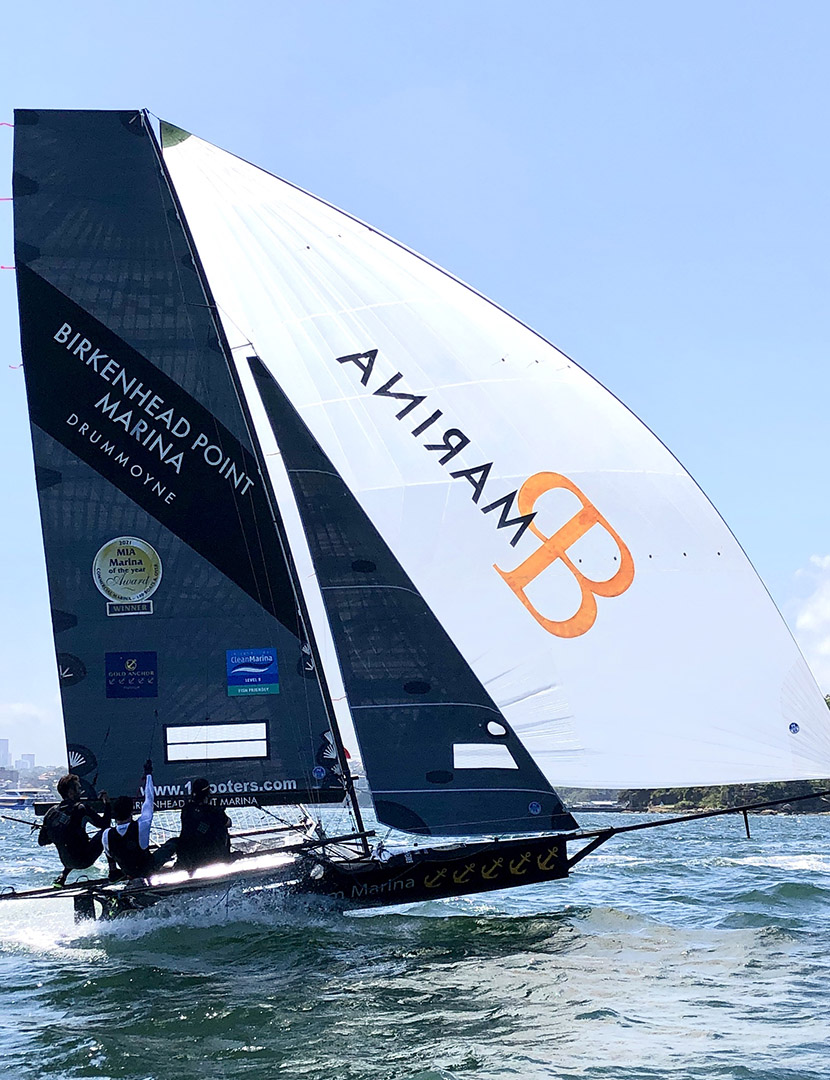 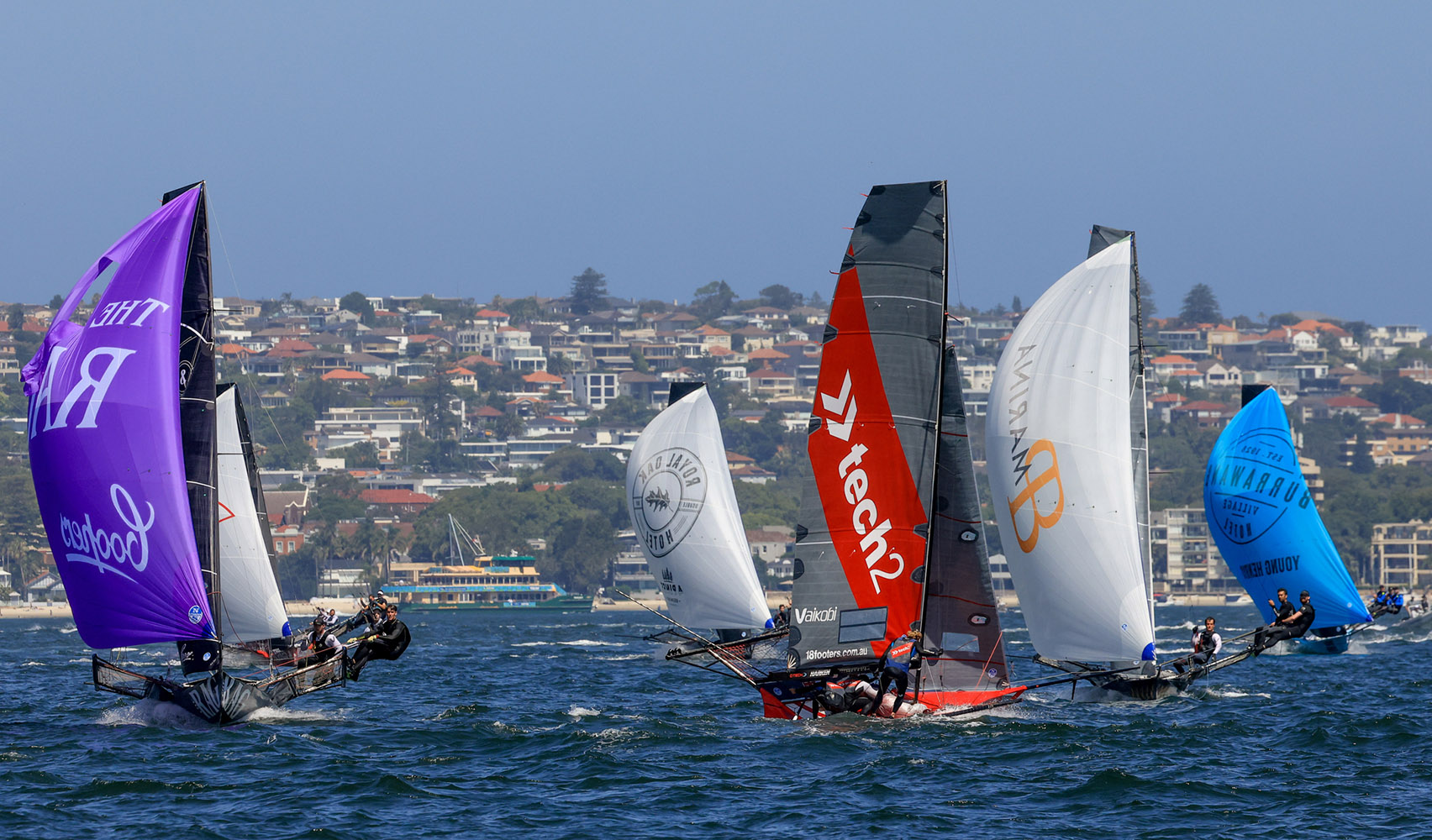 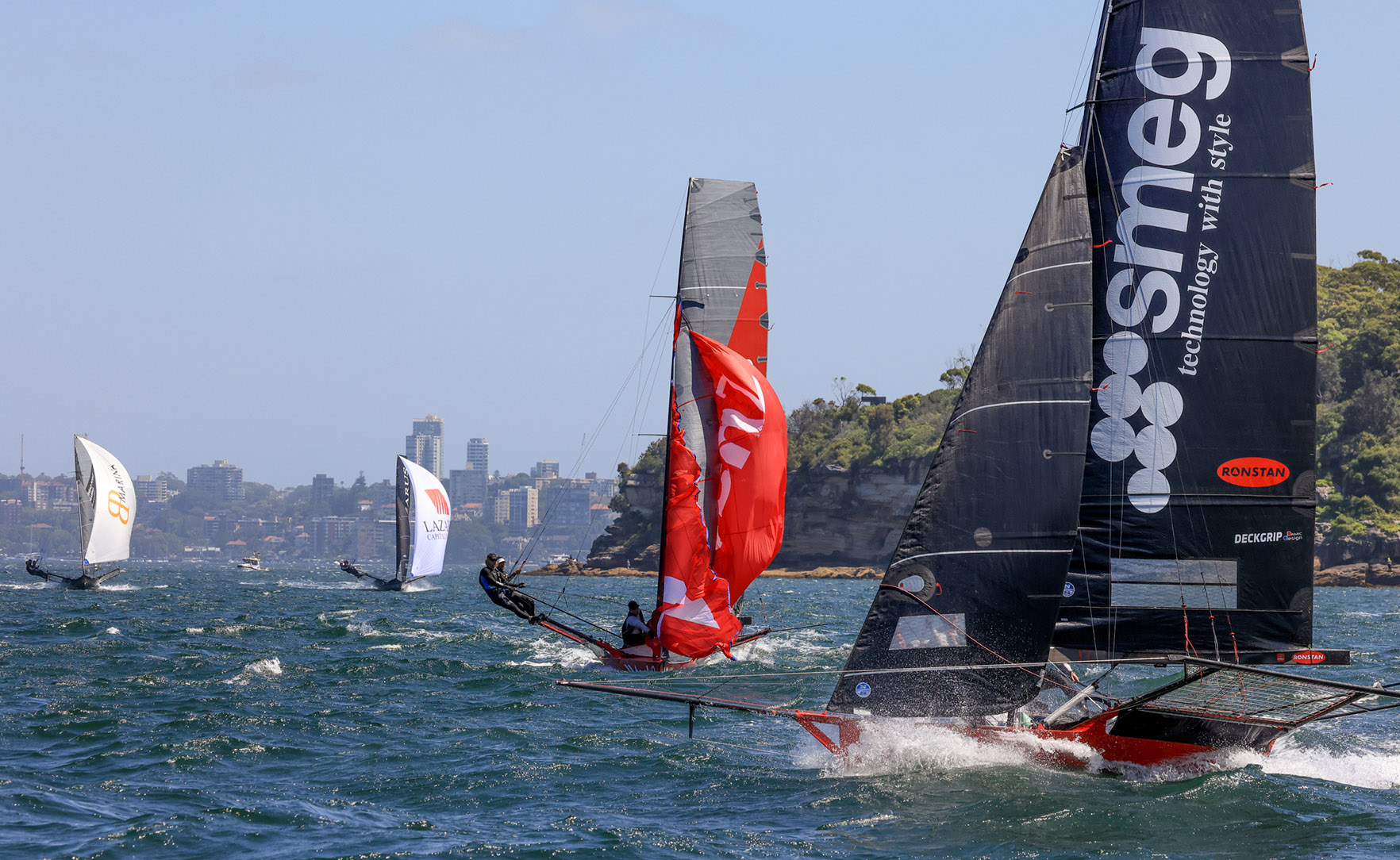 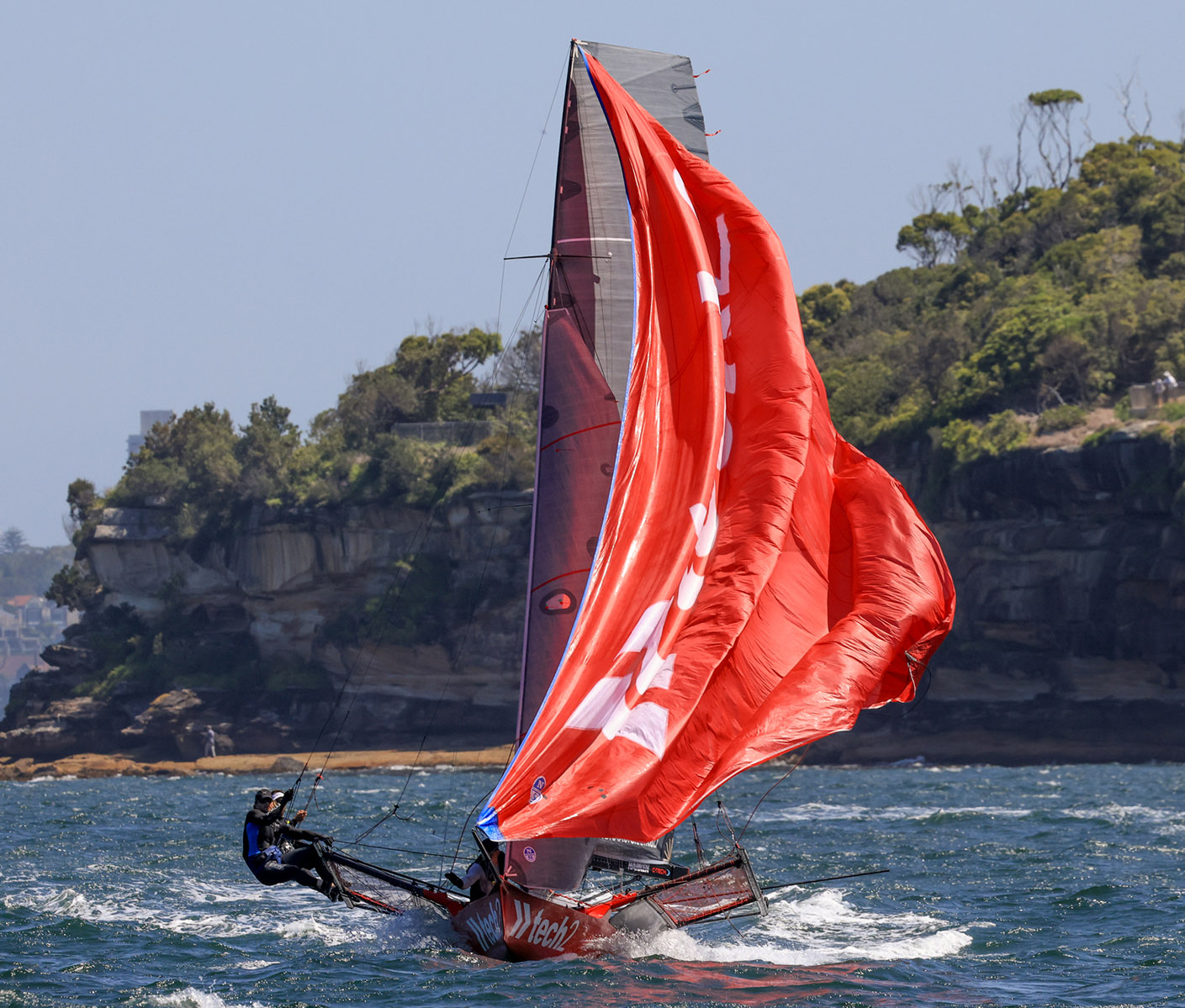 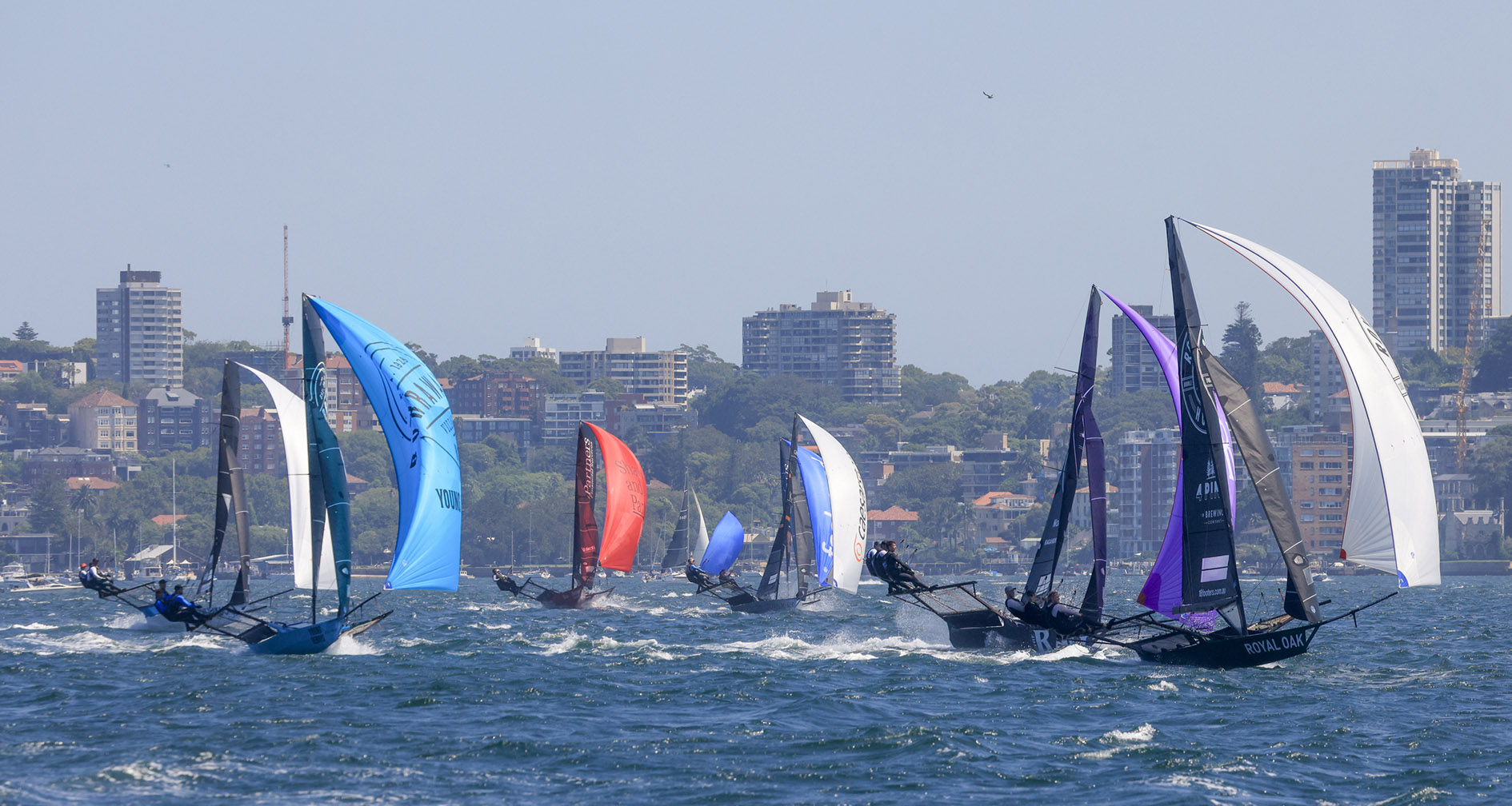 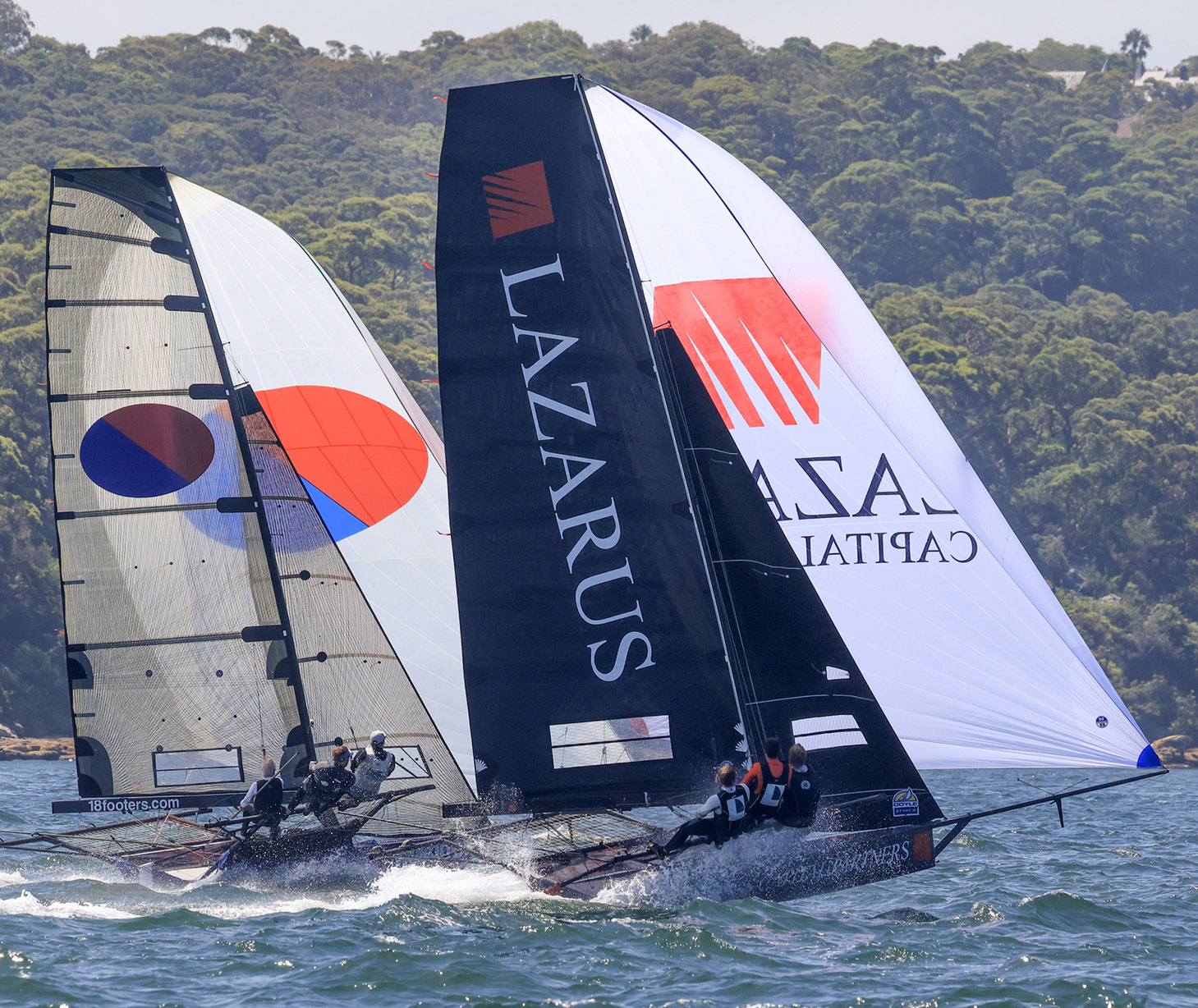 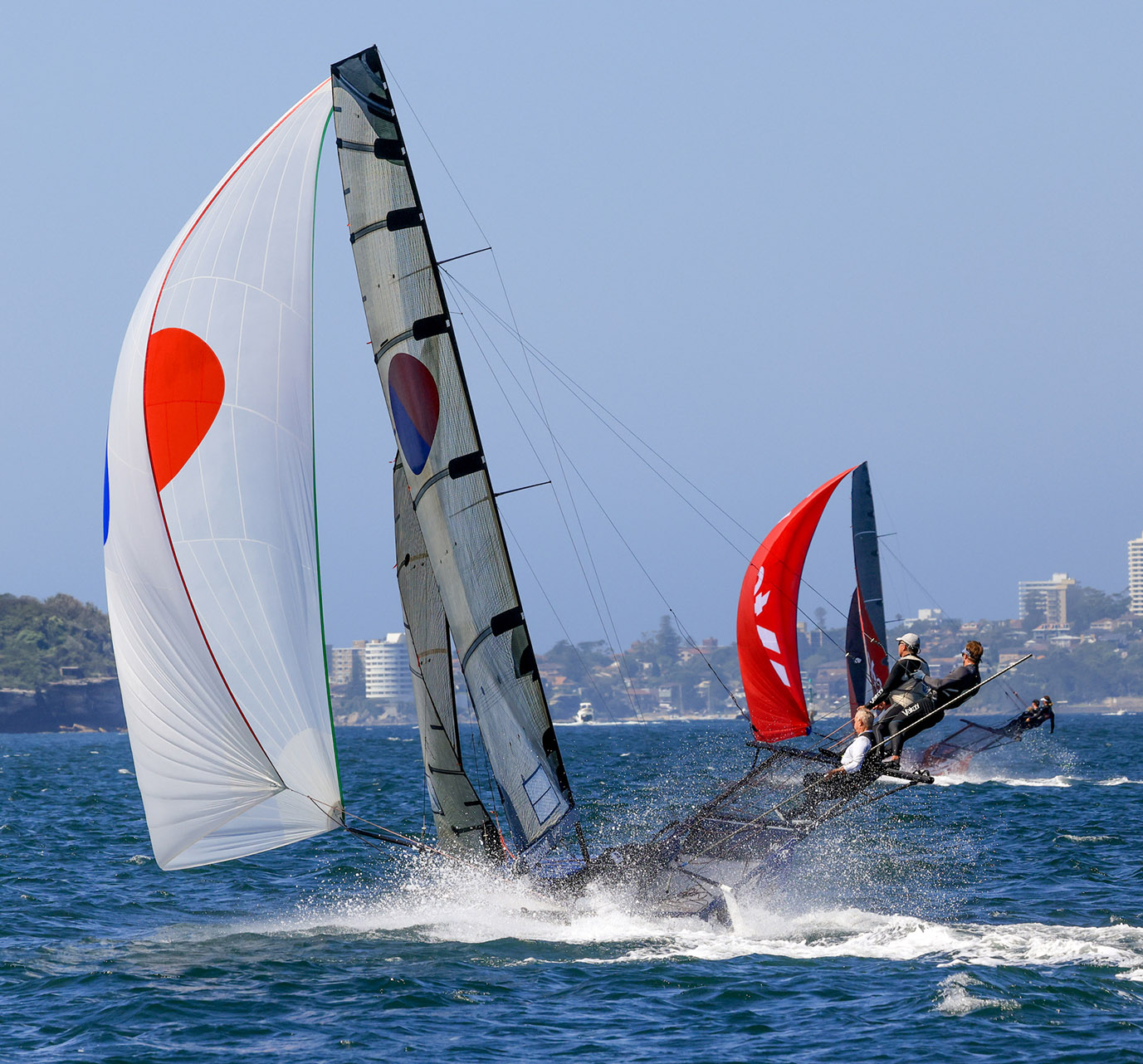 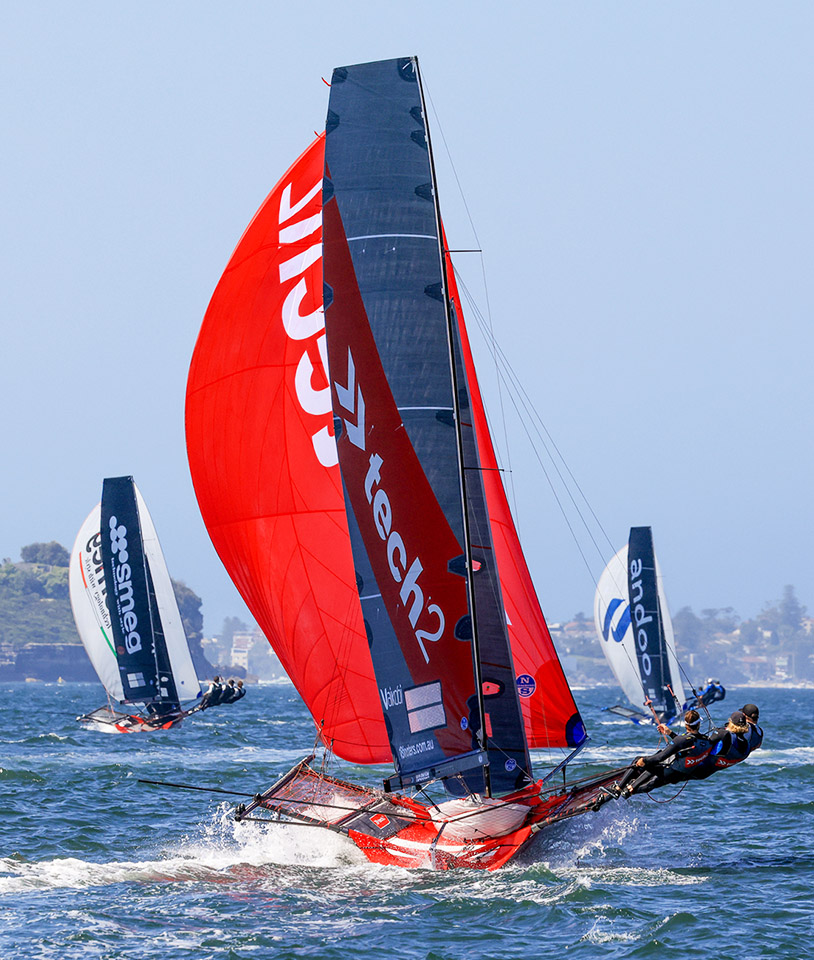 The third race win of the NSW 18ft skiff Championship to the Tech2 team of Jack Macartney, Charlie Wyatt and Lewis Brake, in Race 6 on Sydney Harbour today, puts it into equal lead of the series with just two more races to be sailed.

Yandoo (John Winning, Mike Kennedy and Fang Warren) went into the race with a slender one-point advantage over Tech2 but couldn’t quite match her rival’s overall speed in the 16-19 knot southerly winds and had to settle for second place.

Shaw and Partners Financial Services (Steve Thomas, Lindsay Stead and Locky Prior) came back from a slow start to finish strongly in third place, one minute 36 seconds behind Yandoo.

After each team has discarded its worst performance in the championship so far, Tech2 and Yandoo share the lead on 10 points, followed by Noakesailing (Sean Langman) on 20, Rag & Famish Hotel on 23, Shaw and Partners Financial Services on 24 and Fisher & Paykel on 26 points.

Today’s race had a sensational start when two of the world’s best teams, Andoo (Seve Jaarvin) and Smeg (Michael Coxon) were ruled to be ‘on the course’ starters and failed to return.

With both teams presently out of contention in the overall pointscores, both elected to continue to sail the entire course as part of their on-going preparation for the 100th Australian Championship next month, followed by the JJ Giltinan Championship on Sydney Harbour in March.

The Andoo team actually led the race for the entire course and clearly showed that it will be a major force in the major championship over the next two months.

Team Smeg also showed that it is capable of defending the title won in 2021 and the scene is definitely set for some great racing amongst the top teams, particularly if there is more variety from the southerly winds which have dominated the races since the beginning of the season.

Tech2 has had to recover from a number of slow starts throughout the championship and today was no different.  With Andoo and Smeg not included, Tech2 was only in fifth place, behind Noakesailing, Birkenhead Point Marina, Lazarus Capital Partners and Yandoo as the fleet set their spinnakers for the long downwind leg from Clark Island to Obelisk Bay.

At the end of the first lap of the course Tech2 in Athol Bay, Tech2 had recovered to be within 30 seconds of Andoo, but the following windward leg to Clark Island was costly when the team found itself on the wrong side of the wind and lost more than 30 seconds.

While the racing at the top end of the fleet continues to produce good racing, several other teams are producing some very good, consistent results and will be able to show their true ability when the more consistent summer, north east winds prevail.

Birkenhead Point Marina (Tim Westwood, Alex Chittenden and Will Dargaville) won the Cordukes Clubhouse Trophy, which was held in conjunction with the NSW Championship race.

Race 7 of the NSW Championship will be sailed next Sunday.

Spectators can follow the race on board the club’s spectator ferry, however due to the COVID-19 policy, numbers are limited.  Booking online through the club’s website: http://www.18footers.com.au/18-footers-sailing/spectator-ferry/ is essential.