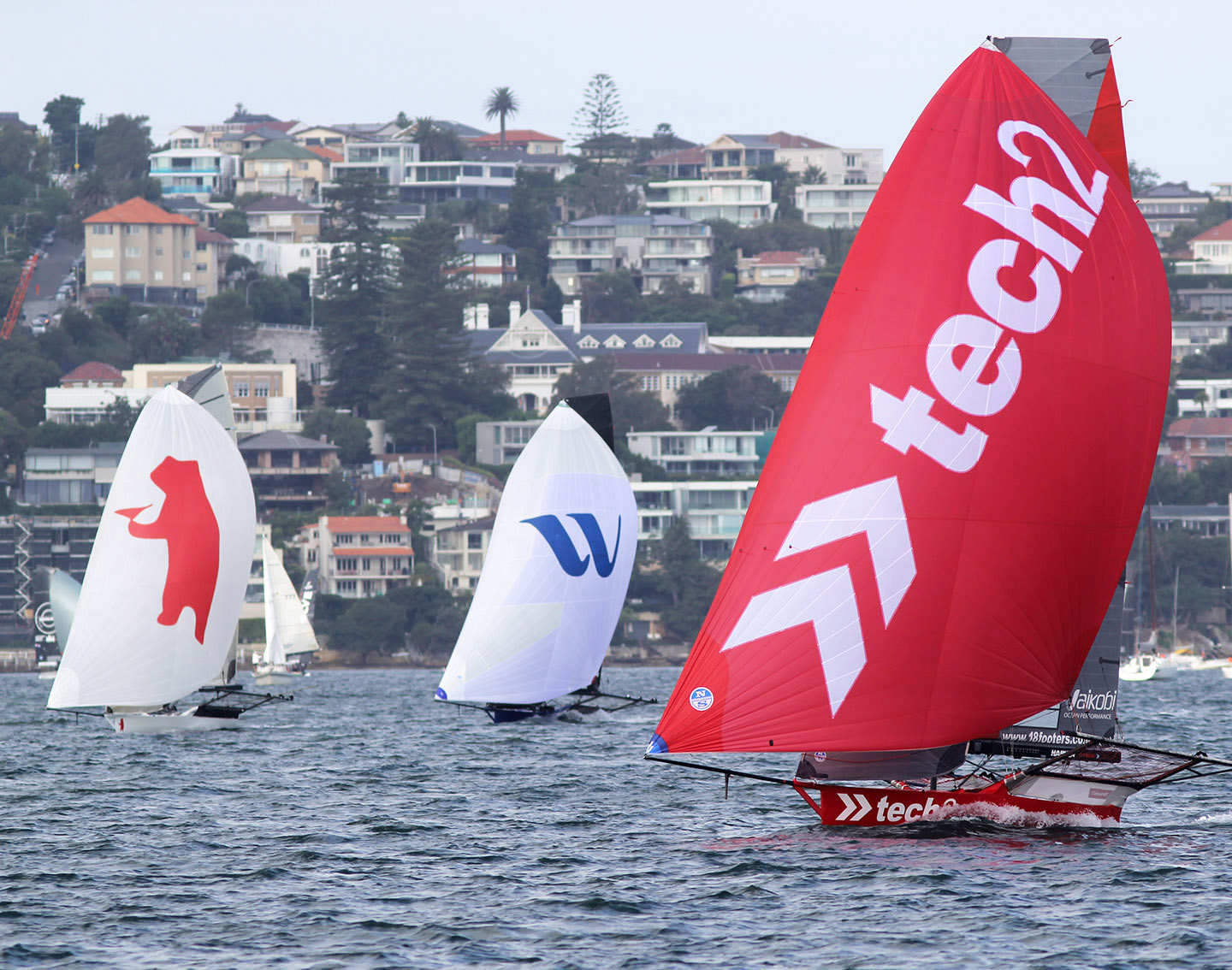 tech2 heads for the finish line with a big lead over two of her main challengers. Photo Michael Chittenden/18 Footers League.

What a difference a day made at the JJ Giltinan 18ft Skiff Championship on Sydney Harbour, when the Australian champion tech2 team came roaring back on Day 4 today, with two outstanding victories after its devastating Day 3 which had put it in a seemingly hopeless overall position. The tech2 team of Jack Macartney, Charlie Wyatt and Lewis Brake took a narrow victory in Race 5 then backed it up with a brilliant exhibition to score the double in Race 6. With a light Easterly breeze prevailing for the day’s racing, in Race 5, tech2 defeated Bird and Bear (James Dorron, Tom Clout, John Walton) by 15s with Noakesailing (Sean Langman, Ed Powys, Josh Porebski) a further 6s back in third place. Championship leader, Smeg (Michael Coxon, Ricky Bridge, Trent Barnabas) finished fourth, followed by Shaw and Partners Financial Services (Jim Colley), and Birkenhead Point Marina (Tim Westwood). In Race 6, tech2 grabbed an early lead before racing away over the two lap windward-return course to defeat Smeg by 46s. While tech2’s victory was clear, the race for second placing was exciting and very close as Smeg crossed the finish line just 2s. ahead of Bird and Bear, with Yandoo Winning Group (John Winning Jr.) only another 8s back in fourth place. The next four boats, Shaw and Partners, The Oak Double Bay-4 Pines (Aron Everett), Finport Finance (Keagan York) and Appliancesonline.com.au (Simon Nearn) finished within just 9s. With protests pending, due to be heard by an independent committee tomorrow, the provisional net points placings in the championship have Smeg leading on 10 points, followed by Yandoo Winning Group on 19, Bird and Bear on 21, Noakesailing on 25, Andoo (Marcus Ashley-Jones) and Shaw and Partners Financial Services, together on 26. Today’s double winner is a participant in one of tomorrow’s protest hearings, however, in the meantime is well back with a net score of 30 points. In the early race today, Noakesailing led the fleet narrowly to the windward mark in Rose Bay with Smeg in second place and Yandoo Winning Group third, only 8s from the lead. When Yandoo Winning Group capsized soon after the three boats set their spinnakers, it started a disappointing day for the highly-fancied team in the quest to win the 2021 title.  The team could manage only 13th place after the capsize and were less than its best in Race 6, although finishing strongly over the final lap of the course. Smeg’s net position at the moment is very strong with only three more races to be sailed., and the team also has only a sixth placing discard it can use, if required. Much will depend on tomorrow’s protest hearing if tech2 wins her protest resulting from Race 4. Whatever happens in the protest room the racing between now and Sunday should attract a great spectator crowd as there is so much close racing throughout the fleet. Race 7 of the championship will be sailed Thursday, March 11 on Sydney Harbour .

Spectators can follow the racing on board the club’s spectator ferry, however due to the COVID-19 policy, numbers are limited.  Booking online through the club’s website www.18footers.com is essential. https://www.18footers.com.au/18-footers-sailing/spectator-ferry/