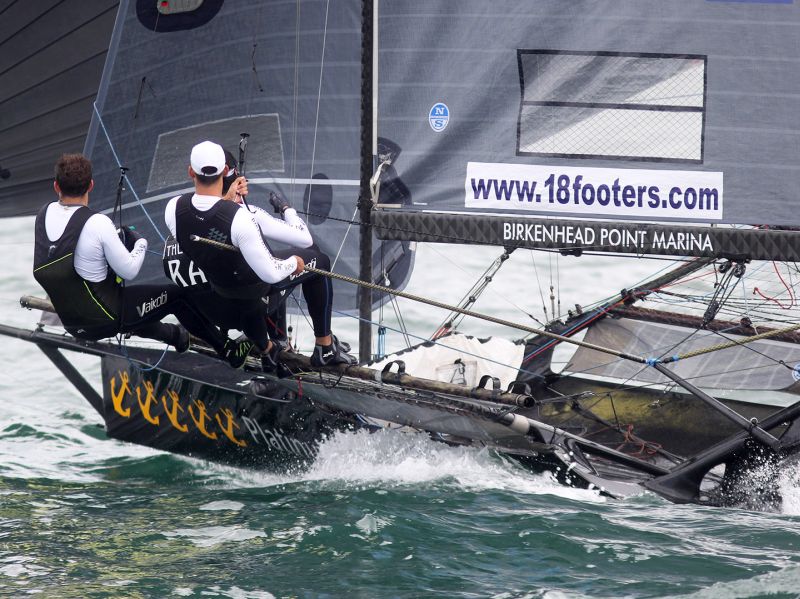 23/11/2020
The Australian champion tech2 team of Jack Macartney, Charlie Wyatt and Lewis Brake took out Race 1 of the NSW 18ft Skiff Championship on Sydney Harbour today after three boats were ruled out of the race for being over the start line within one minute of the start.
It was a critical decision as the defending champion Winning Group team of John Winning Jr., Seve Jarvin and Sam Newton actually sailed the course and finished just ahead of the official winner, tech2.
tech2's official win was a healthy 1m57s from The Oak Double Bay-4 Pines team of Aron Everett, Courtney Mahar and Charlie Gundy, with Yandoo's team of John Winning, Mike Kennedy and Jasper Warren another 9s further back in third place.
Keagan York's Finport Finance came home strongly over the latter half of the course to finish in fourth place, ahead of Shaw and Partners Financial Services (Jim Colley) and Andoo (Marcus Ashley-Jones).
The race was sailed in light, patchy North-East wind, between 7-15 knots, and gave the crews in the 18-boat fleet a difficult time as each team went in search of the best breeze on both the windward and downwind legs of the course.
From the start, Winning Group was well placed and led for almost the entire first leg to the Beashel Buoy windward mark.  Rag & Famish Hotel (Anthony Young) was also ruled out for the same infringement as Winning Group and trailed Winning Group as spinnakers were set for the run back to the wing mark off the southern end of Shark Island.
Officially, the young rookie Vintec team (Tom Cunich), which was extremely competitive with the first two UFD teams, led the fleet from Yandoo, Finport Finance and Andoo.
tech2, whether aware of the Winning Group situation or not, lost at least 30s on the work when the team paid a 180-degree penalty for a breach of the port-and-starboard rule with Winning Group midway up the first beat.
The breeze was very light and teams chose a wide variety of courses as they sailed to the Shark Island wing mark.
Vintec showed good pace to maintain her position ahead of Yandoo, but the tech2 team was already starting to show great downwind speed and moved ahead of Andoo for the run between Shark and Clark islands.
While Winning Group was a non-competitor the race with tech2 held much interest for the spectator fleet as the two champion teams battled for the lead.
By the end of the first lap of the course at Clark Island, Winning Group led by 15s before extending this margin to 1m20s over tech2 at the following windward Beashel Buoy mark.
Winning Group was definitely faster upwind but tech2 was superior on the spinnaker runs and had reduced the margin again at the end of the second lap.  At Clark Island tech2 was back to within 2-3 boat lengths of the leader.
The race behind the pair was extremely close with little between Yandoo, The Oak Double Bay-4 Pines and Andoo as the trio chased the official leader.
Finport Finance had a forgettable first lap of the course but the talented team was starting to move through the fleet and a battle with the Shaw and Partners team developed.
The breeze was fresher as the fleet completed the final lap of the course but didn't change the difference between the Winning Group and tech2 teams.  Winning Group had extended her lead to 30s back at the top mark before having to hold on grimly to cross the finish line just ahead of tech2.
For the 'veteran' Yandoo team, it was another great performance and continued the team's excellent form through the season so far, which saw it take out the seven-race Spring Championship series last week.
Although conditions were far from perfect, the racing showed that there is little between group of boats and spectators should benefit from some great racing over the coming weeks in the NSW Championship.
Race 2 of the NSW Championship will be conducted next Sunday, November 29.
Spectators can follow the racing on board the club's spectator ferry, however due to the COVID-19 policy, numbers are limited. Booking online through the club's website www.18footers.com is essential. https://www.18footers.com.au/18-footers-sailing/spectator-ferry/
For those unable to make it out onto the water, AeroMedia Live Broadcast team will be on Sydney Harbour to capture all the action.  Live streaming is available at www.18footers.com by clicking on the '18 Footers TV' link.
– Frank Quealey, Australian 18 Footers League