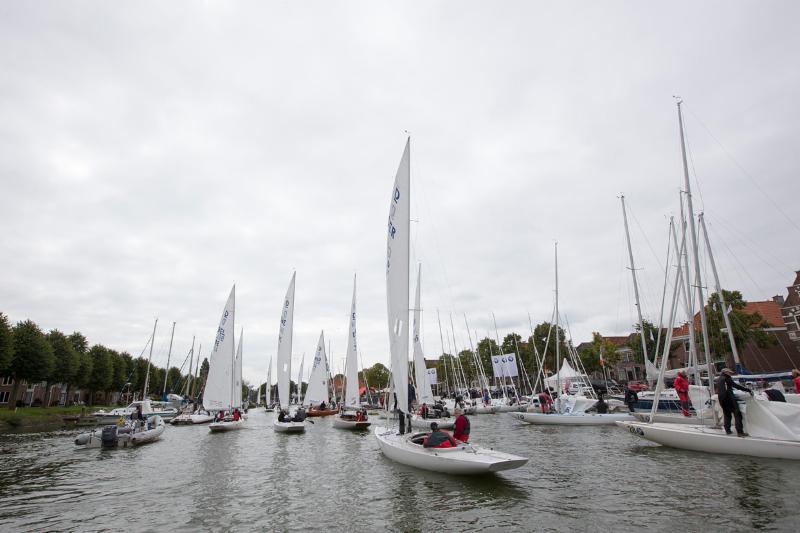 Medemblik, Netherlands – Gale force winds meant that the practice race for the Yanmar Dragon Gold Cup 2019 in Medemblik had to be cancelled, and craning of the arriving boats suspended for a period.

With winds regularly gusting to 40 knots and frequent heavy rain there was little the teams could do but complete their shoreside administration, secure their boats and head out to do some sightseeing or take advantage of the many wonderful restaurants the area has to offer.

With 96 Dragon teams to register, check measure, crew weigh, launch and moor up, it’s just as well the superbly organised volunteers of the Royal Netherlands Yacht Club, the Royal Yacht Club Hollandia and the Dutch Dragon Fleet have so much experience of major regattas.

From arrival at the registration desk until they received their registration completion gifts of Code Zero crew polo shirts and hats and a crate of Dragon Gold Cup Special Ale courtesy of Lakeview Consultancy, the volunteers did a great job.

Fortunately, the strong winds are expected to blow through overnight and the sun is due to return for the first race of the championship. The Race Committee has announced that it will delay the start of that first race from noon until 13.00 to allow extra time for the remaining boats to be launched.

The entire fleet will start as one throughout the week, there is no discard in the series and the windward leeward race courses are particularly long, meaning that conservative and consistent sailing are essential to success. Experience will clearly count for a lot and this Dragon fleet is certainly not short of that.

At 75 years young Poul Richard Hoj-Jensen is without doubt one of the world’s most accomplished keelboat sailors. His Dragon experience takes him back to the class’s Olympic years winning a Silver Medal for Denmark at the 1968 Mexico City Games.

After the Dragon was dropped from the Olympics Hoj-Jensen moved into the Soling and won Gold at both Montreal in 1976 and Moscow in 1980. He continued to race the Dragon though and is one of the most successful helms in the class’s history.

With five wins (1990, 1992, 1994, 1997 and 2008) he certainly has the most Dragon Gold Cup victories to his name. In his professional life, Hoj-Jensen played a huge role in ensuring the Dragon Class retained its extraordinary heritage whilst encompassing leading edge technical development.

He is now retired and sails purely for pleasure and would suggest to you that he is no longer competing at the top level. But no one in this fleet would ever discount the sailor they call simply “The Man”, especially when racing at one of his favourite venues, where he won the 2009 Dragon World Championship.

Defending Gold Cup Champion Jørgen Schönherr, another Danish sailing legend, has won the trophy four times (2018, 2005, 2004 and 2003) and must surely have hopes of equaling Hoj-Jensen’s record with another victory this year. A master of multiple classes including World Champion in the 505 (1990) and the Flying Dutchman (1999), he returns with his winning crew of Christian Videbeak and Theis Palm.

The forecast for the opening day of racing promises sunny skies and a south-westerly wind of 10 to 15 knots. The schedule calls for one race per day for the six days of the competition, although the race committee does have the option to race two races in a day if required.