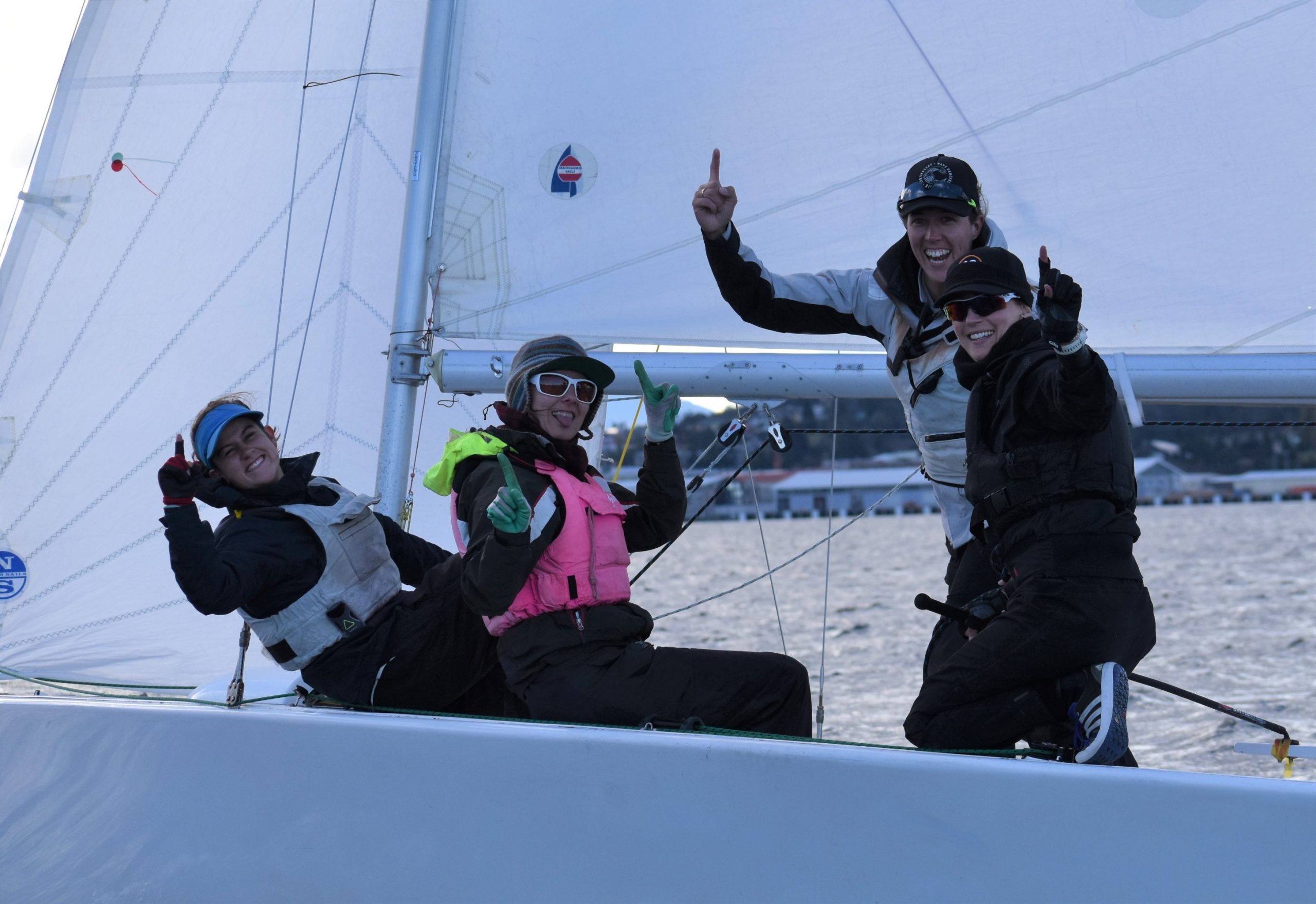 The unpredictable River Derwent kept Race Officer Ian Ross and the 48 female sailors on their toes with big wind shifts throughout the day, with the heaviest conditions kicking in from the south west at 15+ knots for the Gold and Silver Fleet finals.

Salter was expected to do well in the event and didn’t disappoint, starting with a second place in the first flight of the Yellow Fleet Qualifier. A frustrating sixth in the next flight put the team on notice but a second in the final flight saw them sneak through to the Gold Fleet final on 10 points.

Charlotte Armstrong (Kingston Beach Sailing Club), skipper of the youngest team in the regatta, was the top qualifier from the Yellow Fleet with three wins from three races (3 points) and was the hot favourite while Lauren Keil (Midway Point Yacht Club) finished on 4 points.

In the Blue Fleet Qualifier, Chloe Abel was the top performing boat on 4 points from Clare Brown on 5 points and Felicity Allison (10 points), all representing the Derwent Sailing Squadron.

The intense competition and on-water rivalry was evident off the start line in the Gold Fleet final tactics and tight racing the order of the day. An incident at the top mark on the first lap saw Brown and Armstrong take a penalty turn each which cost them podium positions.

Salter held a small but consistent lead after the first lap. Abel, not content to follow Salter around the track, tacked away to the left side of the course but fell into softer air, failing to get through Salter, who increased her lead to take out the event from Abel and Allison.

Salter credits her win to some early on-water training sessions with husband Julian Salter, and to the strong experience on her team. “The training sessions were important for us and while the weather was challenging, the top sailors were always at the front end of the results,” said Salter.

The event culminated in a social function where Her Excellency, Professor the Honourable Kate Warner, AC, Governor of Tasmania, presented the winning teams with their prizes. Guests also heard from female media trailblazer, Tiffany Cherry, and around the world offshore sailor, Jessica Watson.

The event, hosted under Australian Sailing’s SheSails program to encourage female participation in all aspects of sailing, was a resounding success, with calls from across the fleet to make it an annual event.