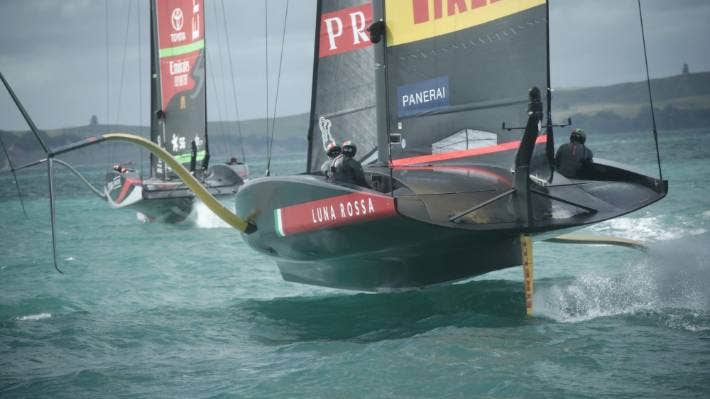 Team New Zealand again looked impressive as the British and American challengers were absent when the second round of official America’s Cup practice was held in Auckland on Thursday.

Emirates Team New Zealand put on a show of strength as they were left to battle against challenger of record Luna Rossa in a late afternoon session delayed by strong winds.

Doing practice starts under the eye of regatta officials once again, Team New Zealand controlled the opening exchange. In the second “race” they were in complete control against the Italians and in their third duel, used a burst of startling speed to overhaul them.

Thursday’s practice session was again held in the Course E zone off the Bucklands Beach area and how much can be read into these early training exercises remains to be seen, but Te Rehutai’s speed continues to be a standout feature.

The absence of the other challengers was a disappointment and a particular blow to Sir Ben Ainslie's INEOS Team UK.

It leaves them without any boat-on-boat action this week after failing to start the first practice session last Tuesday when they suffered damage in the lead-up. That is thought to be an issue with their mast, which forced them to return to their base in a painfully slow tow.

While American Magic made a strong start to that initial session, they experienced some late issues, with speculation centring on their rudder area.

Read the full story and see more pics at Stuff.