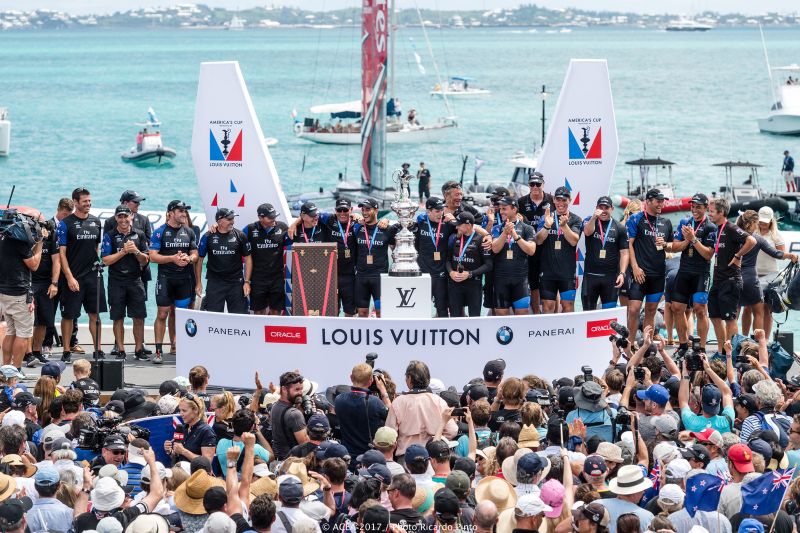 Up until the 1960’s only two countries, Canada and Great Britain, could lay claim to having challenged for the America’s Cup.

Through 17 attempts, the closest either came to victory was 3-2 in 1920 and 4-2 in 1934. The unbeatable Americans, and a winning streak which had passed ten decades, entered the realm of legend drawing out the fighting spirit in sailing nations around the world.

Throughout the 70’s and 80’s, Australia, France, Italy, and Sweden joined Great Britain and Canada in attempts to claim the ultimate prize in sailing. Again and again, Australia emerged victorious in the Challenger Selection Series, winning the right to challenge for the Cup six times out of the next seven. Then finally in 1983, Alan Bond on his fourth attempt, with a team sailing the secrecy-shrouded design marvel, Australia II, stole the show and moved the oldest trophy in sport down under to the South Pacific.

With the regatta now next door in Fremantle, New Zealand decided that anything the Aussie battler could do, they could do better, and Sir Michael Fay entered KZ-7 (Kiwi Magic) in the 1987 Challenger Selection Series. 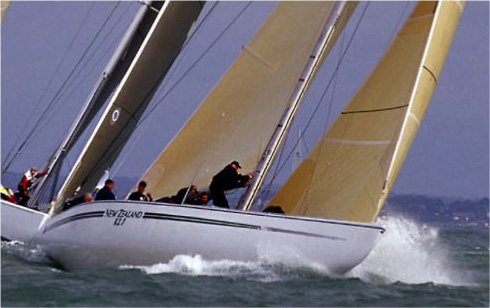 Right from the start, innovation and a willingness to think outside of the box were evident in the challenge, with KZ-7 sporting a fiberglass hull when the 12-metre norm was aluminium. Called “cheats” by New Zealand’s long-time frenemy Dennis Conner, KZ-7 nevertheless dominated the entire Selection Series all the way through to the finals. It was only a lack of finals experience that couldn’t trump Conner’s cunning and Stars and Stripes speed.

The gutsy debut performance hooked a nation, and a love affair with the Cup was born. Taking innovation in an unlikely direction, Sir Michael Fay, with a strict reading of the Deed of Gift and the New York Supreme Court, engineered the Big Boat Challenge in 1988 instead of another traditional 12 metre regatta. 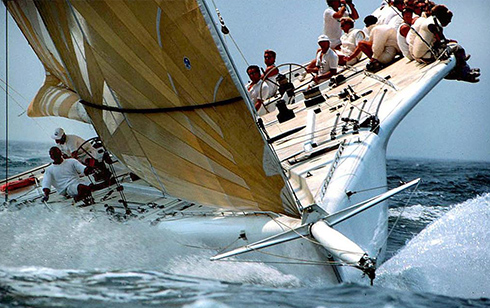 While a mismatch on the water, the innovation and change of tack the Kiwi challenge attempted ushered in a whole new era of America’s Cup racing with the development of the International America’s Cup Class yachts to replace the aging and now quite slow 12 metres.

In 1992, Michael Fay and the New Zeeland team pushed the limits once again launching NZL20, a boat with twin keels and no rudder. Again, they dominated the Selection Series, all the way through to and into the finals, before their innovation, and an unconventional bowsprit was targeted by the clever lawyers of the Italian challenger ‘Il Moro di Venezia'. With their wind stolen, the Kiwis came up short, just two wins away from making their first America’s Cup match.

The Kiwis were finding their stride now and knew the game from water to rule book. In 1995, strong leadership by Sir Peter Blake and an innovative two boat development programme delivered another dominating force throughout the Challenger Selection Series, but where previous teams faulted in 87, 88, and 92, Black Magic and her crew delivered an impressive exhibition of effortless sailing supremacy, wining the Louis Vuitton final 5-1, and the America’s Cup Match 5-0. 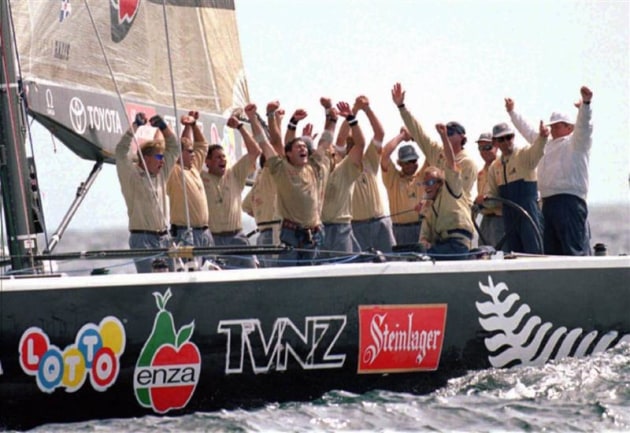 The America’s Cup was heading back to the South Pacific, this time to New Zealand.

The Cup had now been wrested away from America twice, but in its 150-year history, it had yet to be successfully defended outside of the United States. When the 30th edition of the America’s Cup got under way in Auckland, New Zealand, in the summer of 2000, it was no surprise that 11 challengers, including five different American teams, were out on the harbour looking to make it as difficult as possible for the New Zealand Team.

The Selection Series that followed produced some of the closest and most thrilling racing in America’s Cup history. Prada Challenge from Italy and America One made the final and went all the way to nine races trading wins back and forth before Prada eventually emerged the winner.

While many thought the impressive display of speed and skill throughout the Selection Series heralded something spectacular in the Cup final, Team New Zealand walked away with the first successful defence outside of America, emphatically beating Prada challenge 5-0.

The Kiwis were looking unbeatable.

If this was a Hollywood movie, the start of the second act was perfectly timed by the defection of the tight-knit core of key members right at the peak of the team's sailing prowess. One day Team New Zealand were the undisputed kings of sailing, the next they were David, looking at a likely outcome of going head to head with the Goliath they had helped make.

Alinghi and their former teammates did indeed make the America’s Cup Final, and it turned out the Kiwi team had hamstrung themselves by being too innovative and too ambitious. Perhaps feeling the lack of experience and expertise that had jumped ship, the team pushed too far with the result being a boat which might have been quick, but lacked the reliability to put up a successful Defence.

Alinghi won 5-0 easily and took the America’s Cup back to Europe for the first time since 1851. 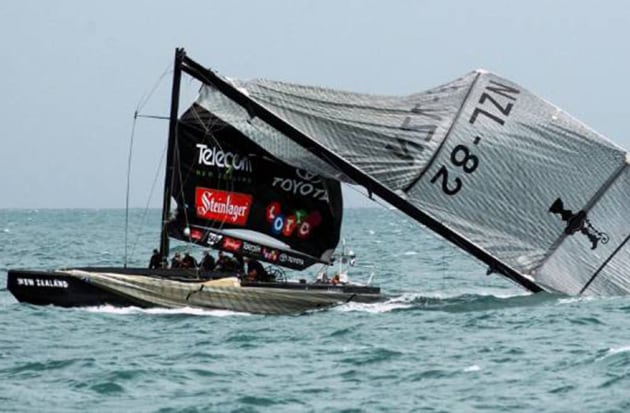 A turn of the page and the third act begins, the team brought on new sponsors, new partners and hired new blood. Team New Zealand become Emirates Team New Zealand and with a mix of old and new personnel, Grant Dalton took the reins and began to rebuild the team. The desire to innovate remained at the heart of the team, as it had from the beginning, but this time it was tempered with a realistic approach to make the impossible more probable but without sacrificing reliability.

With the rebuild complete, boat and team returned to their dominant ways in Valencia, easily making their way through the Challenger Selection Series before taking the Final 5-0 from Luna Rossa. The team had worked hard, the racing had been fantastic, and the venue was amazing, all they had to do was take the fight to their old team mates in the hot winds off the coast of Spain and win five more races.

Going into race 7 of the America’s Cup Final, Emirates Team New Zealand were down 4-2 in what was very close racing, Alinghi had a fractional boat speed advantage, but New Zealand knew how to make the most of every opportunity and had hung in there. Leading, and within sight of the line, ahead by 180 metres, Emirates Team New Zealand had only to perform a penalty turn before Alinghi hit the line to keep the series alive. It was not to be, they turned too early and Alinghi pipped them by 1 sec. The 32nd America’s Cup was over.

The 5-2 loss was not the victory they had hoped for, but they were back to their fighting ways and were on a road they knew how to travel, if they kept at it, it was only a matter of time.

Then Emirates Team New Zealand faced one of the toughest periods of its existence, by trying to survive while a protracted legal battle between Larry Ellison and his Oracle team and the Defender Alinghi resulted in a Deed of Gift challenge, which would exclude all other teams. The result was that for the first time since 1987, New Zealand wasn’t going to be at an America’s Cup regatta and for the first time since 1995, the Kiwis weren’t on the America’s Cup match start line.

Ellison and Oracle Racing ultimately won the battle of the giant multihulls and just as it did in 1988, the 2010 Deed of Gift match signalled the end of what had been the current class, after five fantastic editions the IACC was done and the Cup was gaining speed again. In 2013, teams would race 72-foot catamarans on San Francisco Bay.

As strong as they were, as experienced as they could hope to be, and with a design that took the world by storm, Emirates Team New Zealand foiled a 72 foot catamaran through a loophole in the protocol for the 34th America’s Cup. The new class of cat was never meant to foil, the rules themselves were written in such a way to make it near impossible, but the Kiwis found a way.

The introduction of foiling was revolutionary in the sport, and the other teams in the 34th America’s Cup were playing catch up from the moment a debate started to rage about whether an image of an Emirates Team New Zealand foiling catamaran was real or photoshopped.

As it was, Emirates Team New Zealand looked to have sailed away with the America’s Cup, racing out to an 8-1 lead before Oracle and their substantial resource caught up and found their pace winning 8-9 in the winner takes all final race. 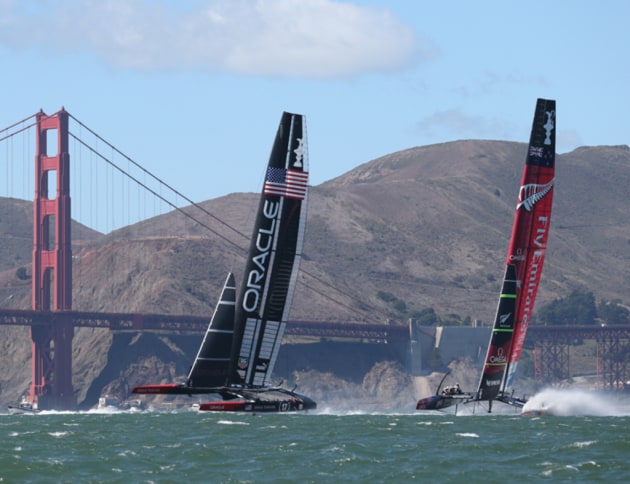 Getting as close as they did, and still coming up short was a heart-breaking result followed by a tough period for the whole team, but not the end of the road, or the end of the story.

As always, design-driven by innovation and out of the box thinking, produced an AC50 foiling catamaran which out-classed every other team in what was meant to be as close to a one design match as an  America’s Cup could get. Even a near catastrophic capsize during the Challenger Selection Series could not hold the kiwis back, and when they made the America’s Cup final, they ran away with it 7-1.

Every year, every challenge, has seen the Kiwis innovate the world of sailing, doing it with an almost crazy zeal for chasing the seemingly impossible. Since 1987, they have been in nine of the last ten regattas and on the America’s Cup start line six of the last seven matches. There have been plenty of highs and plenty of lows, but surviving and innovating is what Emirates Team New Zealand do as a team, it’s what they do as a nation, sailing is in the Kiwi DNA, and giving it everything is in their blood.

Will history repeat again? Is a second successful defence on the cards? In 2021, Emirates Team New Zealand will give everything again in an attempt to defend and ultimately win the America’s Cup for the fourth time.