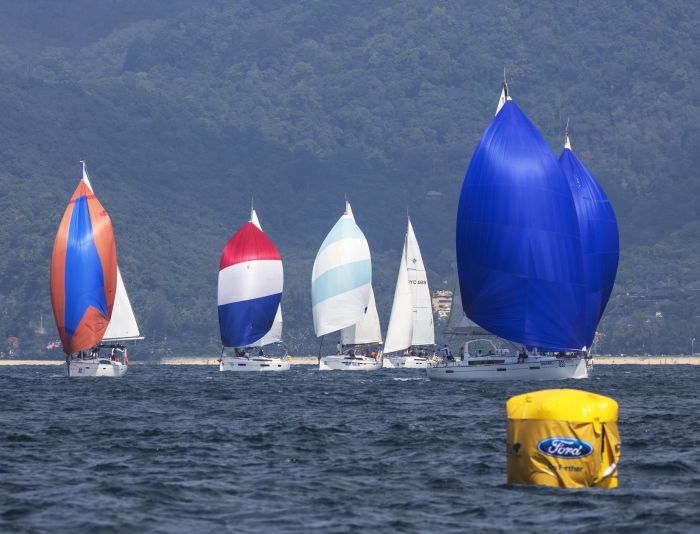 4 December 2019, Phuket – Thailand’s former world Optimist champion and two-time Asian Games gold medalist Noppakao Poonpat transferred her skills from the small boats to the big ones to register a first and second in the two races held on Wednesday at the 33rd Phuket King’s Cup Regatta.

Steering the 52-foot Thai-registered THA 72 in shifting winds and difficult conditions, Noppakao’s boat finished second in the first race and took the honors in the final race in the top flight IRC Zero class yesterday.

However, her efforts were not enough to take the overall lead in the class, which went to Australian veteran and defending champion Ray Roberts on Team Hollywood. Roberts’ boat also registered a first and second in Wednesday’s racing to maintain his overall lead in the IRC Zero class.

“We had very good teamwork today,” Noppakao said after the end of the two races. “We also had a lot of fun. Hollywood is very good – they are very good competitors.”

Nick Burns and Sarab Singh are third overall on WindSikher, and with two more days of racing to go, the contest is wide open.

Russia’s Alexey Mashkin didn’t have a great day on the water on Wednesday, but a third and second place finish in the two races contested were enough to keep him in the overall lead of the IRC 1 class on his boat MegaZip.

Hot on his heels in overall second place isJapan’s Nanamori Yasuo on Emagine, with countryman Kazuki Kihara on Char Chan a close third.

Chinese skippered boats were first and third overall in the IRC 2 class, with Shen Sheng on Kata BigBoys Sailing Team stretching his lead with second and third place finishes on Wednesday. Steering one of the smallest boats in the class and separating the Chinese skippers was Morton Jacobsen on his agile little boat Over Here.

Bringing up third overall in the IRC 2 class was Minzhi Feng on Highland Encoragers, whose results are getting better by the day.

Two Hong Kong boats are leading the Premier class after five races, with Geoff Hill on Antipodes holding a narrow lead over Peter Cremers on Shahtoosh. Thailand’s Ithinai Yingsiri is in third place on Pine-Pacific.

In the Multihull Racing class, Australian Dan Fidock made it six wins from six races on his boat Fugazi to extend his overall lead over Germany’s Gaetan Verhegge on Team Red Blood and Great Britain’s Dan Moore on Frankenstein.

One of the highlights of the regatta is the International Dinghy Classes for sailors and on Wednesday a clinic was held as well as the first races. The special guest at the clinic was John Doerr, a member of the World Sailing International Jury, who kindly shared and updated the dinghy sailors on the rules.

The aim of the clinic was to help youth sailors improve their skills and knowledge.

A total of 126 sailors are racing in the International Dinghy Classes, which are being held off Kata Beach, with members of the Royal Thai Navy playing a key role.

Winners of the other youth classes were Weka Bhanubandh in the Optimists, Suchakree Detthotsapol in the Laser Radial, Paliga Poonpat in the Laser 4.7 and Jarupong Meesusamsen in the Laser Standard class.

Wednesday’s racing and prize giving event was sponsored by RMA Group and Ford. Thursday is a rest day at the Keelboats and Multihulls will start again on Friday and finish on Saturday.

There are five days of racing for the keelboats and multihulls, with a reserve day on Thursday, 5th December. For the International Dinghy Classes, four consecutive days of racing were scheduled from 4-7 December as well as IOMC.