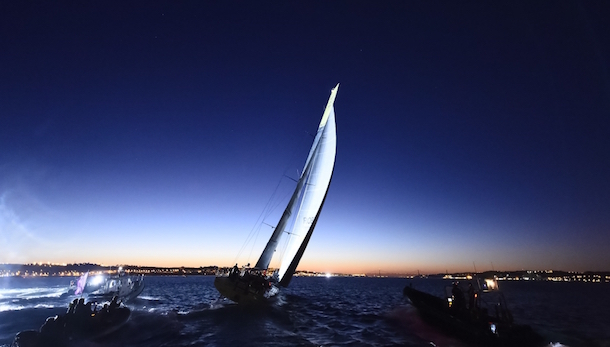 Team Brunel (Bouwe Bekking/NED) completed a triumphant Leg 7 early on Wednesday to bolster their hopes of finishing with a podium place in the Volvo Ocean Race and also keep alive the possibility of overall victory.

The Dutch boat sailed a near faultless transatlantic stage, edging MAPFRE (Iker Martínez/ESP) into second, just under 22 minutes behind.

If Abu Dhabi Ocean Racing finish fifth that could open the door again for Team Brunel, currently third overall, who would move within six points of the Emirati boat.

Few sailors in the fleet will savour a win over one of the race’s trademark legs more than Team Brunel’s 51-year-old skipper, Bouwe Bekking, in his record-equalling seventh appearance.

He has certainly experienced the ups and downs of sailing the Atlantic. Few will forget the agonising position he faced in 2006 before he was finally forced to abandon his sinking movistar boat during the same stage of that Volvo Ocean Race.

Bekking insisted last week that he had not lost ‘a single night’s sleep’ over the incident and the confident way that Team Brunel sailed the leg would bear that out.

Team Brunel were harried all the way over the past 24 hours by both MAPFRE and Dongfeng Race Team, especially over the final few miles in a ‘park-up’ in the Tagus River as they approached the Lisbon finish.

“We sailed a tremendous leg but just at the end when there was no wind, it was getting a bit gnarly,” said Bekkiing. “But we pulled it off.”

The victory was achieved with two newcomers on board, Adam Minoprio (NZL) and Timo Hagoort (NED), the latter replacing the injured Gerd-Jan Poortman (NED).

“It was good to have those young guys on board, they did a fantastic job,” added Bekking.

The final two stages, to Lorient (France) and then Gothenburg (Sweden) via a pit-stop in The Hague (Netherlands), will once again be contested by seven boats.

Team Vestas Wind (Chris Nicholson/AUS) rejoin the fleet for the first time since November 29 when the boat was grounded on a reef in the Indian Ocean.

After a four-month rebuild in the Persico boatyard in Bergamo, Italy, the boat was transported by sea and road to Lisbon, arriving a few hours before the rest of the fleet in the small hours of Wednesday morning.

Over the next few days, the rig will be stepped ahead of the Danish-backed team’s competitive comeback on June 6 in the Lisbon In-Port Race. Leg 8 to Lorient, a relative sprint at 647nm, begins a day later.

The race concludes on June 27 with the In-Port Race in Gothenburg after nine months and 38,739nm of sailing, visiting 11 ports and every continent.