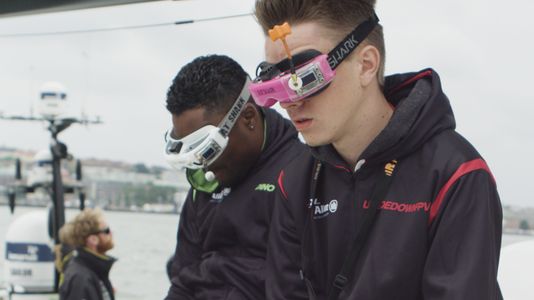 Two of the toughest professional sports, The Drone Racing League (DRL), the international, premiere drone racing circuit, and Team Brunel, who're still battling for the overall win in the Volvo Ocean Race 2017-18, teamed up to create a daring Drone x Ocean Racers video, featuring the best pilots and sailors zipping along the coast of Gothenburg, Sweden.

With the video Team Brunel and DRL share the passion for extreme speed, world class engineering and legendary race locations.

The clip shows DRL pilots Niklas “UpsidedownFPV” Solle and Dino “Dino” Joghi show off their freestyle flying skills with custom-built DRL Racer3 drones, launching from the bow of the high-performance Team Brunel boat. Soaring at 90 miles per hour, the pilots flip, twist and swirl their drones through turbulent 15-knot winds, nosedive down 150-feet high cranes, and whip around the 66-foot long sailboat as it rocks over choppy waves. The rough conditions caused a DRL drone to free-fall and drown in the water and a photography drone to crash on top of a crane (both were later rescued).

“Bringing the sport of the future to the ocean was a fierce adventure,” said DRL CEO/Founder, Nicholas Horbaczewski. “We’re excited to have collaborated with Team Brunel, who like DRL, challenges elite athletes through highly competitive, insanely fast racing in spectacular spots around the world, while testing the true racing skills through identically designed technology: DRL pilots fly the same drones and Team Brunel sails the same boats as their competitors.”

“It was an absolutely amazing experience to fly DRL racing drones from Team Brunel’s sailboat. It felt crazy to fly around from a swaying, turning boat while watching it sail from the perspective of my FPV goggles,” said DRL Pilot UpsidedownFPV.

“Flying a DRL drone from a heeling boat was definitely one of the most memorable freestyle sessions I’ve ever had. It was also interesting to have to deal with the wind in an opposite way to the sailors. While the ocean racers used the wind to spin and push the boat forward, UpsidedownFPV and I had to avoid getting our drones caught in same wind,” said DRL Pilot Dino.

The DRL Pilots boarded the boat after teaching FPV (First Person View) flying in an abandoned factory to quad-obsessed, Team Brunel sailors Peter Burling (NZL) and Kyle Langford (AUS). Next to the sailors On-board-reporter Sam Greenfield (USA) was involved. Greenfield is known in the sailing world for being the first OBR to bring in the drone to offshore sailing.

Burling: “It was amazing seeing the skills of the DRL pilots and what they could get their drones to do. Also amazing to be able have a go with one of their pro drones. I definitely will need a few more hours before I will be able to actually fly it around all by myself.”

Langford: “Flying the Racer3 drone was incredibly difficult. I have flown drones before but the sensitivity and power of the Racer3 isn't comparable to anything I've flown with before. I gives you a great appreciation for how skilled the pilots on the DRL are and how many hours of training you need to put in to it to get to their level.”

Greenfield: “I got bit by the FPV bug a few weeks before Brunel said I was going to meet the DRL pilots so the entire experience was a dream come true. Like getting to learn how to drive a car with F1 drivers. I've been obsessed with filming from drones since I introduced them to the VOR last edition, but FPV is next level. I can't wait to take it on.”