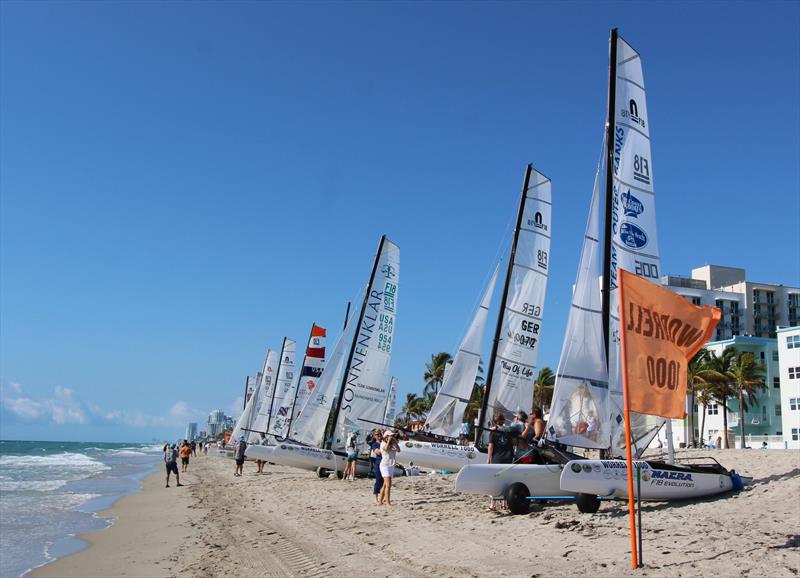 The Worrell 1000 Race is an offshore long distance beach catamaran sailboat race that is held from May 9-22, 2022.

The race runs in the waters between Florida and Virginia Beach, VA. The race will cover approximately 1000 miles with overnight stops at multiple locations along the East Coast of the United States. Sixteen boats are competing in the event.

The Sunday evening skipper’s meeting began with a remembrance of those Worrell alum we have lost.

After folks were encouraged to offer names, a moment of silence in their honour was observed. The meeting followed, as such skipper’s meetings do, and ended with the official team weigh-ins. Overall, the mood was good! Spirits were high and everyone was looking forward to the start the next morning.

Monday brought a steady northeast breeze with a small, two-foot shore break. Following the morning briefing, a general, rising tension was evident throughout the fleet. The leg was looking to be a steady, upwind beat – not what the sailors were hoping for. There are a lot of seasoned, Worrell veterans rubbing elbows with first timers – but even the veterans were not immune to the pervasive apprehension.

The first horn sounded, signalling one minute to the official five-minute start. Boats inched and slid forward nervously. The Race Committee had set a generous line and cautioned the fleet to comply with the sailing instructions, requiring them to stay within their lane until through the surf.

A port start was dictated by the Beach Captain – done so for safety. Down to one minute to the start. The excitement was catching on – onlookers starting cheering and yelling and the team “pushers” were at the ready. The final horn sounds and off they went – seeming to have a hard time getting through the surf at a good pace, some bobbed and floundered. Others – took off and were double trapped within minutes of the start.

In Jensen – Team Rudee’s, skippered by six-time Worrell champion Randy Smyth with his crew, Dalton Tebo finished first in six hours 28 minutes and 25 seconds – a full 35 minutes ahead of the second-place finisher, Team Fast Forward Composites, skippered by yet another Worrell alum, Tommy Gonzales with crew Sam Ingham in six hours, 53 minutes and 33 seconds. Third to the finish were the defending champions, Team Australia – Rod Waterhouse and Chris Way – coming in at six hours, 57 minutes and 4 seconds.

With a foreboding forecast for Tuesday, the fleet wrapped up the day in the dark, arranging their boats to comply with local sea turtle protection ordinances and carrying flashlights to police up their gear and parts before retiring for the night. Some folks were fortunate enough to enjoy a civilized dinner time and rest – others – not so much.

On day two, Team Australia arrived at 10pm and in first place.

What will the next leg bring? It only takes one bad flip in the surf to completely change things around.

For more information about the event, visit worrell1000race.com and follow us on social media: