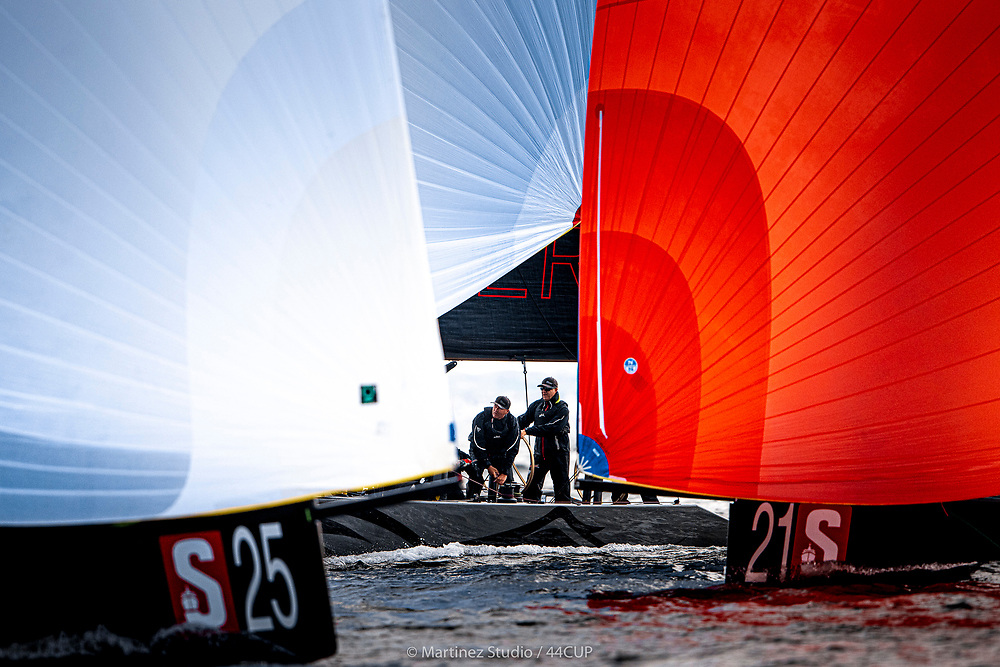 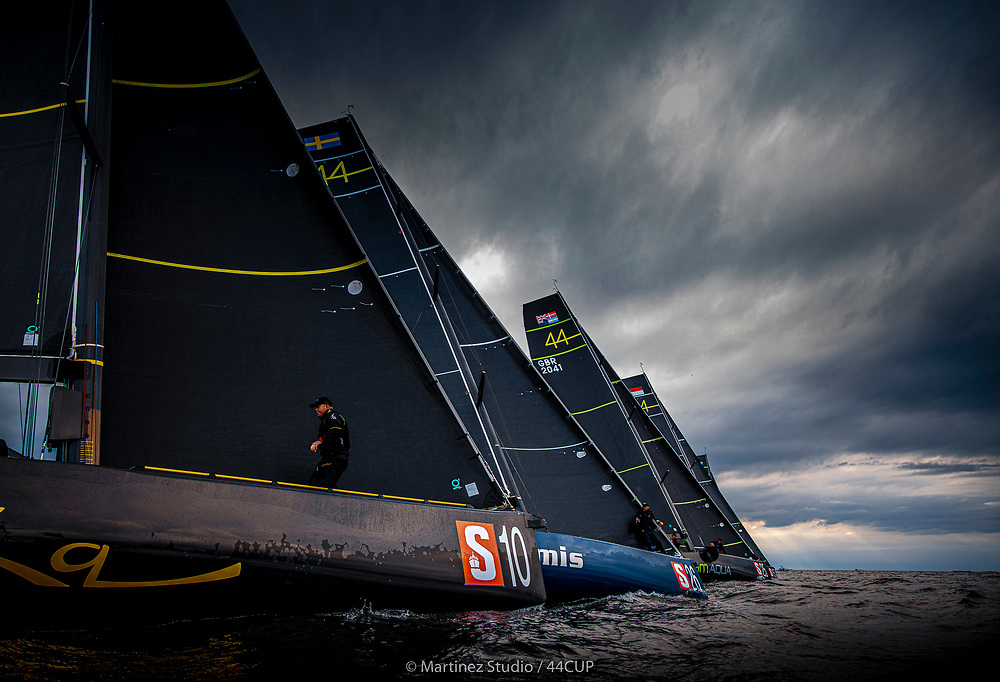 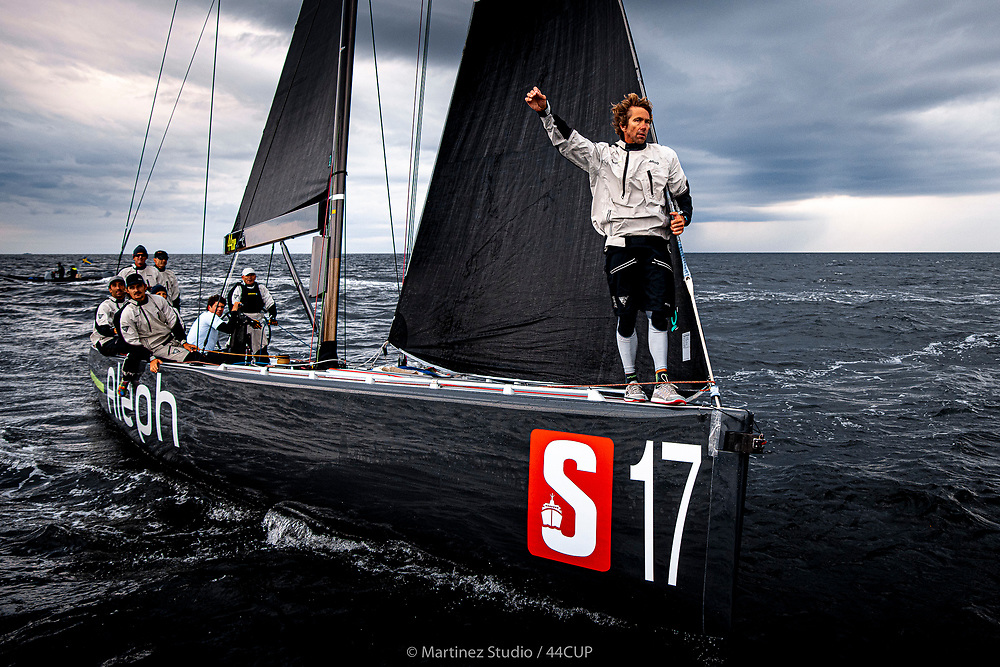 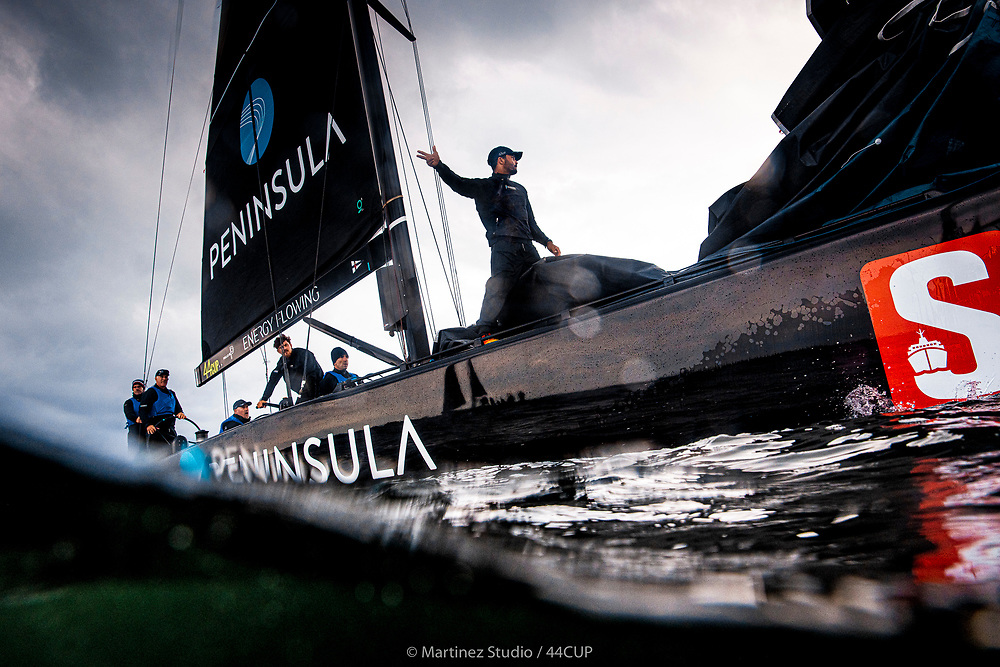 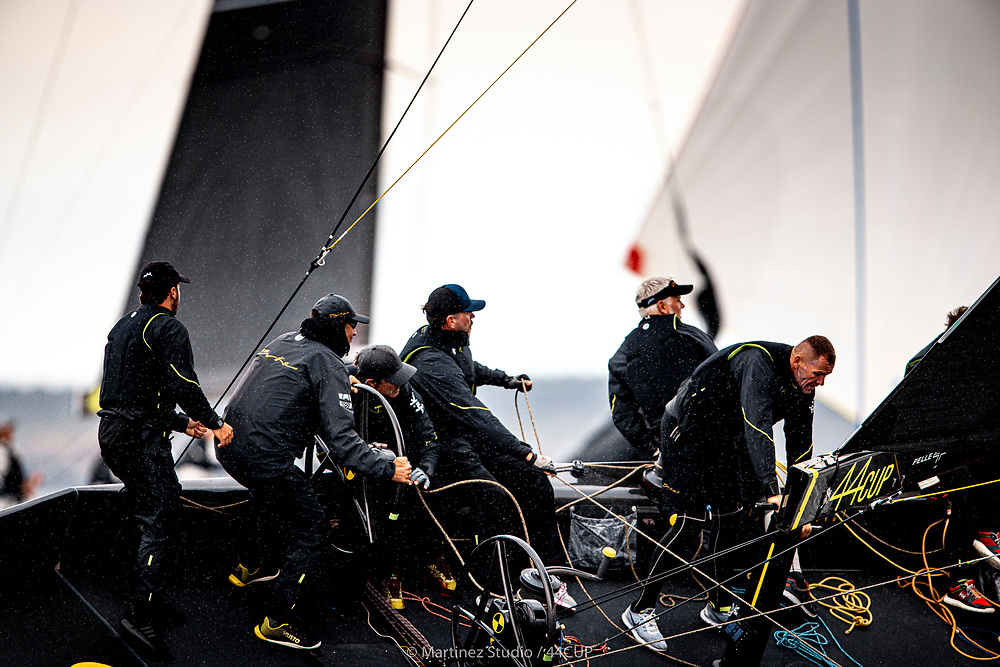 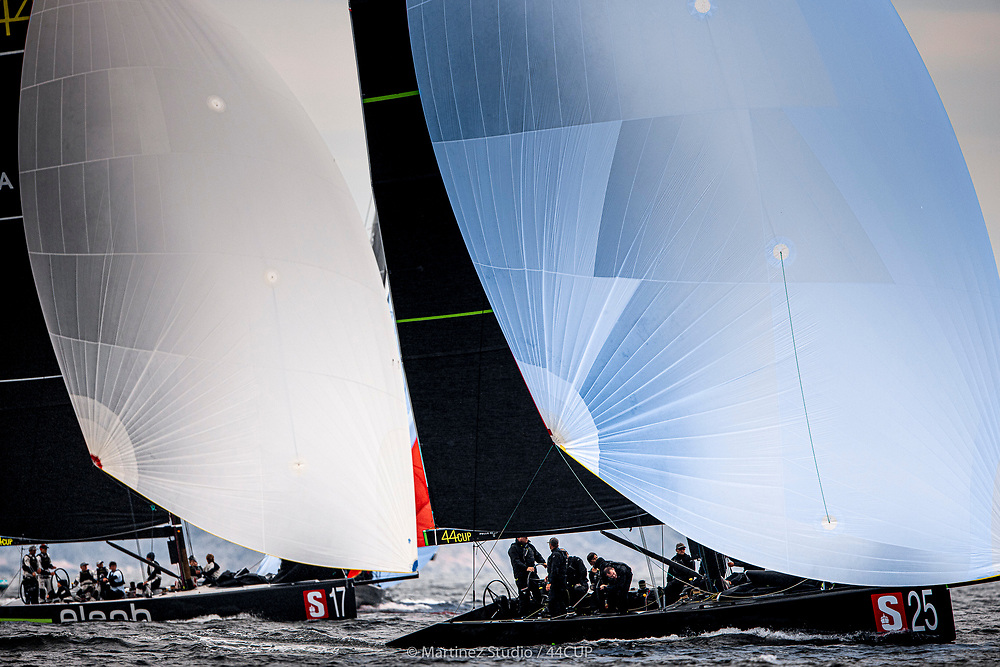 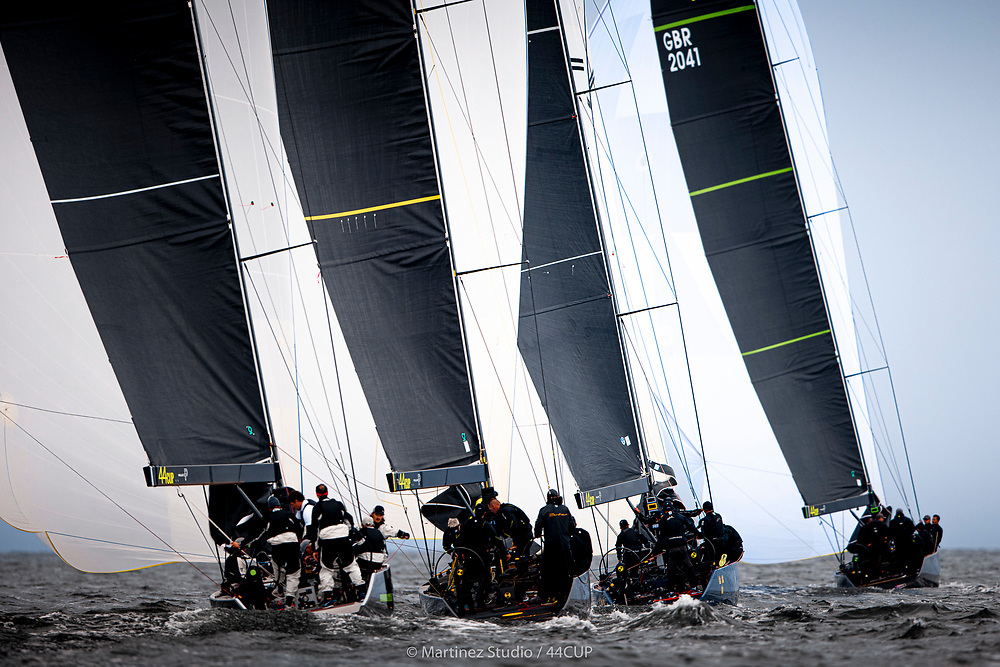 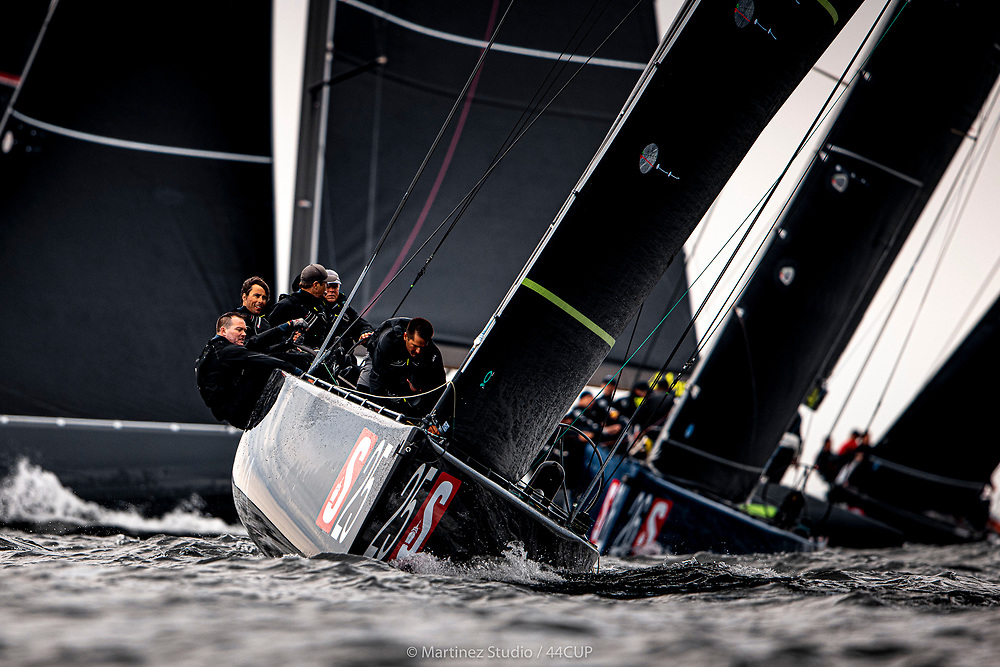 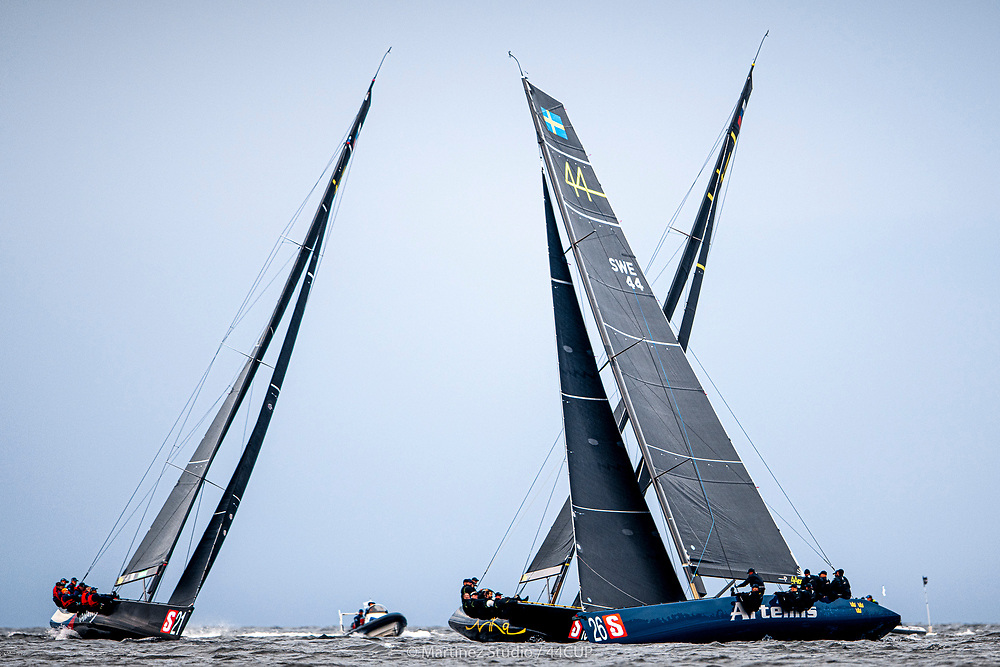 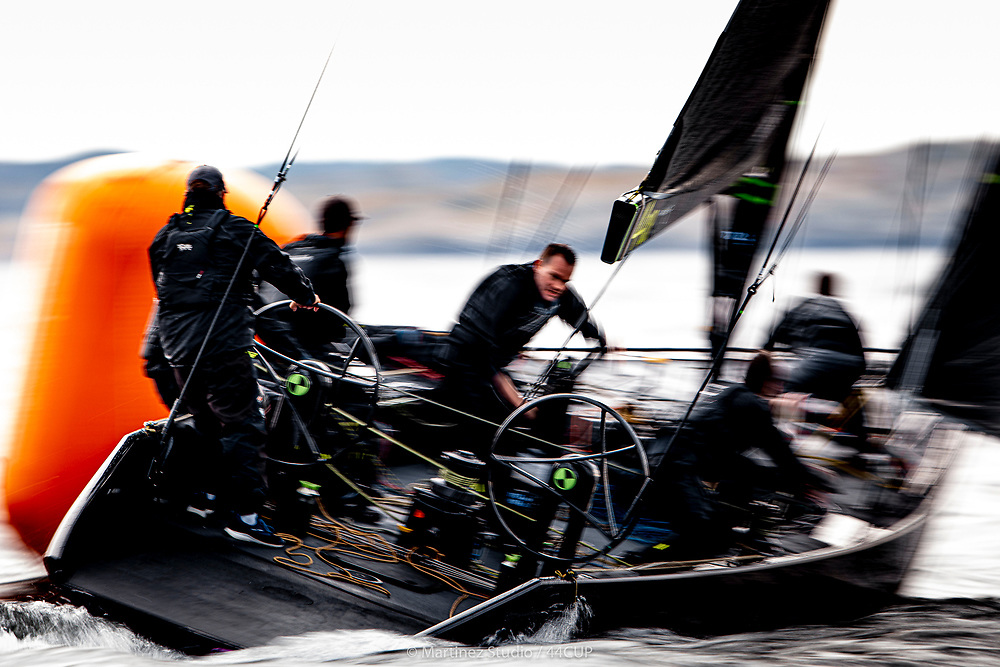 It is rare even between the ultra-close RC44s for an event to go to the wire in such an extreme way as it did at the conclusion of the 44Cup Marstrand. Going into the tenth and final race of the circuit’s Swedish stopover, five of the eight strong fleet was still capable of winning the event. At this point Dutchman Nico Poons’ Charisma was leading by a useful, but by no means unassailable, three points over Igor Lah’s Team CEEREF in second.

Up the first beat of the final race Chris Bake’s Team Aqua made great gains on the right, to lead comfortably around the top mark from where they extended.

Team Aqua had started this race in third place overall, five points behind Charisma and tied with Marstrand event hosts Torbjörn Törnqvist’s Artemis Racing. Thus after crossing the finish line first there was intense scrutiny of the arrival order behind. If Charisma finished fifth then the 44Cup Marstrand would be hers, but if she was sixth she would tie with Team Aqua, causing Bake’s team to win on countback. Despite a tremendous battle between the leaders, Charisma got stuck in traffic coming into the top mark leaving her in last position, and by the finish had only managed to regain two places. Victory was Team Aqua’s.

“We did the best we could,” said a jubilant Bake. “There were hours of pain and moments of brilliance. It was one of those race courses where if you caught the right shift there were huge, huge advantages. It was between Charisma coming fifth or sixth. You never wish bad on your friends, but at that point we wanted them to come sixth. It is still quite hard to believe frankly…”

On the race course, the rise in tension coincided some moments of aggression, notably at the congested top mark roundings. “We purposefully tried to stay out of trouble,” continued Bake of their tactics. “There was one occasion when everyone was ganging up at the windward mark and we were able to sail around them.”

Of their narrow defeat, Charisma’s Nico Poons said: “It is pity we couldn’t finish it and win the regatta, but second is not bad, especially when you consider where we finished last time in Protorož. It gives us some hope for the rest of the season.”

This year’s 44Cup Marstrand was the ninth occasion the series for the high performance owner-driver one designs has visited Sweden. Of these Team Aqua has previously come out on top on four occasions and is the defending champion here having won in 2019. Their win, while Team CEEREF finished fourth, means that Team Aqua also takes the lead in the 2021 44Cup and is permitted the honour of fitting the leader’s ‘golden wheels’ to their yacht.

At the close of play just six points separated the top five RC44s. Artemis Racing claimed third overall, the third occasion the Swedish former America’s Cup challengers have finished on the podium at their event. In what proved to be a high scoring day, when the odds were on that there would be no racing due to the light conditions, the race officials led by 44Cup PRO Maria Torrijo found an area of water where three races were held – testament too to the RC44’s ability to race well in as little as six knots of wind. In the light 6-8 knot southerly, with considerable current pushing the nimble racing yachts around the course, Törnqvist’s team was joint ‘top scoring’ yacht of the day with Team CEEREF, both scoring nine points.

“We came very close to winning the whole regatta,” said Törnqvist. “We had a lot of work to do after Portorož, so I’m happy with where we are now, compared to where we were. In the first races we had some bad starts, but today everything worked. When we are fast over the starting line, we often get good results because out on open water we are fast. But the best thing is to be here, in this fantastic place.” Törnqvist confirmed that the 44Cup will return to Marstrand in 2022.

In a classic 44Cup change of fortune, today it was the turn of Hugues Lepic’s Aleph Racing to take a tumble. At the beginning of the day the French team had been tied on points at the top of the leaderboard. Ultimately they finished fifth.

Pavel Kuznetsov’s Atom Tavatuy achieved the third best score today but this wasn’t enough to redeem them from Saturday’s unfortunate results and they ended up sixth overall. The 44Cup’s other Russian team, Vladimir Prosikhin’s Team Nika had enjoyed promising moments throughout the week but otherwise lacked consistency to finish with a result they will ‘put down to experience’.

Demonstrating that any team is capable of winning at present on the 44Cup, John Bassadone’s Peninsula Racing claimed today’s first race, but this was not enough to prise them up from the bottom of the leaderboard.

“It felt good for a short period of time!” said Bassadone. “It shows that we can do it – we started well with our timing. We just haven’t been doing too well [otherwise]. It’s a little bit of boat speed and few things that we haven’t done right, so it was good to get one under the belt. We will lick our wounds and come back swinging.”