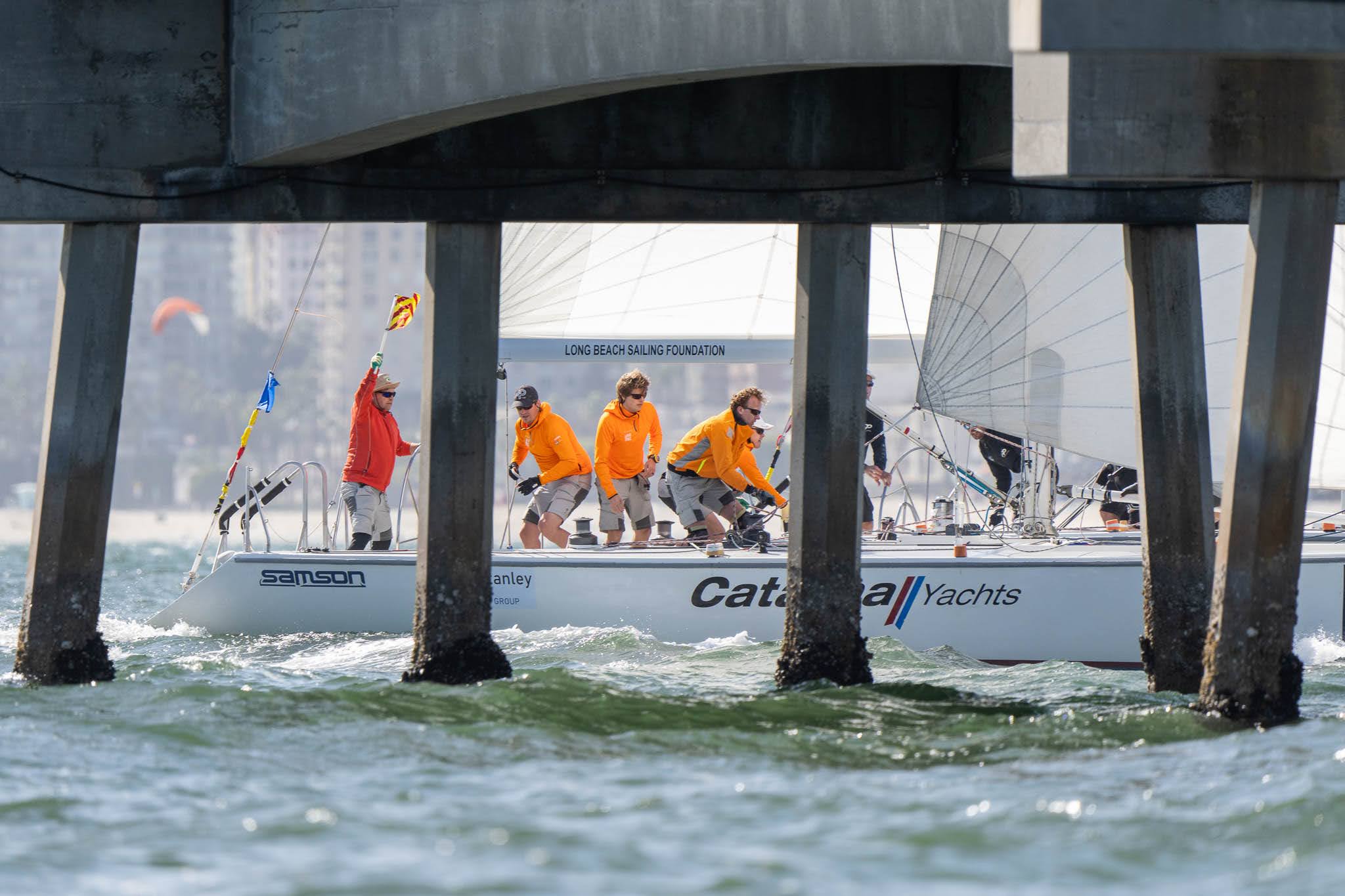 Day two of the Congressional Cup.

Long Beach, California: Taylor Canfield, and his Stars+Stripes Team USA crew finished day two of the 57th Congressional Cup ahead of the leaderboard with 10 points in the qualifying round of the regatta.

Under the command of Principal Race Officer John Busch, racers completed today the first round robin series and dipped into the second. Long Beach continued to deliver stiff and steady westerly breezes: with more forecast for the days ahead.

In today’s races Pearson Potts, USA won his first match of the event and picked up from there; Harry Price, AUS (Down Under Racing) also got up to speed. At the end of 12 flights, defending champion Taylor Canfield had continued ahead to the top of the leaderboard at 10 – 2, but not without a pack of hungry rivals on his caboose: Ian Williams (GBR), Johnie Berntsson (SWE) and Chris Poole (USA) all at 8 – 4.

And it was a day of thumps and thrills as the ten teams warmed up, and the action heated up. Chief Umpire Russell Green noted 21 penalty flags in today’s six flights, with combative competitors colliding, clipping the Race Committee boat, tangling with each other – and the pin end of the line.

“I was feeling more confident, but had three penalties in the first three race,” Chris Poole (USA) remarked. “The old Chris Poole was starting to return” After some ‘self-reflection’ he reeled in the aggression to win the latter three races of the day.  As Nick Egnot-Johnson (NZL) added, “there were plenty of flags flying, boats colliding, and a real spectacle. It was high caliber competition for sure.”

Today they found firmer footing, in the middle of the pack. Borch (24) is the 2022 Ficker Cup winner and Kjaer (20) won in 2021. Victory in the Ficker Cup is not only a launchpad into Congressional Cup racing, it’s a portent: although not necessarily immediate gratification.

Racing continues through Saturday April 23 off the Belmont Veterans Memorial Pier, with shaded stadium seating and live commentary, starting at 11:30am daily. In addition, Thursday will see a fleet race from the Congressional Cup Stadium course into Alamitos Bay; Friday features the Junior Congressional Cup, after the day’s match racing; and during Saturday’s finals, there will be a fleet race for the six eliminated teams.

The Congressional Cup regatta is one of the pre-eminent match racing events in sailing, attracting the top-ranked skippers from around the globe and part of the World Match Racing Tour. Founded by Long Beach Yacht Club in 1965, they pioneered the concept of on-the-water umpiring and set the standard for top-level match racing worldwide. This five-day event continues through Saturday April 23.

For more information on the World Match Racing Tour, visit go to www.wmrt.com