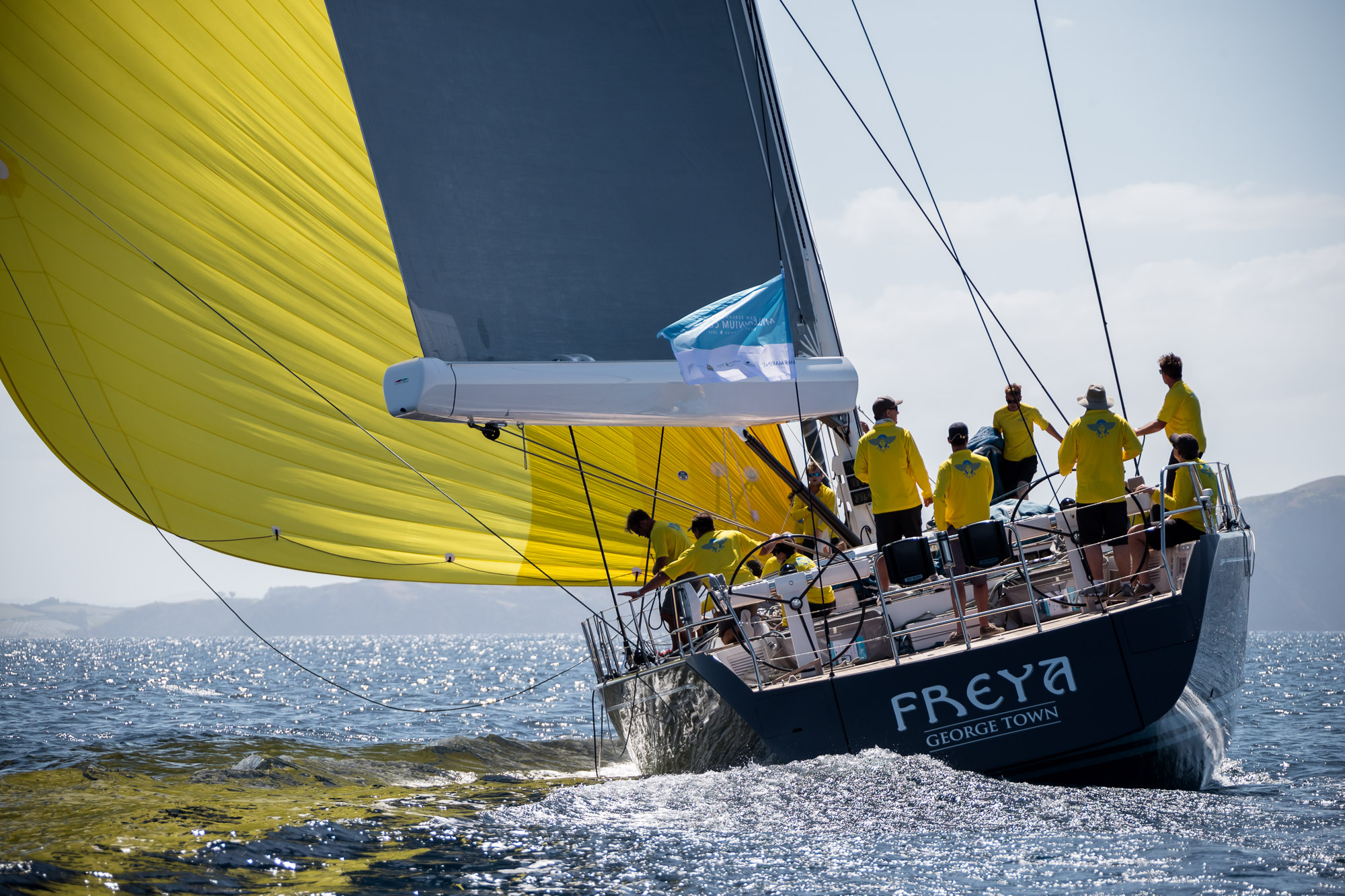 Racing continues on day two at the NZ Millennium Cup regatta with challenging conditions, a time penalty and then victory for one vessel in an unexpected arena.

On a day that started with light air and ended with a battle for a rum barrel, the second day of the NZ Millennium Cup was a perfect example of varied New Zealand racing.

After a delayed start while the fleet waited for the breeze to build, the signals were raised and Tawera was first off t- heading straight across the bay for Tapeka Point before taking a starboard line as she left the mouth of the bay .

As Thalia followed her tack, the light air took a toll and the big 48-metre ketch was slow but steady as she worked to pick up pace, pointing higher than Tawera.

In contrast, Freya behind her looked limber and quickly gained ground as they moved further out into the Bay of Islands. Silvertip was scheduled last to start and made her own path, turning to starboard immediately off the line contrary to the rest of the fleet.

At the head of the pack, Freya emerged in the lead as she tacked followed by Tawera – likewise Silvertip had overhauled the big ketch, Thalia, as they left the mouth of the bay

A soft patch on the stretch to the Orams Marine Mark promised a challenge and the lack of breeze paid a toll on Thalia and Tawera; both had fallen to the back of the pack, while the two sloops were in front but likewise affected by lack of wind.

Freya made a smooth tack leading into the mark, skillfully avoiding a fisherman’s longline for a perfect rounding before she was off toward the Nine Pin. Then it was Silvertip. Cool, calm and collected, she performed a beautiful tack right on the mark.

The wind was strengthening and sped the fleet on its way to the Nine Pin and then home. On corrected time it was Tawera in first place, followed by Freya, Thalia – with a time penalty of five minutes four seconds for crossing the start line early – and then Silvertip.

The second race of the day got underway soon afterwards and the short course and strengthening conditions were enough to see a change on the scoresheet. It was Freya around the Orams Marine Mark first again – making the team on board the Riviera mark nervous as she headed straight for them before a perfect rounding and hoist.

Silvertip took the same line while just behind her Tawera executed a similarly tidy hoist.

It was Tawera and Freya again in first and second place as the second race of the day drew to a close, but this time Silvertip held on to a comfortable third place.

But it wasn’t the last competition of the day. The Tawera Rum Barrel Challenge was back for its second year running. Tawera’s owners, Mike and Tracey Mahoney brought six skiffs with them to the regatta and challenged the crew of their competitors to a rowing skiff race off Russell’s village beach.

The competition was simple but the execution was not. Four rowers and a coxswain were to race the skiffs up to a buoy, round it, and race back to the beach. The fastest would be awarded the 20 litre Tawera keg of Mount Gay Rum.

There were dropped oars, dropped rowers, ungainly dismounts and exceptional turns of speed though in the final heat it was Thalia which shone. Ultimately claiming the prize, the winning crew in red were happy to share some of their bounty with their less lucky competitors.

“There’s no better place in the world to sail,” said 2018 New Zealand Millennium Cup winner Marcus Blackmore, owner of Ammonite as he accepted his prize in January last year.

The New Zealand Millennium Cup attracts yachts with a penchant for adventure and is lauded by entries for the sense of camaraderie found in this part of the world – part of the draw for yachts already lining up to be involved in years to come.

“The J Class Association has also accepted our invitation to race in 2021 and we know having the strikingly-elegant classic yachts race alongside the NZ Millennium Cup will add an extra dimension to our racing.”