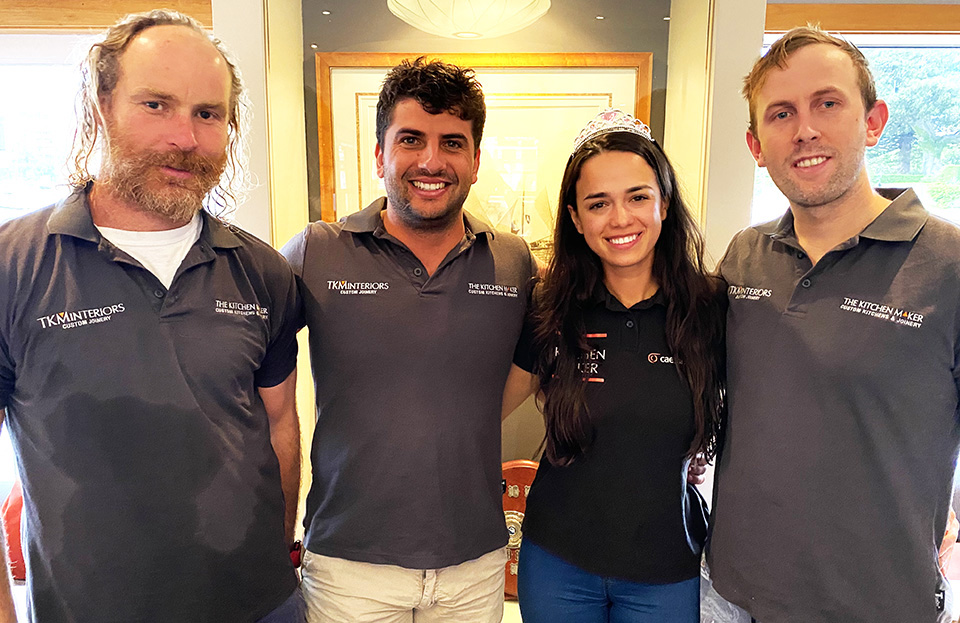 In a thrilling finish, Tatiana Cardoso became the 18ft Skiff Queen of the Harbour when The Kitchen Maker-Caesarstone team of Jordan Girdis,  Lachlan Doyle and Cameron McDonald came back strongly over the final lap of the course to take out the annual event on Sydney Harbour today. The Kitchen Maker-Caesarstone took line honours by just 11secs from Sophie O’Loughlin, Simon Nearn, Ed Powys and Brandon Buyink on appliancesonline.com.au, with Yandoo (Ombeline Even, John Winning, Fang Warren and Mike Kennedy) only 6secs further back in third place. Noakes Blue (Sandra Garlie, Yvette Heritage) finished in fourth place ahead of Finport Finance (Elizabeth Dallen, Keagan York), and Shaw and Partners Financial Services (Sally Colley, Jim Colley) in sixth place. It was also a great victory for the long-term sponsor, The Kitchen Maker, which has now registered three victories in the last four Queen of the Harbour races. India Howard won in 2017and Isabelle Quigley in 2019 as well as Tatiana’s victory today. Despite a number of sporting events being cancelled due to the bad weather over Sydney, the Australian 18 Footers League’s fleet contested the annual race in a 16-24 knots North East wind. With teams adding a female competitor to the regular three-man crew, the two lap event over a windward-and-return course, produced a close race on the first windward beat from the start off Clark Island to the top marks off Nielsen Park. Yandoo led the fleet from appliancesonline at the Nielsen Park top mark on the first lap, followed by The Kitchen Maker-Caesarstone, Shaw and Partners, Finport Finance and Yandoo Winning Group. After a spectacular spinnaker run back to the bottom mark off Clark Island, Yandoo held a 30s lead over appliancesonline, The Kitchen Maker-Caesarstone and Finport Finance. The breeze increased over the second lap of the course and it was The Kitchen Maker-Caesarstone which took full advantage of the conditions and the red marker rounding at Nielsen Park to grab the lead as the fleet headed for home. Yandoo’s team elected to sail a course on the RHS of the harbour while The Kitchen Maker-Caesarstone and appliancesonline staged a great battle down the LHS. When the two groups crossed, Yandoo ‘split’ the other two when she crossed behind The Kitchen Maker, but had to put in a final gybe to cross the finish line which allowed appliancesonline to regain second place. It was a spectacular finish to a great effort by the League to stage such an exciting race in very trying conditions – Frank Quealey, Australian 18 Footers League