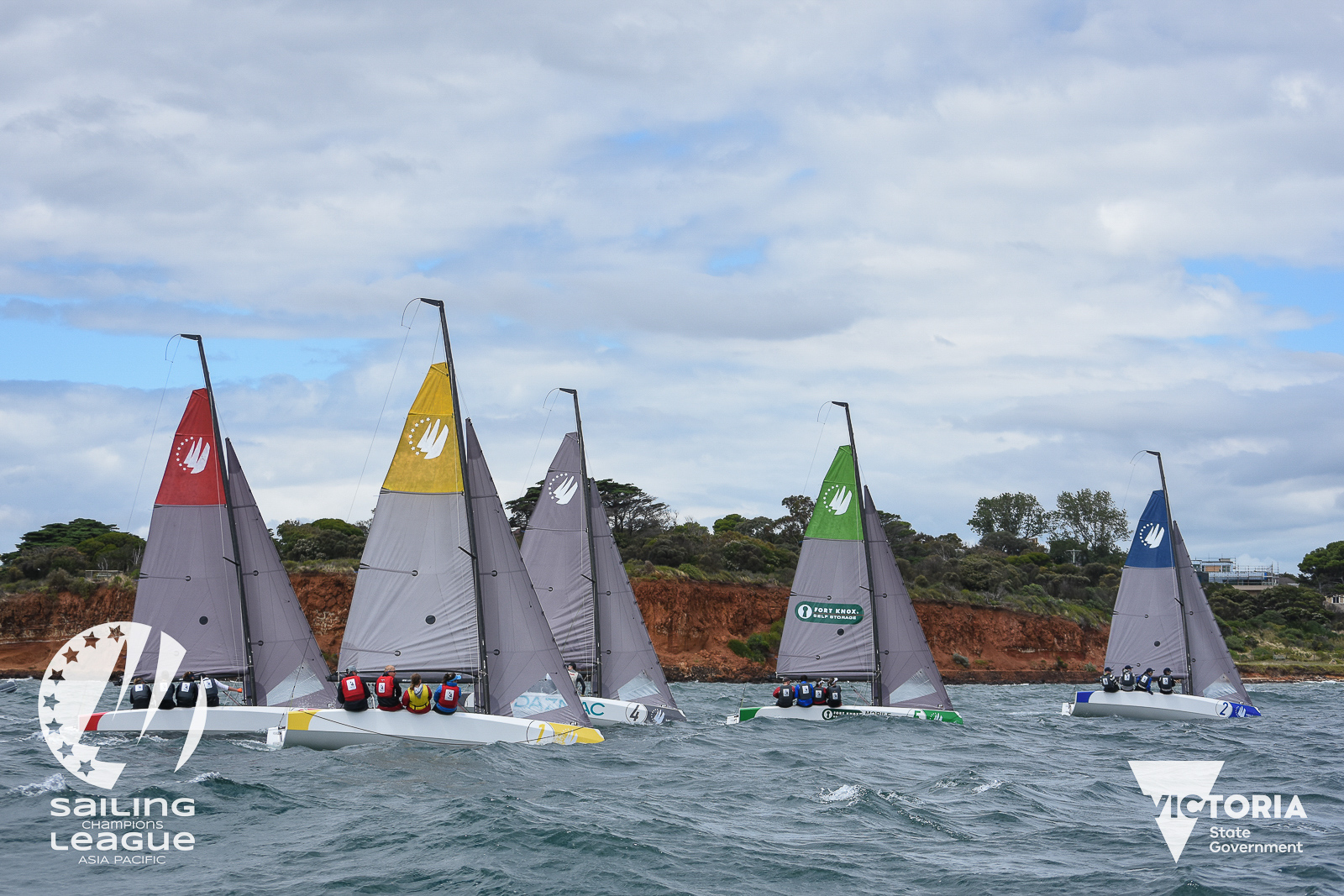 The Royal Yacht Club of Tasmania (RYCT) has emerged victorious at the first event of the 2021 Sailing Champions League – Asia Pacific season with an exciting win in the SCL – AP: Southern Qualifier hosted by the Mornington Yacht Club at the weekend.

Helmed by Sam King with crew Chloe Fisher, Alice Buchanan and Charlie Zeeman, the RYCT team sailed consistently all weekend, however saved their best until last to prevail in the six-team finals series against some tough competition.

It was the second year in a row an RYCT team has taken out the Southern Qualifier with Oliver Burnell successful in Geelong last January.

“Full credit to the team, I really owe it to them, they made me look good,” said an elated King after racing concluded on Sunday.

“A massive thanks to everyone who helped us, mainly the Royal Yacht Club of Tasmania … and to all the organisers at this club (MYC) and to Mark Turnbull for getting this kind of thing running.

“It’s just a really great event and we’re stoked to have Tassie take it out twice.”

The finals series was set up so the first two races would see the last boat to finish being eliminated – and from then it was the first of the final four boats to register two race wins that would take out the event.

The RYCT win wasn’t without its challenges though with the Sandringham Yacht Club team led by James Sly finishing in second place and quite nearly taking the win off the Tasmanians in the finals, having also won a race.

In third place was Harrison Sly and his team, also representing Sandringham, while Laura Harding and her Blairgowrie Yacht Squadron team finished in fourth.

Hometown hopeful Chris Jackson and his Mornington Yacht Club team qualified as the top seed going into the finals, but unfortunately were eliminated just before going to the final four, which would see them finish in fifth place.

Sandringham youngster Matty Goss and his team also had a great regatta to qualify as the sixth team in the finals, however, weren’t able to hold on and were eliminated in the first finals race.

The top four teams of the event have now qualified for the SCL Asia Pacific Final, which will be held in Sydney in April, while the next event is the Northern Qualifier for QLD, NSW, ACT and NT clubs, which will be hosted by the Newcastle Cruising Yacht Club on March 20-21.

For photos and video go to: www.facebook.com/SCLAsiaPacific

The event was proudly supported by the Victorian State Government – visit: www.sport.vic.gov.au