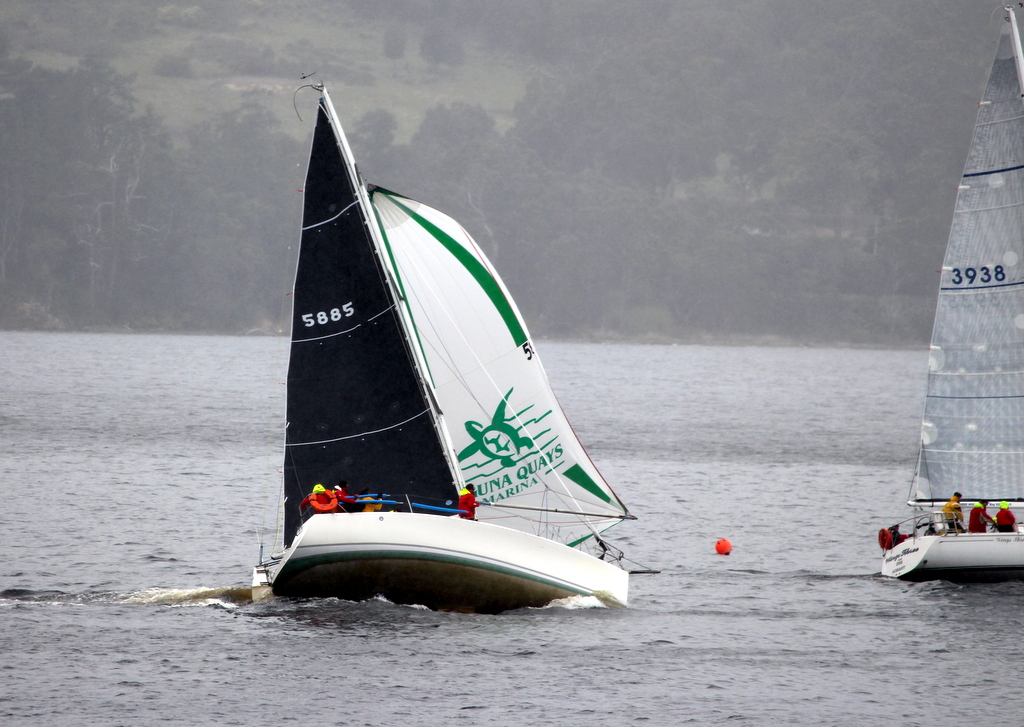 A sharp south-westerly gust caught this crew unprepared in the Cock of the Huon race. Photo Peter Watson.

Hobart’s Combined Clubs have included the Friday night passage race as part of this summer’s Offshore Trophy, making it a four-race event over the summer season.

All of the Offshore Trophy races will be overnight events, three before the major Christmas ocean races. In addition to the Pipe Opener, they include the Isle of Caves and Maria Island races. The fourth will be the Bruny Island Race in February.

With the DSS/Ronald Young & Co Pipe Opener night race from Hobart down the River Derwent and the D’Entrecasteaux Channel, extended to Garden Island near the mouth of the Huon River, the Friday night race drew 35 starters, the largest fleet in a decade or more.

Among the fleet in the night race were Melbourne to Hobart West Coaster entrants Oskana and Whistler, Sydney Hobart entrant Black Sheep and many of the expected starters in this year’s Launceston to Hobart.

As expected, the Cookson 50 Oskana led the fleet home on Friday night in 4 hours 39 minutes after a fast (at times) spinnaker reach down the Derwent and the Channel.

Not all the night race entrants stayed on for the HYC/Huon Aquaculture-sponsored Cock of the Huon on Saturday afternoon, sailed off historic Shipwrights Point Regatta Grounds on the Huon River.

Barcoo won Division 3 and, with the lowest PHS corrected time of the 22 starters, Barcoo was declared 2018 Cock of the Huon.

Barcoo placed fourth in Division 3 of Friday night’s passage down the Derwent and the Channel in winds that ranged from 0 to 31 knots.

On Saturday, the Jarkan 46 outsailed the division opposition, including several other cruising style boats, with a corrected time of 1 hour 23 minutes and 56 seconds in the 10-12 knot SW breeze with some heavier gusts.