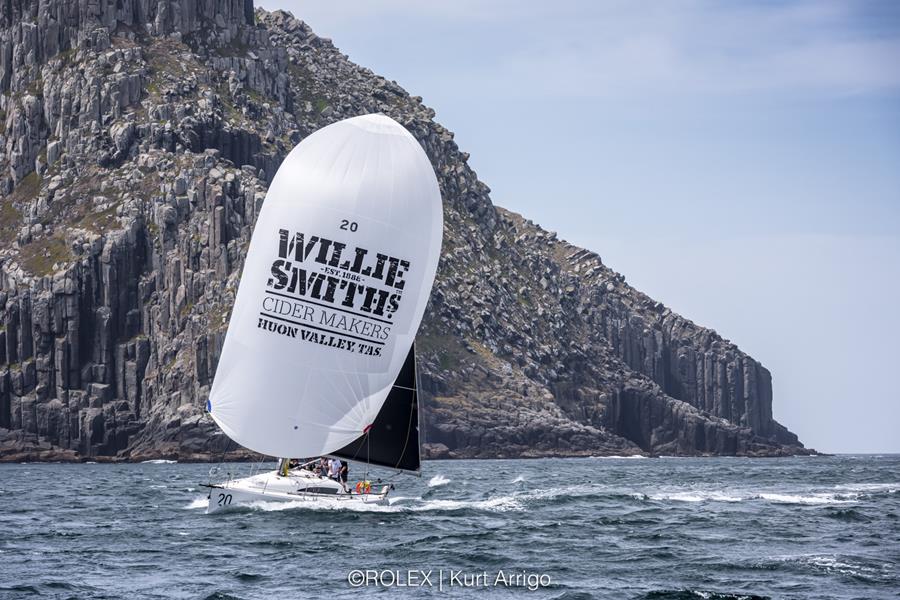 When the cannon fires 1300hrs Boxing Day, signalling the start of the 2020 Rolex Sydney Hobart Yacht Race, a strong deputation of six Tasmanian entries inclusive of two previous overall winners will have their sights set on winning a trophy or two; the Tattersall Cup, a division win, or victory in the new Two-Handed Division.

Shaun Tiedemann, (Philosopher), Greg Prescott (2 Unlimited), Phil Turner (Alive) and Ed Psaltis (Midnight Rambler) are in the running to win the race overall and have their name engraved on the Cruising Yacht Club of Australia’s famous Tattersall Cup, awarded to the overall winner each year.

Tiedemann owns a ‘tricked up’ Sydney 36 racer/cruiser which won Division 6 and the new Graeme ‘Frizzle’ Freeman Memorial IRC Corinthian Trophy in last year’s 75th race. “Frizzle was a stalwart of the Derwent Sailing Squadron where I’m the general manager. He was a big name in sailing, so it was special to win that trophy,” Philosopher’s owner remarked.

While he hopes to repeat last year’s performance, Tiedemann has no hesitation in naming his major competition. “2 Unlimited – that’s the Tasmanian boat to beat,” he said of ‘Enzo’ Prescott’s modified Farr 40. “We’ve had great competition with Enzo. We got our boats around the same time and both tricked them up.

“They (2 Unlimited) won their division in the Australian Yachting Championships (held in Hobart in January) and we were third in our division, where we had great competition with Midnight Rambler.

“They always sail Midnight Rambler well. To be able to beat consistently well-sailed boats like them, rather than just sometimes with a bit of luck here and there, tells us we’re doing something right. Ed Psaltis (winner of the 1998 Sydney Hobart) does a lot of club racing and he sails well regularly. We more line up just for offshores, like the Maria Island Race and such.

“Then there’s Alive. They’re always in there,” he says of the 2018 Rolex Sydney Hobart winner which finished sixth across the line to win Division 0 last year.

Using a similar formula to last year, a mix of up and coming young guns blending in with the experienced ‘elders’ aboard, Tiedemann says, “We’ve had extraordinary success with this boat. “Sorro (previous owner Peter Sorensen) had it extremely well set up and we took it further. They’re a good little boat, the Sydney 36s.

“It would be unbelievable to win the race. For that to happen, we need it hard on the nose for a couple of days. Unpleasant, I know, but that’s how we can win. You have to sail your boat well, make the right decisions, and have a bit of luck. Who knows? It’s in the lap of the Gods…“

Meanwhile, Peter Lewis and Neil Everson have paired up for the inaugural Two-Handed Division on Lewis’ Bluewater 450 Charlie’s Dream, a far cry from Lewis’ usual fare of racing in the Cruising Division of the race.

“The boat is very easy to run two-handed,” Lewis explained. “My wife Virginia and I have sailed it around Australia two-handed, although we took on a couple of others from Albany (WA) to Ceduna (SA).”

Lewis is looking forward to doing the 628 nautical mile race two-handed: “Being the inaugural one, we thought ‘let’s do it’. Neil has sailed from Brisbane to New Zealand on a cruise with me and did the Brisbane to Noumea race with me – both two-handed.

“It will be quite different to the cruising mode Neil and the rest of the crew did with me in the 2017 Rolex Sydney Hobart and I’m pleased to see there are a reasonable number of two-handed entries.”

Can they win their Two-Handed Division? “We’ve always raced as hard as we can, but bear in mind, we are a comfortable cruising boat and we always sail safely. The goal is to reach home,” Lewis ended.