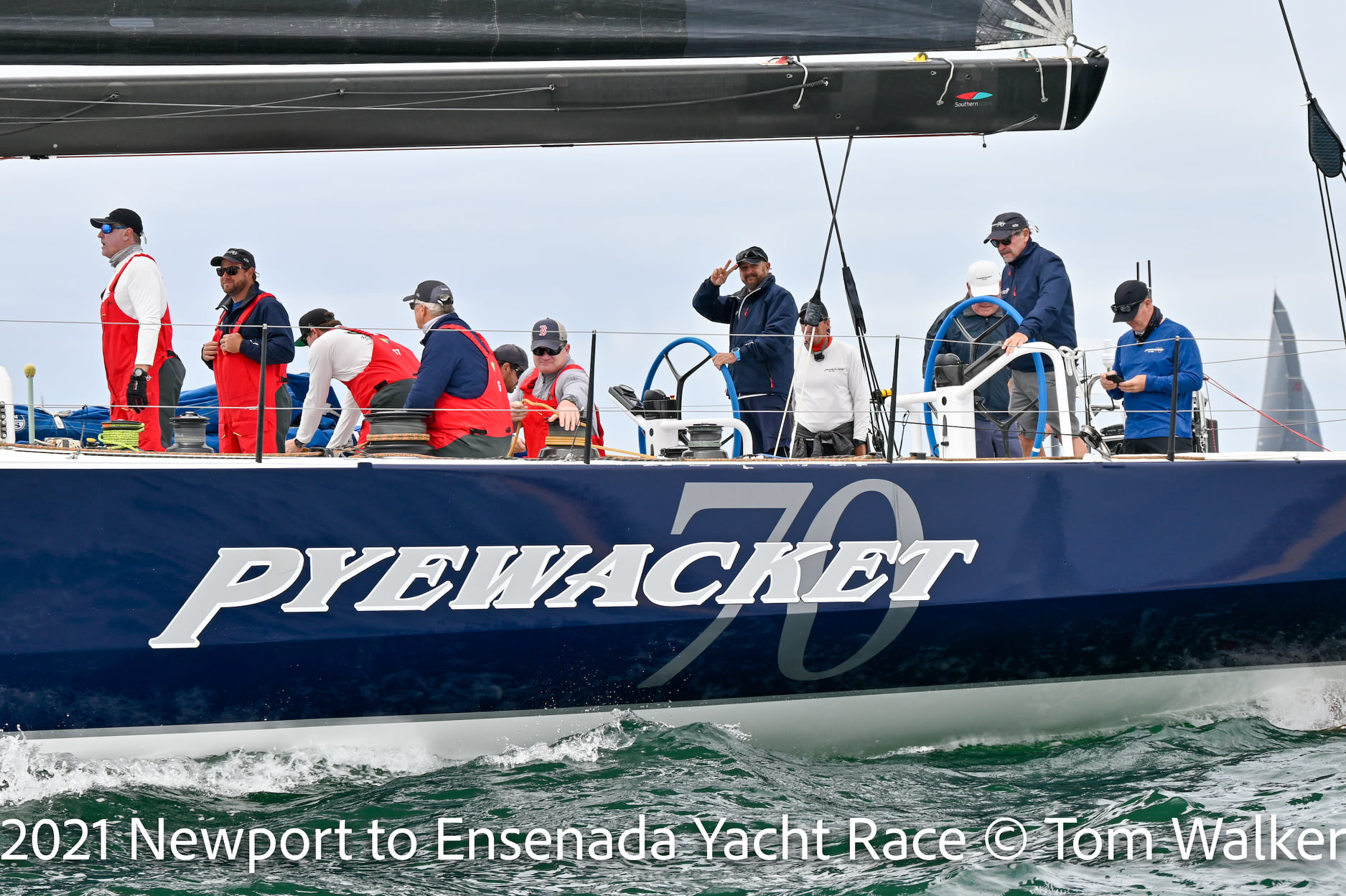 Taniwha and Pyewacket finished the 73rd Newport to Ensenada International Yacht Race with eight trophies between them.

“It was pretty amazing to sail with Pete Melvin, Ferdinand Van West, and Tim McKegney.” said Fiat. “I’m so fortunate to have sailed with such an impressive team of accomplished sailors.”

Melvin won a few of the same trophies in N2E 2014 for his 30-foot multihull Mama Tried. Van West is a naval architect at Morrelli and Melvin and top multihull sailor while McKegney was a helmsman on the ORMA60 Mighty Merloe, another N2E race-winning trimaran.

The win also garnered Alamitos Bay Yacht Club the trophy for the most wins for a club.

One of the dozen or so boats less than 34-feet that sailed the traditional 125 nm course, Taniwha is a New Zealand-built folding trimaran. It got off to windier than expected start and for more than halfway down the coast appeared to be hot on the Volvo 70 Pyewacket’s stern.

But Fiat and navigator Pete Melvin veered offshore when the breeze dropped hoping to catch more wind for a close or beam reach from north of the island into the finish. They didn’t catch Pyewacket, but they make the most of the 12-knot breezes before it shut off about midnight, according to the rest of the fleet. Upon arrival in Ensenada Friday, Fiat and team reported being pleased with the race and their time but just slightly disappointed they didn’t catch up to the Volvo 70.

But Roy Disney’s turbo-charged hot rod Pyewacket and team; a core crew who’ve sailed together for decades plus a couple of professionals for good measure, would not be caught. The technologically advanced boat came within 12 minutes and 13 seconds of breaking the monohull record on a course without record-breaking conditions.

From aboard Friday night, tactician Peter Isler reported having sailed a beautiful race – smooth seas with lots of dolphins and nice 10-12 knot breezes from the west that allowed them to reach a lot longer than expected.

“More than half crew are long-timers, with great camaraderie,” said Isler. The Volvo 70, a box rule class boat from the Volvo Ocean Race series was made for great ocean sailing and has a lot of features the crew is still learning.

“This boat is so different, unique, and powerful, every time we’re aboard we learn more about it; it’s fun,” said Isler. “It’s a completely different machine and there’s not many around. Figuring out how to sail it fast takes a while.” The hours learning the boat will be in preparation for this year’s Transpac; an important race for the Disney’s family.

BYC’s Andy Rose and the It’s OK team returned to the podium to collect the Governor of California trophy for best-corrected Ultra-Light aboard the Andrews 50.

“NOSA really blew it out of the park this year in the worst possible of conditions,” said Rose.” “And the Coral tops it off; the great people, and great rooms.”

Before getting on the boat for the first time in 14 months, Rose jokingly wondered if he still remembered how to sail. But being back with the crew made it easy. “It’s joyous to be back on the boat with this crew,” Rose said, describing the team as being one that laughs a lot. “I’ve sailed with some of the best in the world, and this crew is up there. I’d rather be here than anywhere else.”

Steve Sellinger’s Triumph, a Santa Cruz 52, was another big winner taking home the President Of USA Best Corrected and Jack Bailee Best Corrected – Newport Beach Club trophy. A crew spokesperson credited the navigator for a great job of keeping them in the breeze. The Newport Harbor Yacht Club’s crew of 10 have been racing for five years. A few Zoom calls were part of the preparation this year.

Andy Horning of SLBYC has sailed N2E for 24 years in two different boats. He’s been a class winner 14 times. Make that 15. Day Tripper II, a 1990 Hunter 40, and his regular crew made the best time in PHRF C Class by a wide margin and took home the Converse Wurdemann Trophy. The secret to the boat’s success he said is preparation, teamwork, having a couple of guys who drive well. That and the boat’s ability to thrive in light air conditions. “It’s a great race, everyone shows up,” he said, adding that “N2E is a great opportunity to duke it out boats from other harbors.”

Dan Rossen might as well have his name permanently etched onto the Volvo Best Corrected – Double Handed trophy, winning for yet another year with Problem Child, a B32 with partner Richard Whitely. Despite having a few additional teams competing for the double-handed honors this year, the BCYC team has now won nine times in a row.

Double-handed sailing is the epitome of teamwork. Some double-handed teams stayed awake the entire race, making three-person sail changes with two people, problem-solving on the go, in boats not made to be operated by just two people.

Dan Rossen and Richard Whitely met in the late 90s and have sailed together double-handed frequently in addition to N2E. “Communication and not over-analyzing every move is the key,” Rossen said about their success. “Like in any sport, it’s all in the preparation, said Whitely. “Sometimes the race is won before you hit the start line.”

It was seven months ago when the Newport Ocean Sailing Association’s board decided to plan for the best and commit in trying times to host the historical full fleet sail to Ensenada and prepare alternative routes, parties, and celebrations to ensure that the race, the fun, the camaraderie N2E is famous for, would go on.