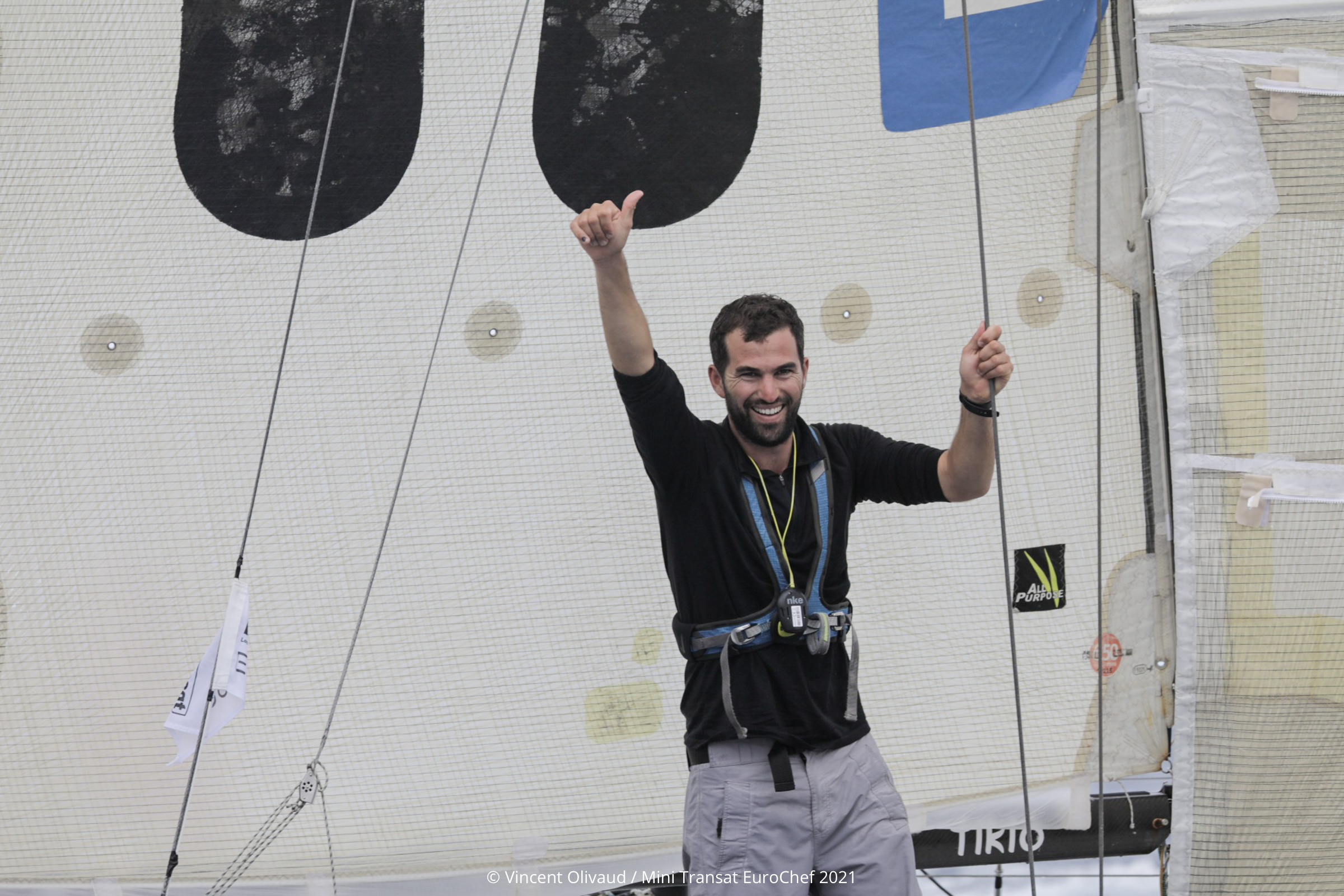 On Monday at 3pm UTC, Tanguy Bouroullec was the first skipper across the finish line in the first leg of the 23rd Mini Transat EuroChef taking competitors from Les Sables d’Olonne to Santa Cruz de La Palma.

Bouroullec is now sitting in first place overall in the prototype category.

The skipper of Tollec MP/Pogo took the win after a hectic race, during which the four leaders managed to steal a march on the rest of the fleet while exiting the Bay of Biscay.

Bouroullec was interviewed following his win.

How do you feel after taking the win in this first leg?

When you finish a leg of the Mini Transat, you don’t really know what’s gone on out at sea. On land, you always know a lot more than us! For my part, it was clearly a surprise to see Fabio (Muzzolini) appear on the AIS this morning. I even thought that my system was acting up because the day before I had a 40-mile lead over him.

We chatted a bit over VHF. I learned that he’d been accelerating the whole of last night thanks to a better closing angle than me. I was afraid that Pierre Le Roy was with him, but on crossing the finish line I learned that I was first so that’s cool.

It’s your second podium in a leg of the Mini Transat . You came third in a leg in the 2019 race. But this is your first victory. How do you feel about fulfilling this goal of yours?

Yes. I’m very happy, especially given that it’s been a fairly complicated one. Four of us managed to slip away at Cape Finisterre. I knew that the vast majority of the fleet had sought shelter due to the weather conditions. It was a strange feeling to learn that type of news. I got out my charts to see where some of them had stopped off.

It’s certainly been a complicated leg in terms of the weather. I’m looking forward to seeing the cartography to get a grasp of everything that’s happened. I’ve no idea where Fabio came from! We’ve had some complex conditions with twin ridges of high pressure, a front in the middle… it was hard to know where we were at in relation to all that.

You seemed pretty fresh at the finish…

Pretty fresh? No, that’s because there was a squall just before the finish, which woke me up! I’m doing alright though, to be fair. The boat’s doing well. I haven’t broken anything. She’s in perfect shape, ready for the second leg. As I’ve already said, this first act was complicated in terms of the weather, but there were still some enjoyable moments, especially during the last few days.

Just before Madeira, we had fairly flat seas. We were just screaming across the water, slipping along up on the foils. Those were fun times and the foils have done well as it has been a bit of a lively leg. Exiting the Bay of Biscay was particularly full-on.

Yes, the exit from Biscay played a key part in your race win.

It sure was! It was complicated! In the small front during the second night out, I had to contend with gusts of 36 knots! In a Mini, that much wind, close-hauled, is not much fun. After that I fluffed it a bit in the ridge of high pressure. Exiting Biscay really wasn’t that easy. We knew it’d be a decisive passage, but we didn’t expect the door to slam shut like that just behind us. We were lucky there. It’s fair to say that for the overall ranking in the prototype category, it’s created a hole.

The battle for the podium remains very tight.

It promises to be a fantastic second leg! The match is still open. One hour on a transatlantic scale is nothing and Irina (Gracheva) is not very far behind either!