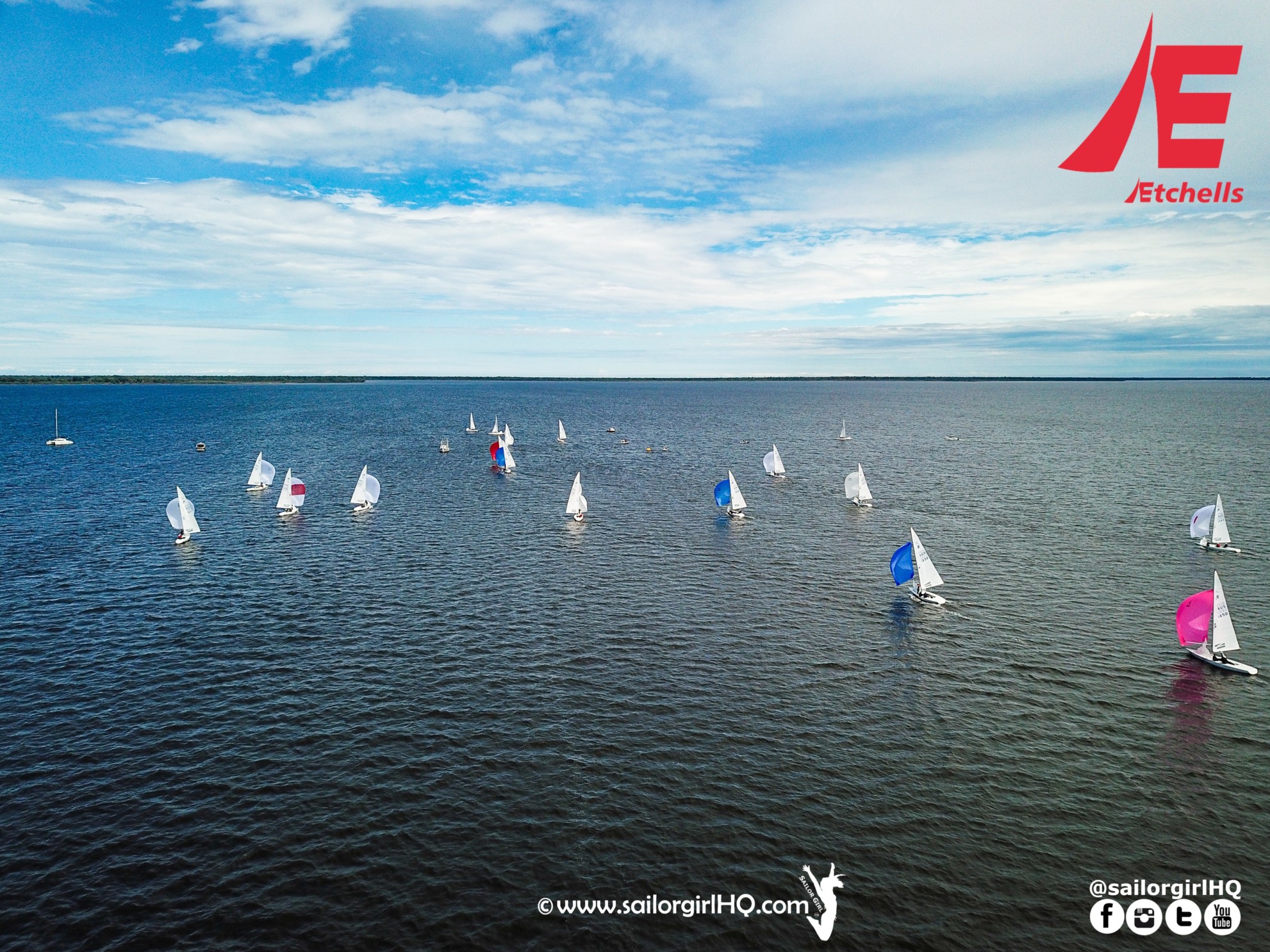 “This is a great venue, it’s our favourite sailing destination anywhere in the world” he continued to big cheers from the crowd.

“We love the people, we love the enthusiasm, and we have a great admiration for what you are doing here with the Etchells class, it’s a great example for all of us”.

“It’s pretty special to win this Australian Championship, but as you all know, skippers are only as good as their crew, and I’m fortunate to have these two guys here [Cam Miles and Sam Haines]. It was our third event together, we have come together marvellously, the boat is very relaxed, the communication is good, and we just get out there and have fun”.

Racing was cut short due to the adverse weather conditions today at the Gippsland Lakes.

“Unfortunately the weather set in” said Ross Wilson the Race Officer. “We always thought that today was going to be a difficult day,” he continued, noting that there had already been eight races sailed out of a potential nine.

“We have some wind limits for Etchells sailing, which is around 24 knots, on the Lake probably 25 knots, but we have wind speeds well over that at the minute. The forecast is for up to 40 knots later on this morning, or early afternoon”.

“With respect to the whole Etchells fleet, we held them at the [Metung] Yacht Club until 11 o’clock, to be absolutely sure that the wind wasn’t going to abate. It only got stronger, as the weather forecast predicted, so we then put AP over A up [flags] and abandoned sailing for the day”.

The third day of the Etchells Australian Championship was sailed from the Metung Yacht Club yesterday, 5 March 2022. The day saw races seven and eight completed after a long postponement while competitors and organisers waited for the breeze to settle.

The first attempt of Race 7 was set at 245 degrees at around ten knots on a very different race track to the prior two days.

The breeze started to spin to the right due to the raining clouds during the sequence, and the start was given a general recall when someone triggered and pulled the whole fleet over with 30 seconds to go.

The race committee started setting up for a restart at an axis of 255, but the breeze continued to swing right, so they upped anchor to reset the course.

The second attempt to start race seven was eventually set at 340 in building pressure. The fleet were anxious to get underway, which saw a large portion of the fleet over the line once again, and the race committee issued another general recall.

The third attempt to start Race 7 was shifted to a course axis of 330, and four boats were called over early under a U Flag, including the Metung Yacht Club Commodore and his crew on War of the Roses AUS1360, Feng Shui AUS784, White Noise AUS1127 and Apres la Mer AUS923.

Peter McNeill’s Lucy AUS1082 with Andrew Smith and George Johnstone were early leaders midway up the first work and were not headed for the duration of the race. The Archer skippered by Jack Abbott, Hamish McKendrick, Jack Felsenthal and Tom Trotman who won the Youth Division were second for most of the race.

These minor podium placings were swapped by the finish for Ireland Girl’s best result of the regatta.

Hill’s Lisa Rose AUS1449 and Hampton’s Tango AUS1466 on the other hand, both had their worst scores, finishing right next to one another in 10th and 11th respectively. After seven races, this left Lisa Rose AUS1449 in the lead overall by four points as both boats picked up their previously worst score, a 3 for Hill, and an 8 for Hampton.

In Race 8, Tango AUS1466 started close to the pin, Lisa Rose AUS1449 near the boat. At the top mark, Hampton had taken control of the race, with Lisa Rose back in the pack.

With the forecast for today always making racing on the final day unlikely, Lisa Rose had no choice but to take risks for the remainder of the race, but it wasn’t enough to close the gap to Tango. The top five in the final race were Tango AUS1466, Triad AUS1383, Lucy AUS1082, Ireland Girl AUS1325, and Thelastone AUS1392.

This regatta would not be possible without a fantastic group of sponsors, led by major sponsor King & Heath First National Real Estate, as well as the brilliant team of volunteers working out of the Metung Yacht Club, including the Race Management team, headed by Ross Wilson, backed up by Kevin Wilson.

The media sponsor for this event, and a number of other Etchells Australia events this year is a major supporter of the class, HillPDA. Thanks to our other photographers who are onsite for the event, McPherson Photography and Lenka Senkyrikova.

Also in Metung this weekend are the new Mark Set Bot buoys. This ground-breaking technology is being showcased as a sustainable and more efficient method for laying sailing marks. No anchors are required as the electrically motorised inflatable marks are plotted to a GPS coordinate.