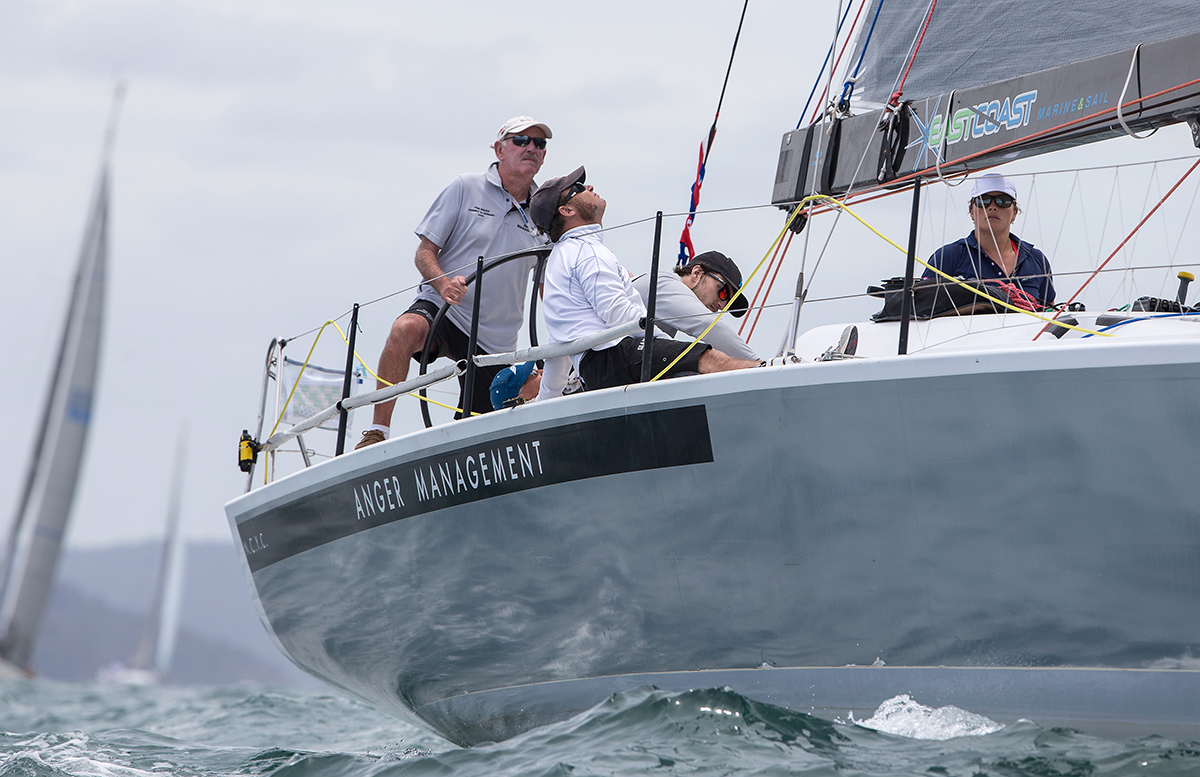 Anger Management at the start of the Pittwater to Coffs race 2016. Photo credit Crosbie Lorimer.

Like the Rolex Sydney Hobart fleet’s quick push south in record time, the Club Marine Pittwater to Southport line-up is set to also enjoy tailwinds after taking a left hand turn out of Broken Bay tomorrow.

The Royal Prince Alfred Yacht Club will set a start line to the north of Palm Beach headland at 1pm on Monday January 2, 2017 and send the fleet to cover a course length of 370 nautical miles to the Queensland Gold Coast and Southport Yacht Club, which will welcome and host close to 200 sailors.

Bureau of Meteorology weather services manager Jane Golding says a front is expected to run up the NSW coast passing Sydney later afternoon or evening on Sunday January 1, 2017, followed by a spell of SE winds that will hit the NSW coastline.

A high pressure system is likely to follow the front and at the same time a tropical monsoon trough and low pressure will be on the central QLD coast. Between these two weather systems the SE wind will be stronger on the northern NSW coast.

Respected yachting meteorologist  Roger Badham is supporting the Bureau in terms of supplying specialised race forecasts and he’s predicting a fast race with S-SE winds of 20-25kts easing to 10-15kts on the Hunter and Mid North Coast and likely to remain SE 20-25kts at the NSW-QLD border areas.

This is great news for the lightweight, wide and the planing boats that love running-reaching conditions, and not so great for the narrower and heavier hulls that sail closer to their handicap rating when pushing into headwinds.

Skipper of the Elliott 10.5 High Anxiety, Marcus Grimes, said, “We would be ecstatic if ‘Clouds’ Badham's forecast holds and the more east in the southerly the better, to help us against the symmetrical boats. Our sweet spot is broad reaching.

“Our early routing is telling us it will be a fast run under three days, but we will wait and see what the SE current has in store for us!” Grimes added.

He and his RPAYC team are also excited about new trimmer Danielle’s pre-race preparations – baking her own sourdough bread and smoking cheese to share with the crew.

Golding expects by the time the fleet reaches the Coffs Harbour – Byron coast vicinity they can expect heavy showers and possible storms. She says the fleet would have to go too far wide to gain any advantage by avoiding the southerly current running along the race route.

A diverse fleet of NSW and Queensland boats ranging from the smallest, High Anxiety at 33 feet, to the largest, a Radford 50 called Peklejus, are less than 24 hours out from the first ocean race of the New Year. Like always in coastal passage races, the pressure will be on the navigator and tactician to pick the fastest course – running along the beaches and headlands or further out to sea where winds can be fresher, or a combination of both.

Skippers will attend the mandatory race and weather briefing at 0900hrs at the RPAYC on start day and after the start the fleet can be tracked continuously via the race website.

Crews can hone their on board reporting skills during the Club Marine Pittwater to Southport Yacht Race and help feed the social media beast by posting live update photos and videos to Facebook or Instagram. At the January 6 official race prizegiving the winner will be announced and presented with the prize pack of a Go Pro HERO Five, official race merchandise and a waterproof storage bag. T’s & c’s on the race website.