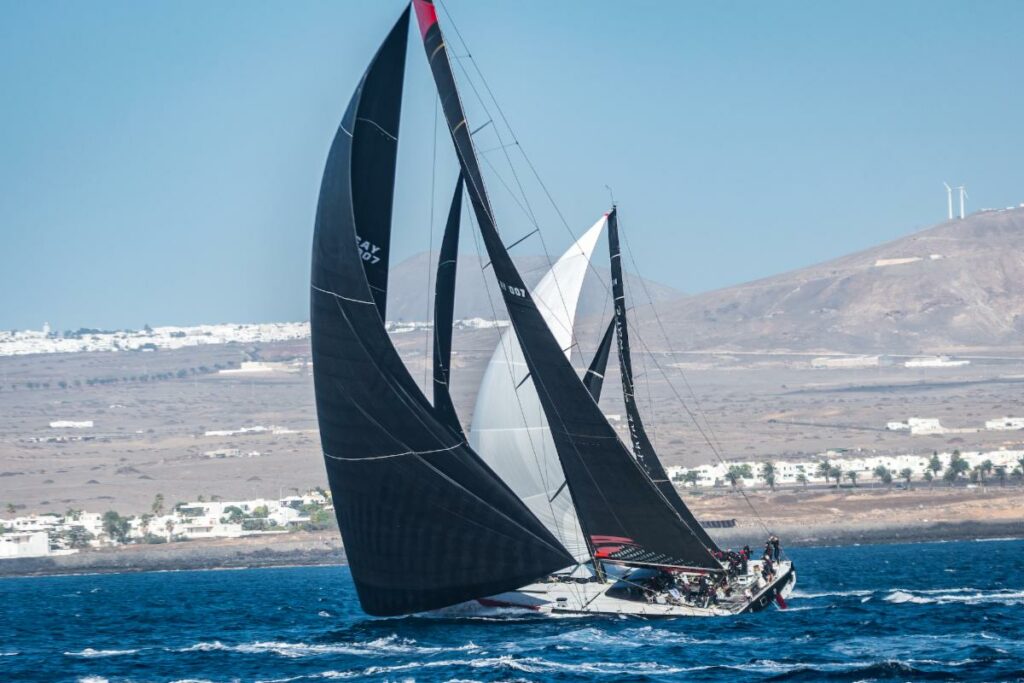 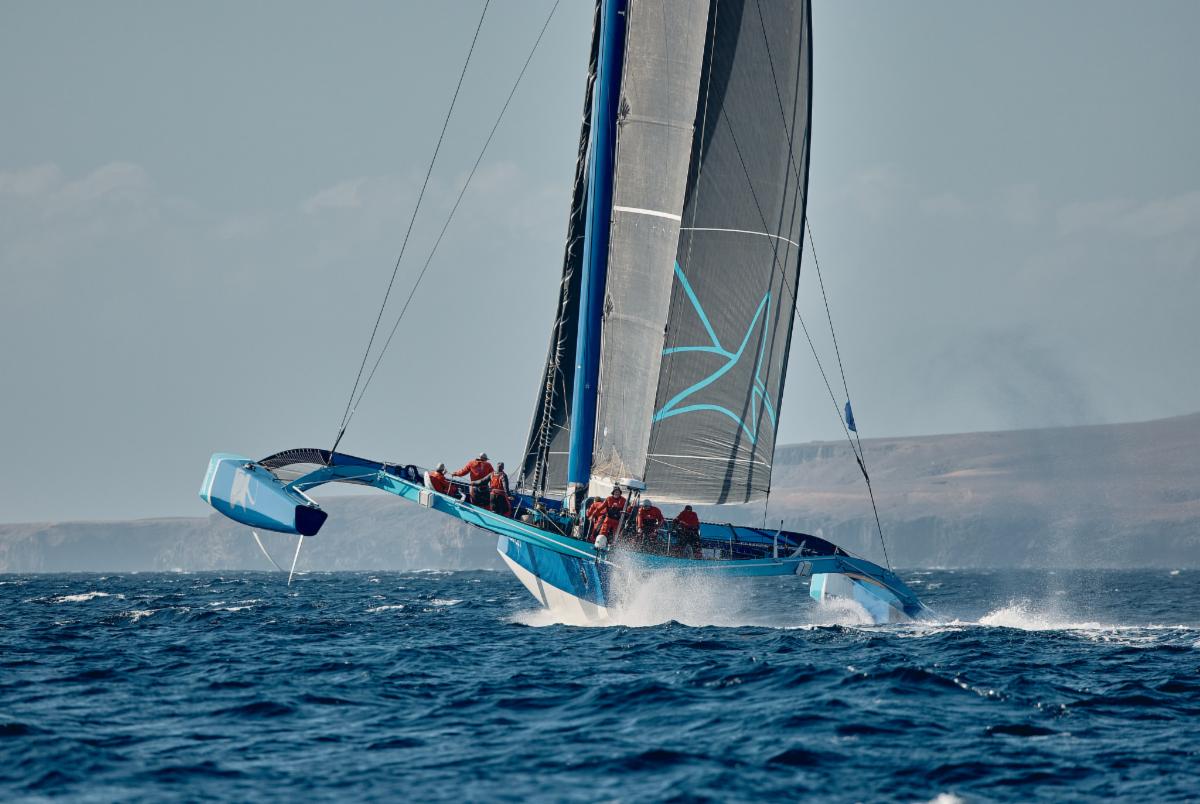 Peter Cunningham's MOD70 PowerPlay has been the dominant force so far in the MOCRA class. Pic - James Mitchell/RORC 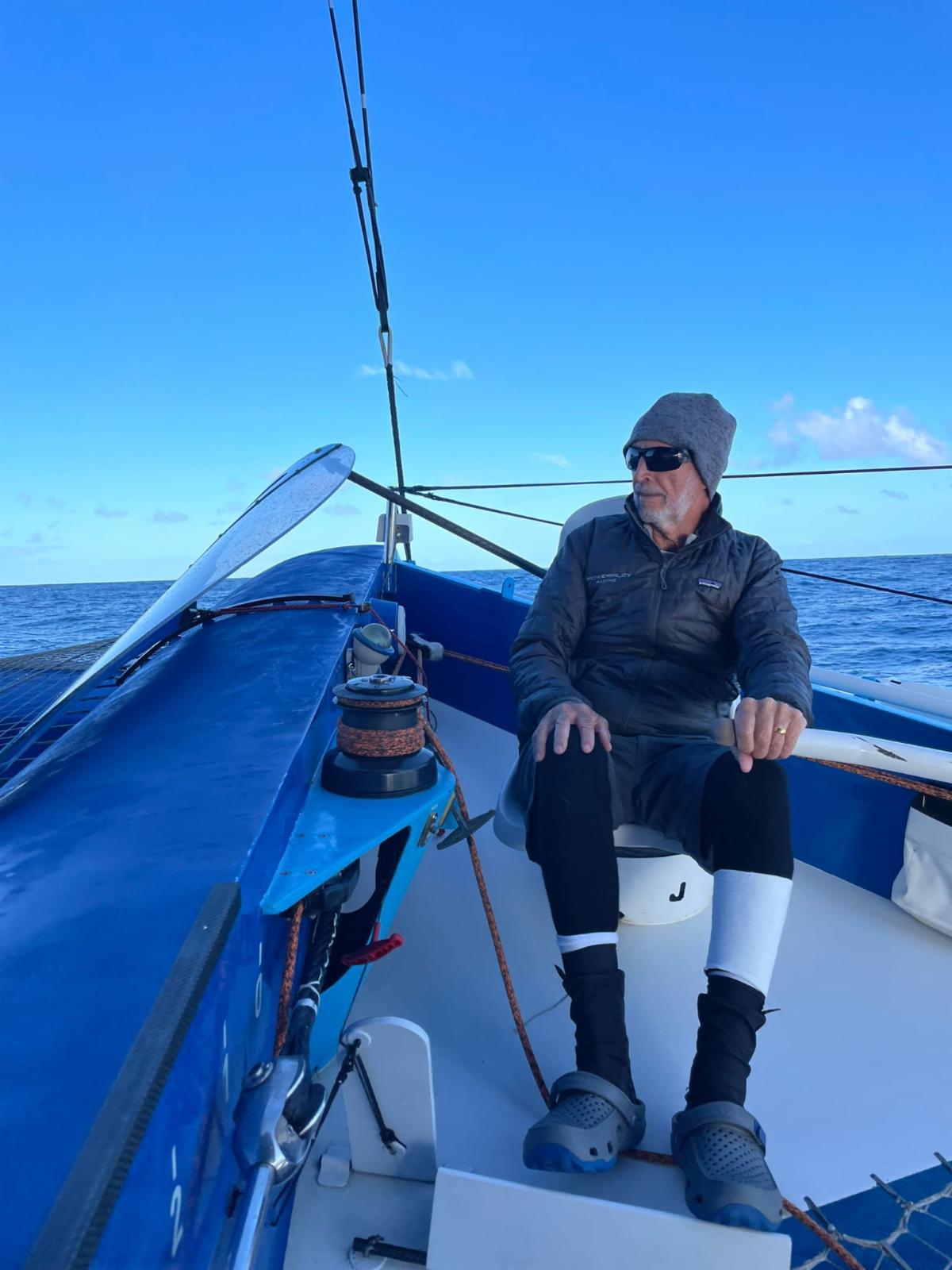 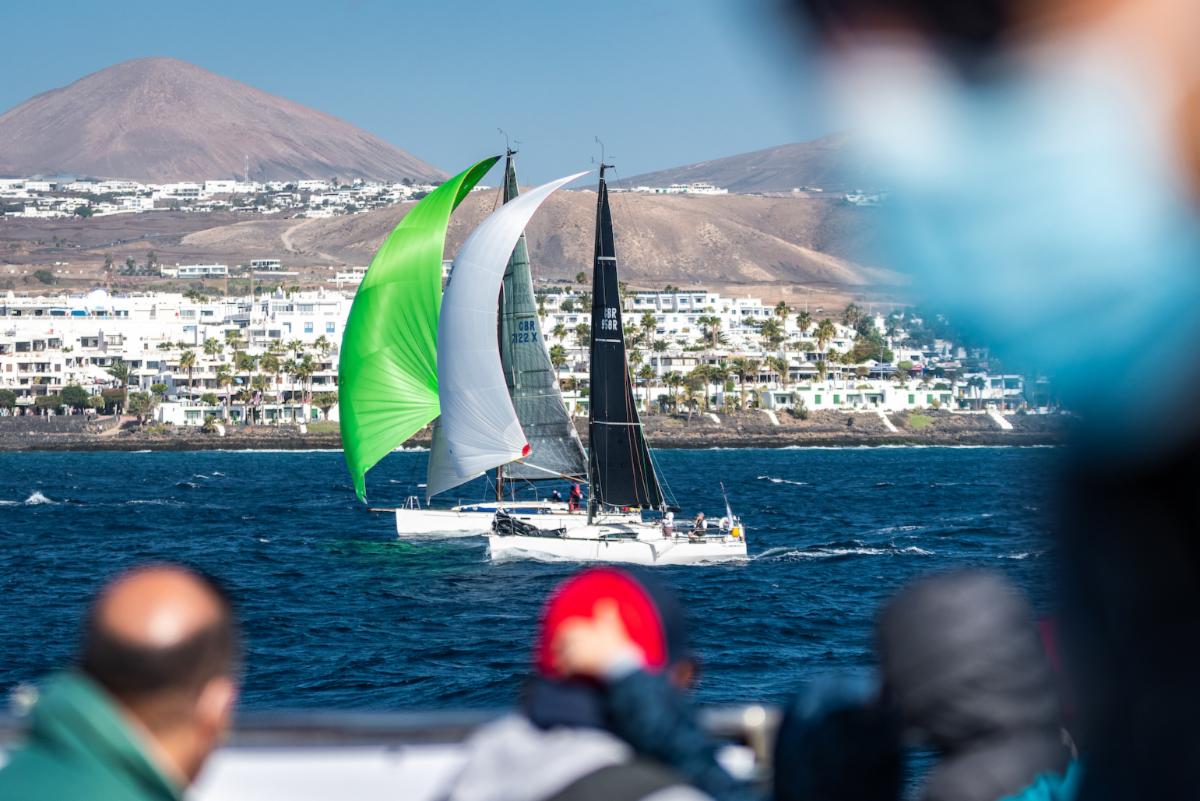 Richard Palmer on Jangada said: “[The sea state] has settled down now so the Code Zero is up and the autohelm is in charge.” Pic - Lanzarote Photo Sport 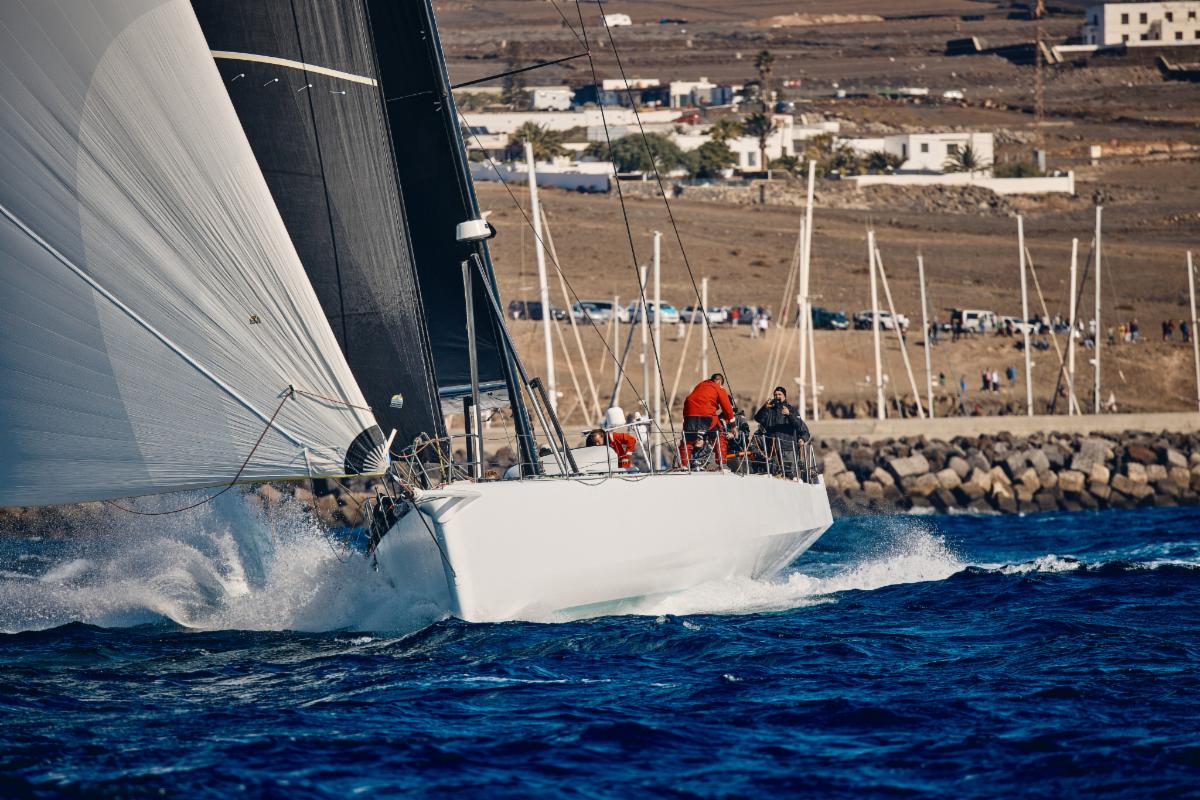 The Volvo 70 L4 Trifork (DEN) was the most northerly boat of the RORC fleet. Pic - James Mitchell/RORC 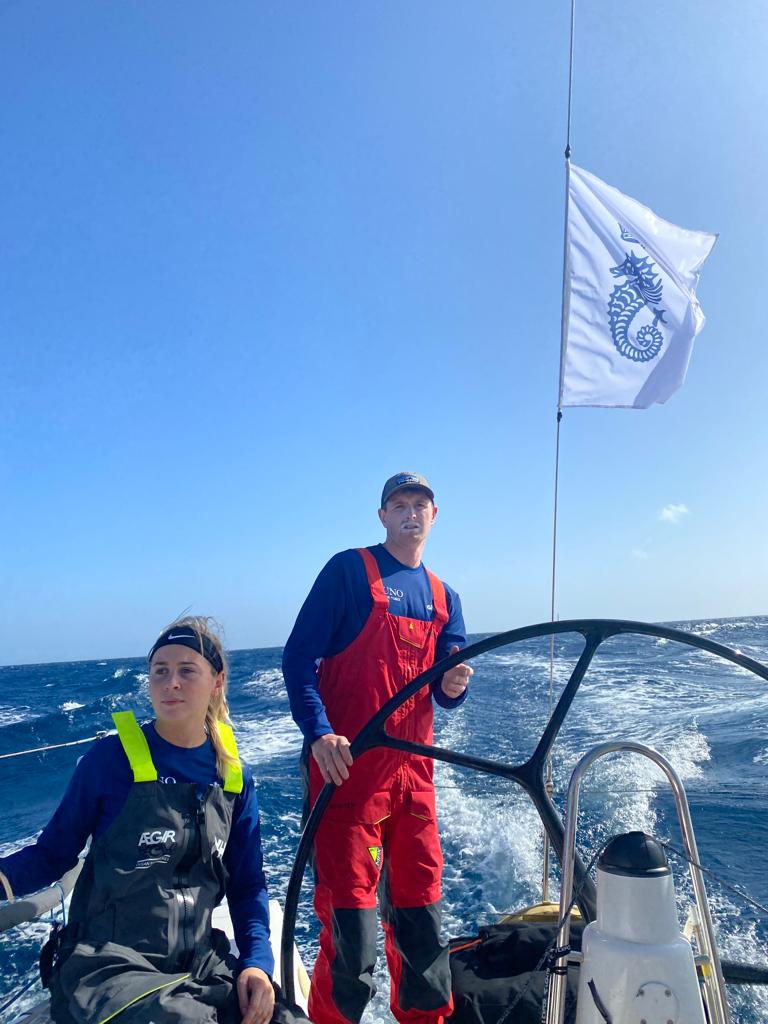 By sunset on the second day of the RORC Transatlantic Race, the majority of the record fleet had raced into the wide expanse of the Atlantic Ocean, leaving the Canary Islands in their wake.

This would normally result in blasting southwest in the trade winds, but this year’s race has a very complex weather scenario for the days ahead. Right now, a low-pressure system to the north is affecting the front runners who chose this high road. To the south, the low road, the breeze is better than expected. The low riders look to have made the right call – for now.

To the north, the leading multihulls have slowed down to under 20 knots as they enter the transition zone created between the low to the northwest and the trade winds to the northeast. Peter Cunningham’s MOD70 PowerPlay (CAY) has been the dominant force so far and has taken up a westerly position compared to Giovanni Soldini’s Multi70 Maserati (ITA), and Jason Carroll’s MOD70 Argo (USA). Tactically, PowerPlay has positioned between the competition and the finish. The race is on to cross the transition zone and gybe onto the fresh breeze to the northwest.

Peter Cunningham commented by satellite phone just before sunset: “A great start for PowerPlay with the boat log on 646 miles for the first day, but a little slower today.”

The 100ft Maxi Comanche (CAY) skippered by Mitch Booth gybed southwest shortly after dawn on day two and has stayed on the same gybe all day. On a broad reach, Comanche has been unstoppable, achieving over 20 knots of boat speed hour after hour. If Comanche continues at this pace, the race record will be smashed by over three days. Volvo 70 L4 Trifork (DEN) is the most northerly boat of the RORC fleet and aptly the majority of the crew come from Scandinavia. Trifork’s navigator Aksel Magdahl contacted the RORC media team:

“Here on Trifork everything is well. I have some respect for I Love Poland since I’ve seen that the boat is very fast, so happy to be well ahead after the start. Now it’s a bit of a strategy game. It is tricky to find a reasonable way across to Grenada. We’ve chosen to trust the weather models a bit around the development of the low-pressure systems and head north.

“However, being aware of the risk of the models getting it wrong, we didn’t go for the most extreme route around the Azores, like the computer software recommended. All the boats with different sizes and speeds have different timing around where they will be affected by the low, so it’s hard to compare much with Comanche or the smaller boats, so we’re looking at the other Volvo boats.

“At the moment, the weather looks nice for Comanche who can sail a shorter distance than us, just with a little stop in a couple of days while we will battle two or three low pressure systems! We finally gybed towards the west now, Sunday afternoon. It feels good after pointing towards Greenland for 24 hours!”

Max Klink’s Botin 52 Caro (CH) is still leading the class, but only just. Botin 56 Black Pearl (GER), helmed by Stefan Jentsch, and David Collins’ Botin 52 Tala (GBR) have all gybed west and are continuing their close battle. In reality, all three boats are vying for the class and overall lead, after IRC time correction.

Leaving Tenerife to port initially worked out well for Richard Palmer’s JPK 1010 Jangada (GBR), Jacques Pelletier’s Milon 41 L’Ange De Milon (FRA) and Ross Applebey’s Oyster 48 Scarlet Oyster (GBR). However, Andrew Hall’s Lombard 46 Pata Negra (GBR), which went south of Tenerife, is now through the lee of the island and starting to increase in speed due to the good pressure.

Christopher Daniel on his J/121 Juno (GBR) reported in as the team passed south of Tenerife: “Juno had a good first 30 hours, with the North Atlantic giving us a welcome reception to remember. With winds ranging from 30 kts to almost nothing, we’ve already used every sail in the locker!

“Before the start we made the decision to err towards the rhumb line and have just rolled the dice to sail between Tenerife and La Palma. Not an easy call, and we’ll only ever know whether it was correct when we all re-converge to the west of La Palma’s wind shadow.