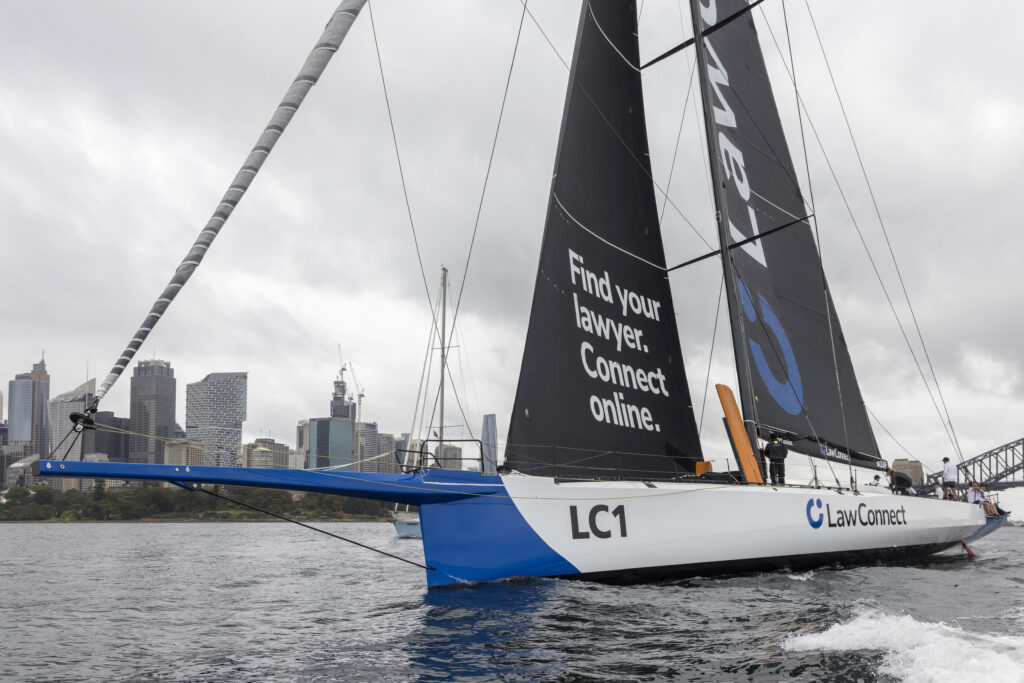 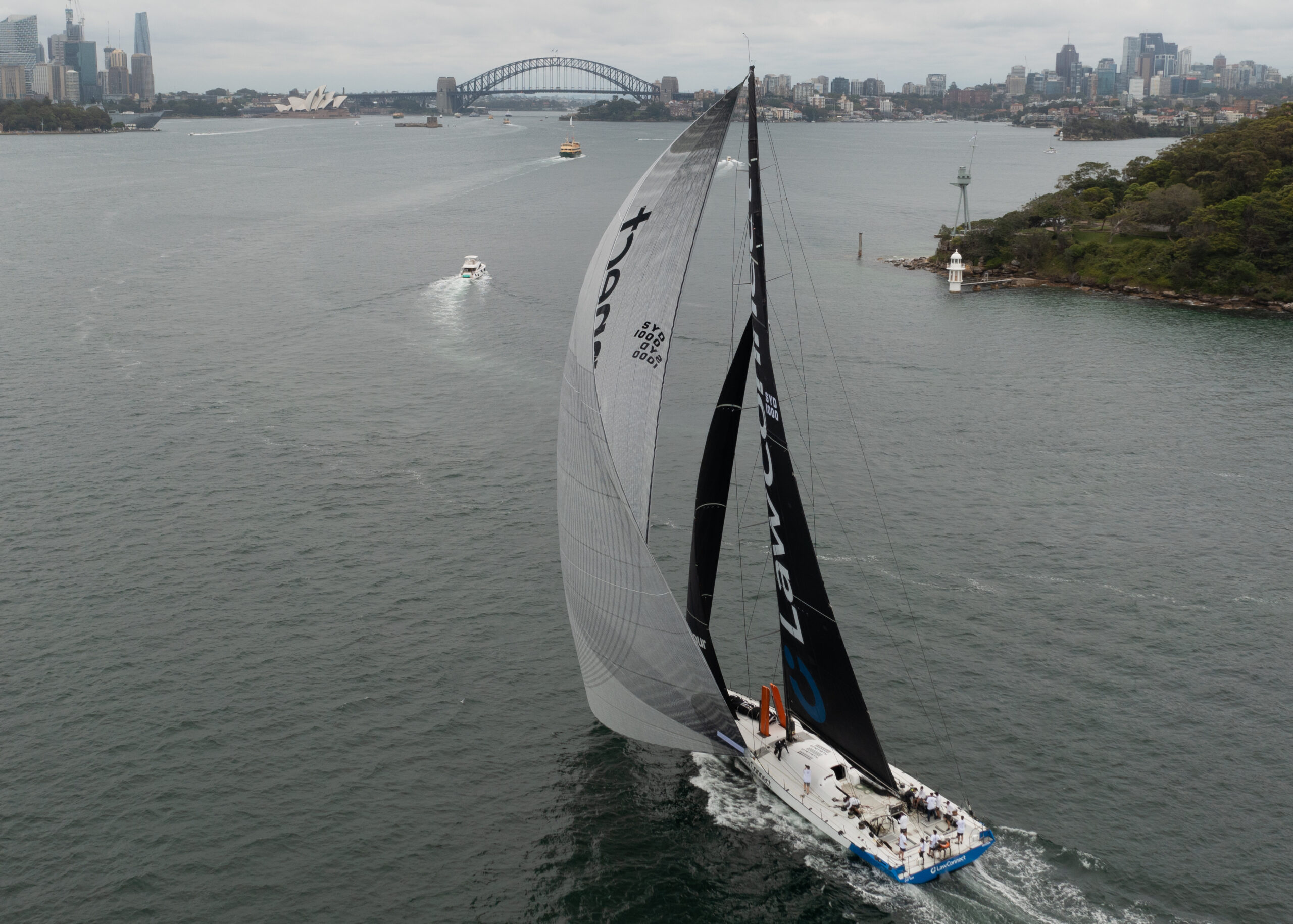 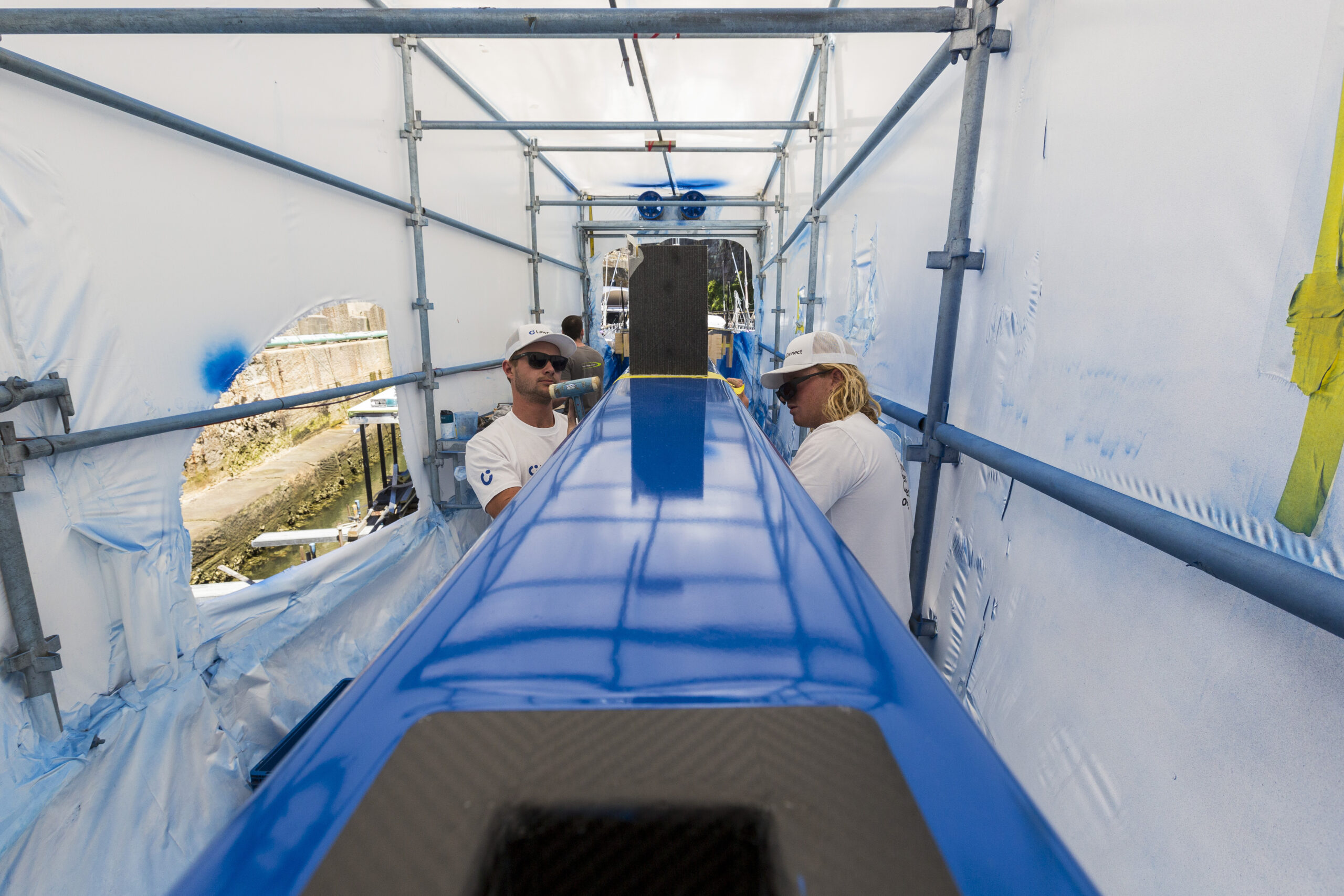 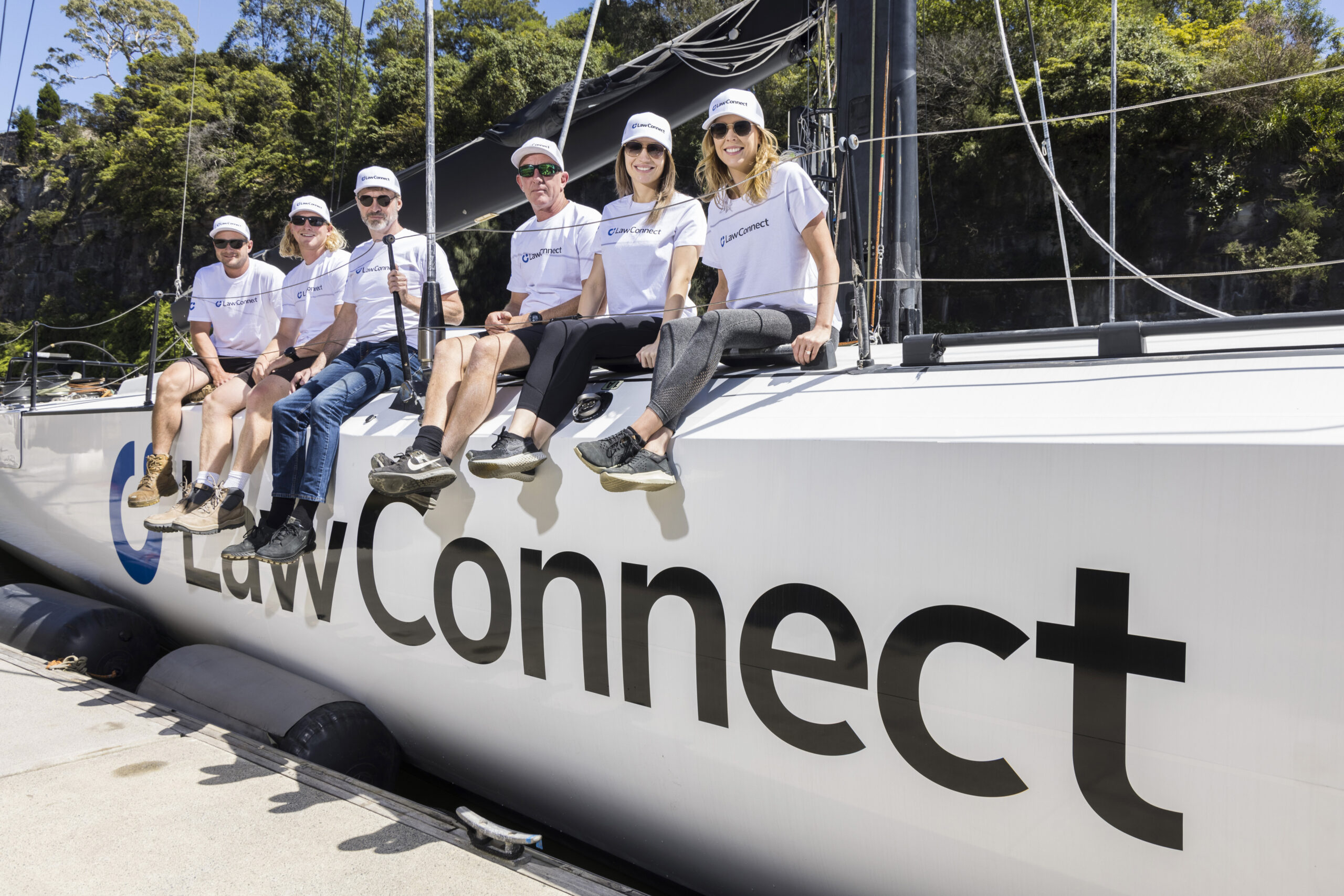 It took a few goes for the LawConnect team to smash the champagne bottle on the newly extended bowsprit of Christian Beck’s 100ft super maxi, but they eventually got there, christening the rebranded Juan-K 100 ahead of the 2021 Rolex Sydney Hobart Yacht Race.

It was a strong turn out, with over 50 in attendance to celebrate the yacht’s official partnership reveal with LawConnect.

The partnership company is a lawyer directory website, where individuals and groups can find the right lawyer who meets their specific needs.

At the event, a very impressive looking bowsprit was a talking point. According to Beck, the super maxi, formerly known as InfoTrack and before that Perpetual Loyal, boasts the largest sprit in the fleet, and potentially the world.

The purpose of the extended bowsprit is to increase the yacht’s overall performance. It increases the sail area by 15 per cent and allows the yacht to better perform upwind by having the sails sitting further forward. In addition, the crew can run three sails at once rather than two and in lighter winds it provides extra power and speed.

Beck, entrepreneur and founder of Leap Legal Software (creator of LawConnect) said the extended bowsprit could be the difference between first and second place.

“We’re on a trajectory here,” he said. “This will be my fourth Sydney to Hobart [aboard the super maxi]. The first year we came 24th, the second year we came fourth and the third year we came second. So, if this trend continues, we should come first this year.”

It wouldn’t be the first time the yacht took line honours the 628-nautical-mile race. In 2016, Perpetual Loyal, owned Anthony Bell at the time, broke the race record, finishing in one day, 13 hours and 31 minutes (the record was broken by Jim Cooney and Samantha Grant’s LDV Comanche in 2017).

On board for the 2016 record was long-time crew member and Boat Captain Ty Oxley, who will be racing in his 19th Sydney Hobart this year. The 46-year-old has won line honours three times, the first aboard Ludde Ingvall’s maxi Nicorette in 2004, then on Anthony Bell’s Investec Loyal in 2011, and the last time aboard Perpetual Loyal (also owned by Bell). Oxley is looking to turn his three wins into four. To win, there is no room for error.

“The gel of the team is really good,” Oxley said at the launch. “Last time I won [line honours] the Hobart race it was exactly the same, it was the teamwork that led us to beat Wild Oats and hopefully it’ll be the same again.”

The super maxi has 15 professional crew on board, in addition to Beck, and five Leap employees.

“It takes time to build the team, get the boat right. But I think we’re at that stage now,  where we’re getting to the peak of what our performance should be,” Oxley said.

The three yachts will compete against one another for the first time this year in the Cruising Yacht Club of Australia’s (CYCA) Blue Water Pointscore Cabbage Tree Island Race, 1.4km off the entrance to Port Stephens (to be held this weekend). The 172-nautical-mile race will be LawConnect’s first race with the new bowsprit.

Oxley said he and the team have 14 to 16 consecutive days of training planned (including Cabbage Tree Island and the SOLAS Big Boat Challenge on Sydney Harbour), to ensure that everything, from crew work to the new bowsprit, is in top form.

They’ll also use this time to train the five Leap employees chosen for the experience of a lifetime.

“They’re part of our crew so there’s not anyone who’s just a passenger. They’ve got a crew number and they’re able to participate in the race,” Oxley said.

Leap sales director Selma Raso is one of the lucky ones, sailing in her first Sydney Hobart, with little sailing experience, on a super maxi.

But the 32-year-old is up for the challenge.

“It’s the kind of stuff you don’t say no to,” Raso said. “And it’s hopefully going to send a message as well. I run a team of sales people, with quite a lot of females on the team. If anything, I want them to lead a fearless life. Just to have them see [what I’m doing] as something they can aspire to is rewarding.”

Raso, along with four other amateur sailors, will be on sail handling duties. Raso is looking forward to finding out what that entails in the intensive training period.

“I hope that means carrying sails not selling because I’m a sales manager. Please don’t tell me I’m doing that, I thought this would be a break!”

Raso couldn’t be happier about being on board a Sydney Hobart line honours contender.

“It would be incredible if they do [win], particularly after last year and the race not happening. I know everybody worked so hard,” she said.

The Sydney Hobart was cancelled last year, days before the start date, due to a NSW Covid-19 outbreak that translated to a 14 day lockdown in Tasmania for all taking part.

The crew couldn’t be more excited to get to Hobart, preferably with the other 105 competitors in their wake, following a year off.

“My dream as a child was to do the race,” Beck said. “I used to watch it as a kid on the TV. And once I did it, I decided I wanted to win it. We’ve been working very hard to do that.”

And could another race record be in the books? Oxley’s not ruling it out.

“It’s a bit early yet [to make that prediction]. I’ve broken the record before, so let’s just wait and see.”