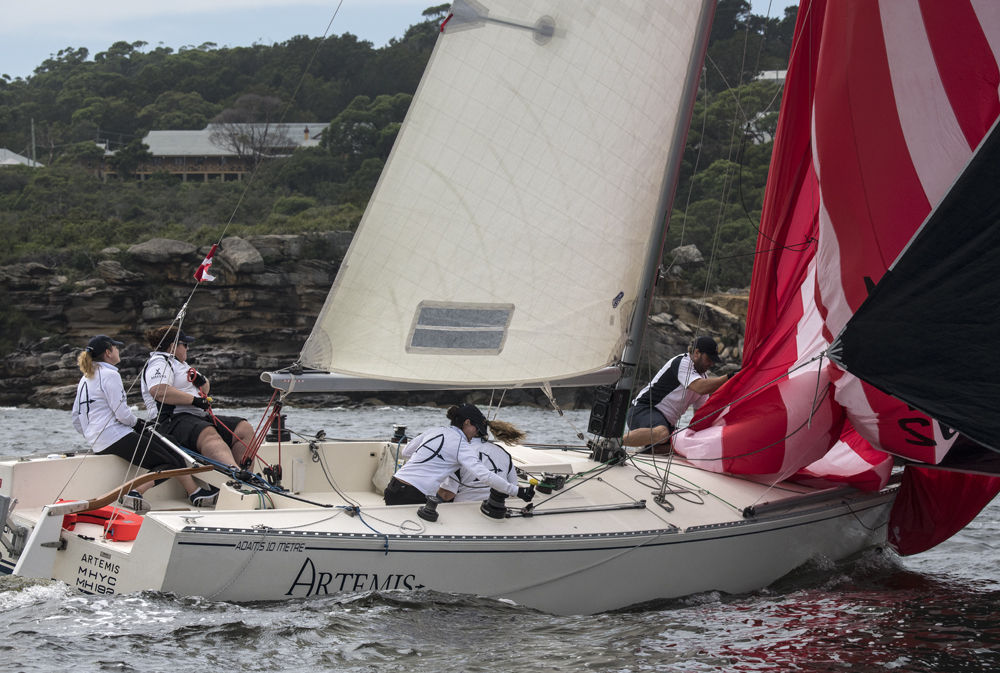 Women are involved at all levels in this event, from sailing to race management on and off the water to media boat drivers and protest committee members.

Encouraged by the national authority, Australian Sailing, and clubs around Australia, women’s participation in sailing is growing substantially via specialised programs, learn to sail classes and Women’s regattas.

“I turned up to Middle Harbour Yacht Club to try twilight racing on a Thursday night. I loved it – I couldn’t get enough,” she said. “Then my brother-in-law and I bought Artemis in February last year,” she said.

Going into today’s final races, Richardson leads the pointscore, unusual for a relative newcomer racing against those who have been around for years. And the class is super competitive.

In the Yngling keelboat, once an Olympic class, you will find Jan Newland. She is contesting the Yngling NSW Championship and is in a good third place overall coming into the final day.

In Performance Spinnaker racing, one of the largest fleets sailing at the regatta on Sydney Harbour is Lisa Callaghan with her Sydney 38, Mondo. Callaghan is also the President of Manly Sailing Club. Stephanie Cook is the enduring co-owner of Rumba, a Northshore 370. In the same division is Julie Clark, who has entered Senta, a Beneteau First 35.

Cook’s advice for newcomers: “Try twilight sailing at your local yacht club. Most have a list you can put your name on. It’s a great way to see if you like the sport . It’s very friendly, social. You don’t usually need experience to do the twilights and it fits in with most people’s work hours.

“You could also do a competent crew course through your local club’s sailing school. They normally introduce you to boats to race on as part of the deal. “They’re not cheap to buy and run, so you want to know you’re in for the long-term, not just a season.”

Racing aboard Keiran Mulcahy’s Soozal in the IRC Open Class offshore, and currently placed second, is Stacey Jackson. A veteran of 14 Sydney Hobarts, Jackson skippered an all-female crew on Wild Oats X to second overall in the 2018 Hobart. She used that campaign to highlight the high calibre of women sailors. She also has a Volvo Ocean Race behind her.

An internationally respected yachtswoman, Jackson is a huge advocate of women in sailing and a mentor through the international women’s Magenta Project. She has a vision – and that is to see the day when there is parity in numbers between male and female sailors.

Lisa Wilkinson does mainsheet on husband, Matt’s competitive Farr 30, Foreign Affair. “She’s very good at it – she does a very good job,” says Matt, “She races with us in all inshore events.”

Annie Taylor from the Northern Beaches is a long-time inshore and offshore racer. Taylor sails anything from one-design to small and larger yachts. At the Sydney Harbour Regatta she is in the IRC Racing division aboard Pete Farrugia’s Bullwinkle.

On the Royal Prince Alfred Yacht Club start crew is another Northern Beaches resident, Rosemary Merrington. She and husband Steve are integral to on-water race management teams at regattas and events Australia wide.

“It’s been at least 15 years and I still enjoy it,” says Merrington, whose interest is highlighted by the Merrington sons, Peter ‘Billy’ and Anthony, who sail at the grand prix level.

Sailing Administrator at MHYC is Catherine Rofe, who is also on the race committee at Manly Yacht Club. Rofe raced aboard the all-female crew aboard Calibre in the Sydney 38 One Design NSW Championship last month. Skippered by Liz Charles, the boat was chartered for them by the Sydney 38 Association which was keen to have more women sailing in the class and perhaps buying into it.

Although the crew had not sailed together on the one-design Sydney 38 before, they finished fourth on countback in a quality field, indicative of female talent in Australia these days.

“She is all over sailing,” MHYC’s Sailing Manager, David Staley says. “If there’s a race on, J24s, Sydney 38s, whatever, she’ll be there. She’s passionate about sailing and does a great job with us.”

Driving a media boat this weekend is MHYC youth sailing instructor, Jess Longstaff. She coaches the Optimist class and has a background sailing Lasers, Pacers and 420s.

“I started sailing at six or seven through my dad,” Longstaff comments. “I love the different people of all ages I meet, sailing a lot of different boats. I just love being on the water,” says the 18-year-old, who was Sailing Captain at Wenona School.

On the protest committee, the Chairperson is Erica Kirby. She has been involved in umpiring, judging and sits on protest committees for the last 12 years. She is a rarity and says, “I’d love to have more women involved, especially in NSW. I’d advise interested women to get involved in the jury at your local club and see if it appeals. It’s very rewarding – I love travelling to different events.”

MHYC is a champion of women involved in all aspects of sailing. Julie Hodder is a past commodore and remains a respected navigator in offshore racing with 13 Sydney Hobarts on her resume. She has also co-owned grand prix racing yachts. Hodder would usually be sailing at this event but was tied up with a niece’s wedding this weekend.

All information on the Sydney Harbour Regatta, including results: http://www.shr.mhyc.com.au