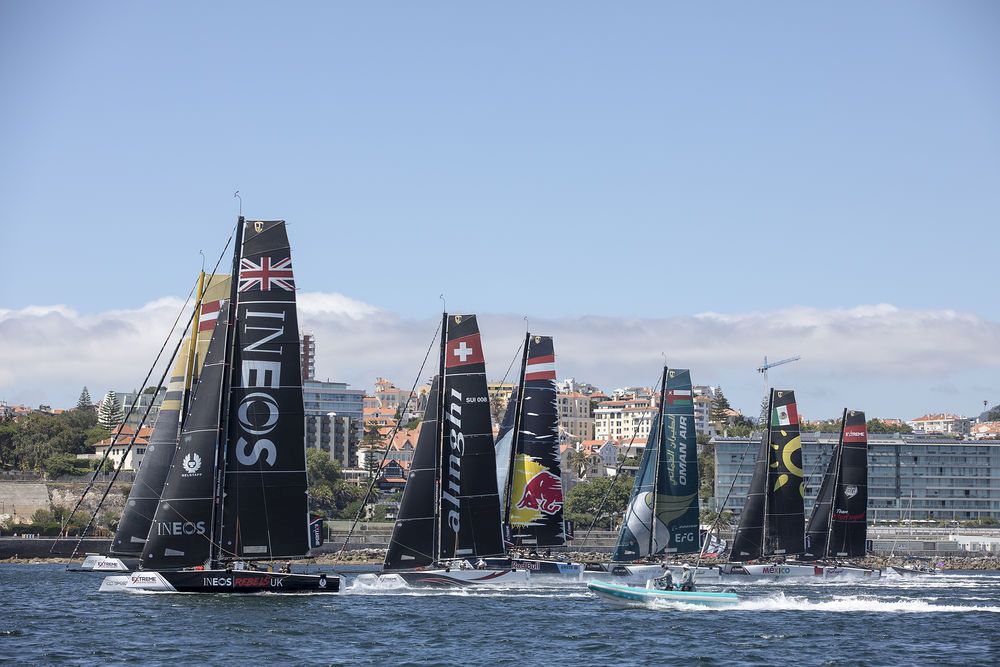 Having led the fleet of super-speed, hydro-foiling GC32 catamarans on every single day of racing, Swiss team Alinghi secured another Act win today in Cascais, Portugal, in the mid-season battle for the Extreme Sailing Series top spot.

Having entered the Cascais regatta tied on overall points with Danish SAP Extreme Sailing Team, the Swiss were pleased to break free and into the lead once again.

“It's great to win here in Cascais,” said co-skipper and helm, Arnaud Psarofaghis. “We've sailed really well all week and didn't really have any bad races. The team did a great job of flying around the racecourse. Overall, very happy.”

The Danes put up a good fight, finishing the Portuguese Act in second place. The team's skipper, Rasmus Køstner commented on the battle that ensued on the water.

“It was a pretty intense day trying to fight it out with Alinghi,” he admitted. “They're not making many mistakes at the moment so their win is well-deserved. We will continue the battle in Cardiff.”

They may not have taken the top spot, but SAP Extreme Sailing Team did clock the fastest speed ever recorded in the 12 year history of the Series. Making the most of Cascais' big breeze and perfect foiling conditions, the Danish squad hit a top speed of 37.9 knots on the second day of the event, an insight provided by SAP. They were awarded the Zhik Speed Machine trophy for their achievement.

Although fans are used to seeing Oman Air on the Act podium, the Omani contingent fell off the pace in this week's racing. A lack of consistency in their results across the Act saw them give up their third place spot on the event's penultimate day, allowing British INEOS Rebels UK to finish day four with a foot on the podium for the first time this year.

“It's a positive step forward to take third place here in Cascais,” said an enthusiastic Will Alloway, Skipper for the British squad. “The conditions out there today were really testing so this is a great result for us. Each Act we are improving but there's still plenty of work to do. We're now looking forward to heading home to the UK for the next event; we're excited to race in front of home crowds in Cardiff.”

Oman Air did, however, manage to hold onto their third place position in the overall rankings.

For the Portuguese wildcard crew, Cascais has been a steep learning curve. Taking part in a programme devised to give local young sailors experience in the ultimate Stadium Racing championship, the boys on board Team Portugal were truly put through their paces over the last four days of racing. Skipper and mentor, Luís Brito, was full of respect for his crew.

“I'm so proud of these young Portuguese sailors,” he said. “Today was even tougher for us than the previous days, but we're really pleased with the Team Portugal project and how we've faired in the Act. We hope to return next year to sail for our country once again.”

“It was amazing to race here in Cascais,” said a pleased Helder Basilio, crew for the team. “We've had a great four days of sailing, with perfect conditions each afternoon. There has been a lot of local support on shore and we've achieved our goal of winning the Owner-Driver trophy, so we're very happy.”

Idreva Zephyr Foiling broke Team France Jeune's string of Act wins, as the teams finished first and second respectively. Culture Foil rounds up the podium in third. The next event in Cardiff will be the deciding Act for the Flying Phantom Series.

Having worked towards ensuring Act 4, Cascais was as sustainable as possible, the Extreme Sailing Series achieved recognition in the Sailors for the Sea 'Clean Regattas' awards system, securing the Gold Award for the event.

A global tour, the Series next heads to Cardiff, UK, from 24 – 27 August, before heading further afield to San Diego, USA, and Los Cabos, Mexico. With only three Acts left this year for the GC32 sailors, the pressure mounts and the competition gets fierce. The Extreme Sailing Series trophy is within reach.