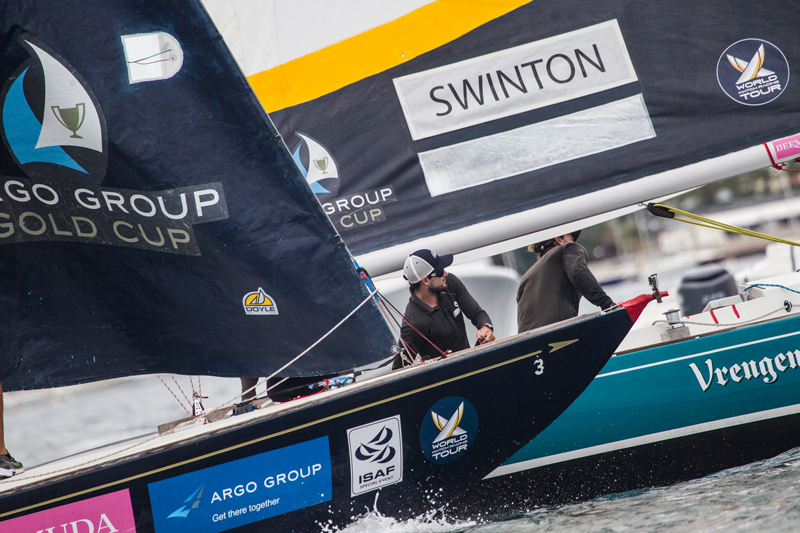 London, UK (14th January 2016): Teetering on the edge of the podium for the 2015 World Match Racing Tour (WMRT) championship is Australia’s Keith Swinton. The 30-year-old skipper is currently fourth, ten points behind Taylor Canfield and a podium finish overall would better his previous best on the World Match Racing Tour, of a fourth place in 2012.

Swinton’s present position came after an uncharacteristically short season, competing in just three events on the WMRT in 2015 following sponsorship issues earlier in the year. “It’s the least match racing I’ve done in a long time,” he admits. “Obviously we lost Alpari as a sponsor and that left us in a difficult spot. I think a lot of the team were happy to do it again if we had decent sponsorship, otherwise they preferred to go off and do other things.”

Despite this they managed a minimal season, comprising an eighth place at Congressional Cup, a third at the Stena Match Cup Sweden, before landing a second at the Argo Group Gold Cup – the penultimate event on the World Match Racing Tour, launching the team up the leaderboard to fourth place.

“The Argo Group Gold Cup in Bermuda was a key event for us – we had a really good time there.  We took out Ian Williams in the Quarter Final and it was a very, very close final.  It was a great result.”

This being his eighth consecutive season on the WMRT makes Swinton officially an ‘old hand’ and now familiar with the venues and the boats, he says it doesn’t take his team long to get up to speed at events. “Obviously lack of practise can be an issue, but I think we’re at a point where the understanding’s there. So by the time you’ve got through Qualifying, you’re back to the same level as everyone else.”

When not on the Tour, Swinton has relinquished the helm to be mainsheet-tactician for Don Wilson, the Chicago Match Race Center proprietor. During 2015 they competed in several events in Chicago, including the USA Match Racing Grand Slam series event there. “I really enjoyed doing that. It’s helped me, moving to a different position. It just opens your eyes up,” says Swinton.

However, he has also been sailing on the M32 catamaran where Wilson has two based out of his Center in Chicago.

A long term exponent of ‘traditional’ match racing, Swinton is intrigued by how the new look World Match Racing Tour will work: “My general feeling is that it’s always good to evolve and move forward.  It is really exciting racing the M32 high-performance catamarans. It’s a fun boat, not overly complicated and that’s good for the World Match Racing Tour: Anyone can sail the boat. A big part of match racing has been jumping onto different boats, but this is an opportunity to make a big step in another direction – which I think is fun, especially good for the younger guys. There’s going to be a transition period, but it’s definitely exciting.”

On Don Wilson’s M32s they have already sailed some smaller events in the USA and in December took part in a training week in Bermuda, as a prelude to competing in the four event M32 Series Bermuda. Swinton will continue to compete with Wilson on the M32 Series Bermuda alongside match racing sailors, Sam Rogers and bowman Josh McCaffrey and Swinton’s regular trimmer, Ted Hackney.

Aside from his mainsheet/tactical duties, Swinton has been able to helm the M32 quite a bit too: “It’s a fun boat to sail – not particularly hard, but obviously the level will increase.

“Obviously the [absence of a] headsail’s a pretty big talking point, but in terms of the general sailing of the boat, I don’t think it’s a major. In a straight line it’s at least the same speed without the jib.  Whenever you have to tack in a breeze and waves, it’ll be a bit of a challenge, but everyone will have to learn the best way to do it and obviously there are techniques that help you.”

However no jib helps keep the boat simple. “I think that works well for the match racing format – a simple boat that not a lot can go wrong with.”

For Swinton the M32’s most impressive feature is its acceleration. This is due to it being so light and although it doesn’t have foils like the America’s Cup catamarans, it does have curved boards that provide some vertical lift to the hull, enabling some still impressive top speeds: “We did pretty close to 30 knots a couple of times in Bermuda – the performance is good.”
Swinton also has first hand experience of capsizing a M32 – this was a lateral capsize rather than a pitchpole over the leeward bow, which he reckons would be hard given the amount of buoyancy forward in each hull.

“Actually it was really cool, not frightening at all: I was up on the windward hull and I just climbed down.  We played around trying to right it ourselves without a chase boat, but we couldn’t quite manage it.  With the chase boat it didn’t take very long at all.”

They rounded the capsized boat head to wind and then the RIB, fitted with just a 50hp outboard, simply towed with the boat’s capsize line and, ‘hey presto’, it popped upright. “To be honest it was a good experience to get it back upright without any trouble or damage, just to get a feel for what you actually have to do if you do capsize – and it was in pretty wild conditions.”

Another new feature of the M32 for Swinton is its racks, aimed at positioning the crew further outboard, increasing righting moment, power and speed. Swinton says that nudging racks while match racing less of an issue than mark roundings: “You have to judge where the rack is, which is not always that easy.”

Thanks to Don Wilson having a pair of boats, Swinton probably has had more experience match racing M32s than most. So how does he see the boat-on-boat racing panning out? “It’s going to be completely different. There will be certain tactics, but I think it’s going to be more about sailing your own race, sailing fast, sailing to the breeze and at times you’ll almost have to forget about your competitor, although it can be like that at times in monohull match racing.”

He is also a convert to the America’s Cup-style courses with reaching first and final legs. “I think that works really well – there’s still some opportunity to mess with the other boat, but also still both boats can get off the line without there being a huge deficit.”

In the meantime, the next match racing for Swinton will be the Monsoon Cup over 26-30 January in Johor, Malaysia. “Our aim is to make the semi-final and then whatever happens from there is a bonus. We’re in fourth now and it’ll be great if we can get to the podium, but we’ve got to hope one of the others bombs. Anything can happen – it’s new boats, new venue.”