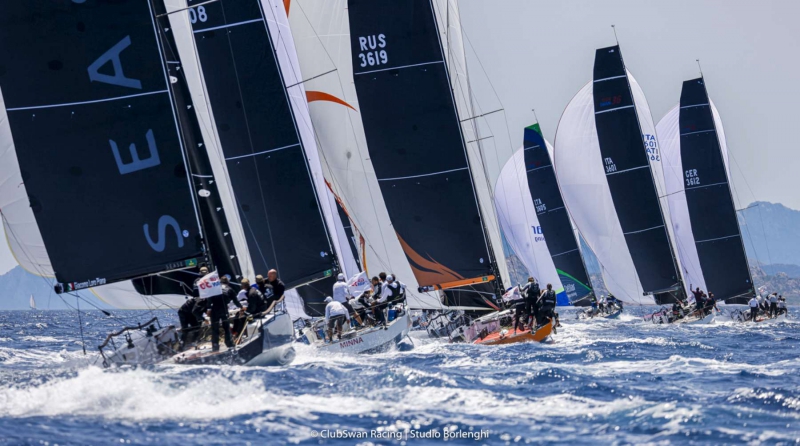 Porto Cervo: Three races were run at the Swan Sardinia Challenge today; the current leaders are Hatari (ClubSwan 50), G-Spot (ClubSwan 36), Nadir (ClubSwan 42) and Ulika (Swan 45), denoting changes at the top in some classes with just one day remaining.

An ideal Mistral breeze of 14 to 18 knots allowed the Race Committee to run three races in for the fleet of 34 yachts divided into four classes. The course was set up just off Porto Cervo and was particularly technical, giving tacticians and strategists lots of opportunities to improve positions.

All classes were compact, rounding marks and gates in tight groups and finishing within seconds of each other, making for exhilarating racing.

Two wins and a second for Hatari give her the ClubSwan 50 lead from Sparti. She is helmed by her German owner, Marcus Brennecke, who has Marcus Wieser calling tactics and Michele Ivaldi as strategist.

Sparti lost her overall lead after placing sixth in the day’s first race, despite a good start, but came back with a third and a win, so are just four points behind Hatari.

Brennecke commented on the day: “I’ve known Porto Cervo since the 1984 Sardinia Cup, and again it has offered us a fantastic day. We sailed really well. We’re four points ahead, but tomorrow could change everything. Sparti has a strong team and we recovered well in the third race.”

G-Spot stays in the lead of the ClubSwan 36 Class, still ahead of Vitamina, thanks to a win in the day’s final race. In third place, and just one point behind Vitamina, is Lorenzo Mondo’s Farstar (Alvaro Marinho tactician) that won the first race followed by a third and a second.

“We’re really happy with the way today went,” said Simon Sivitz, G-Spot’s mainsail trimmer. “We worked well and stayed concentrated throughout the day. We think we’ve found a good tuning for these conditions, even though there’s still a lot to learn about these new boats.”

There were some changes at the head of the ClubSwan 42s, where Pedro Vaquer Comas’ Nadir bumped Koiré – Spirit of Nerina, which wasn’t at her best – out of first place. In the Swan 45s, Stefano Masi’s Ulika still leads after two wins and a third. She will head out to race tomorrow with a two-point lead over Lennard van Oeveren’s Motions. Klaus Diederichs’ Fever is in third place.

Hatari, Farstar, Nadir and Ulika, the winners of the day, were awarded trophies in Piazza Azzurra, by Cantine Ferrari Trento, sponsor of the third day of racing at the Swan Sardinia Challenge.

Tomorrow is the final day of the first edition of this event, dedicated to Nautor’s Swan One Design classes. It is also the second in the Nations Trophy. The forecast for tomorrow is for light and variable breeze and racing is scheduled to begin at 11:00am.

There are 12 nations represented here in Porto Cervo for the Swan Sardinia Challenge, organised by the Yacht Club Costa Smeralda together with Nautor’s Swan and ClubSwan Racing.