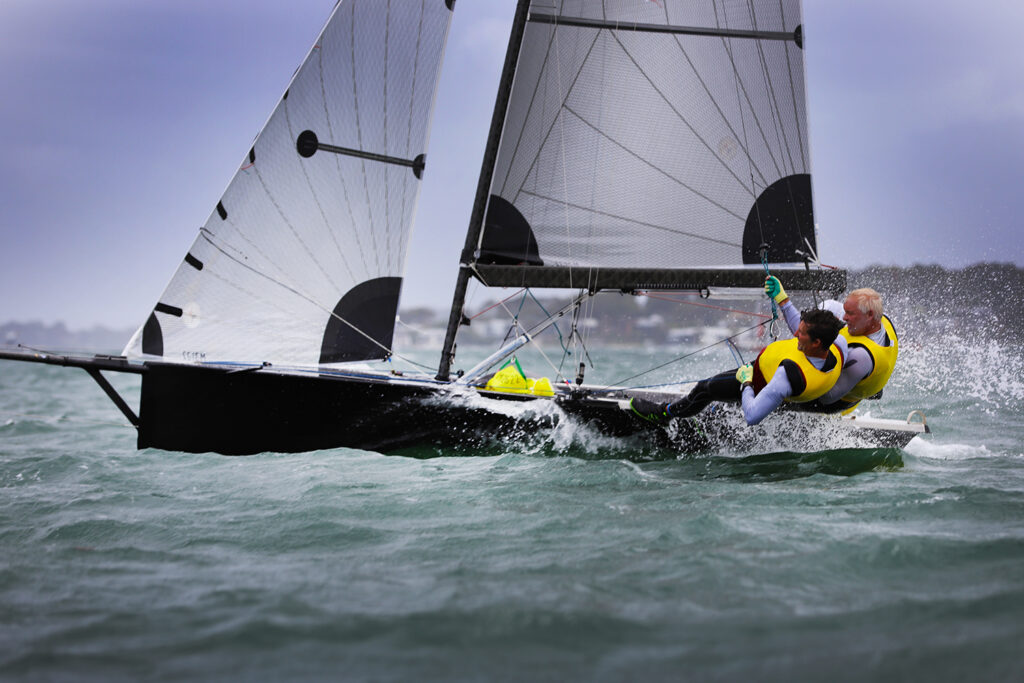 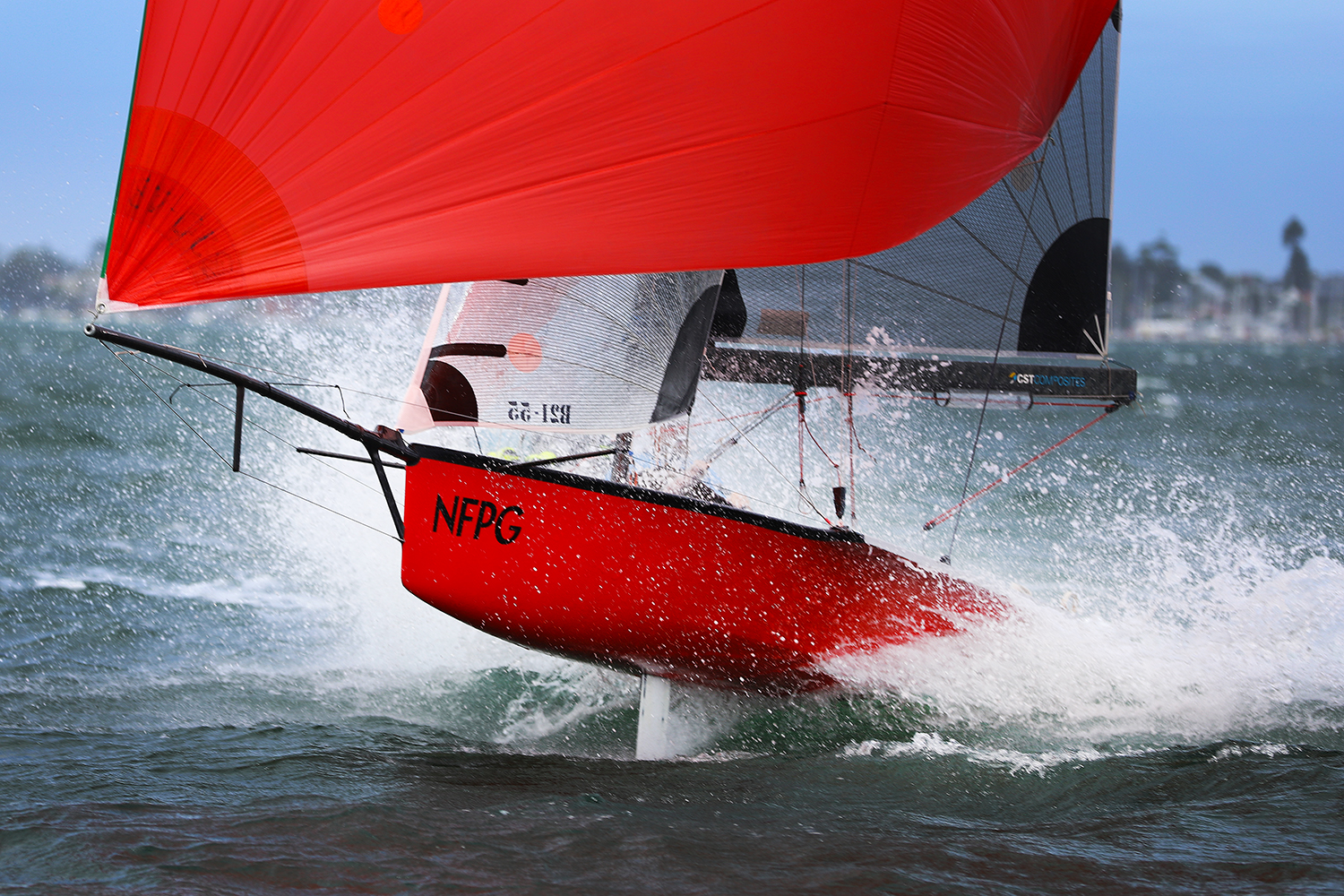 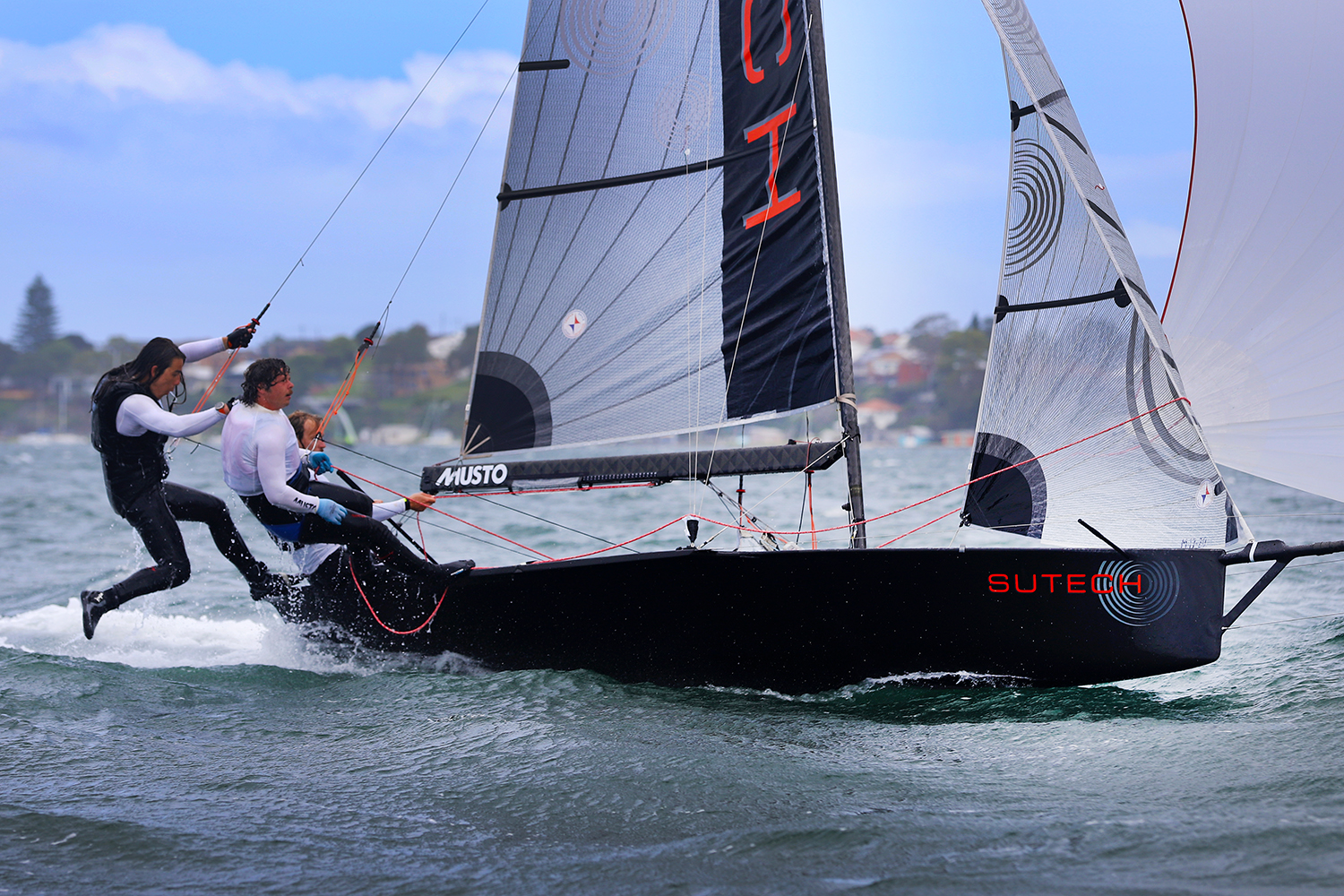 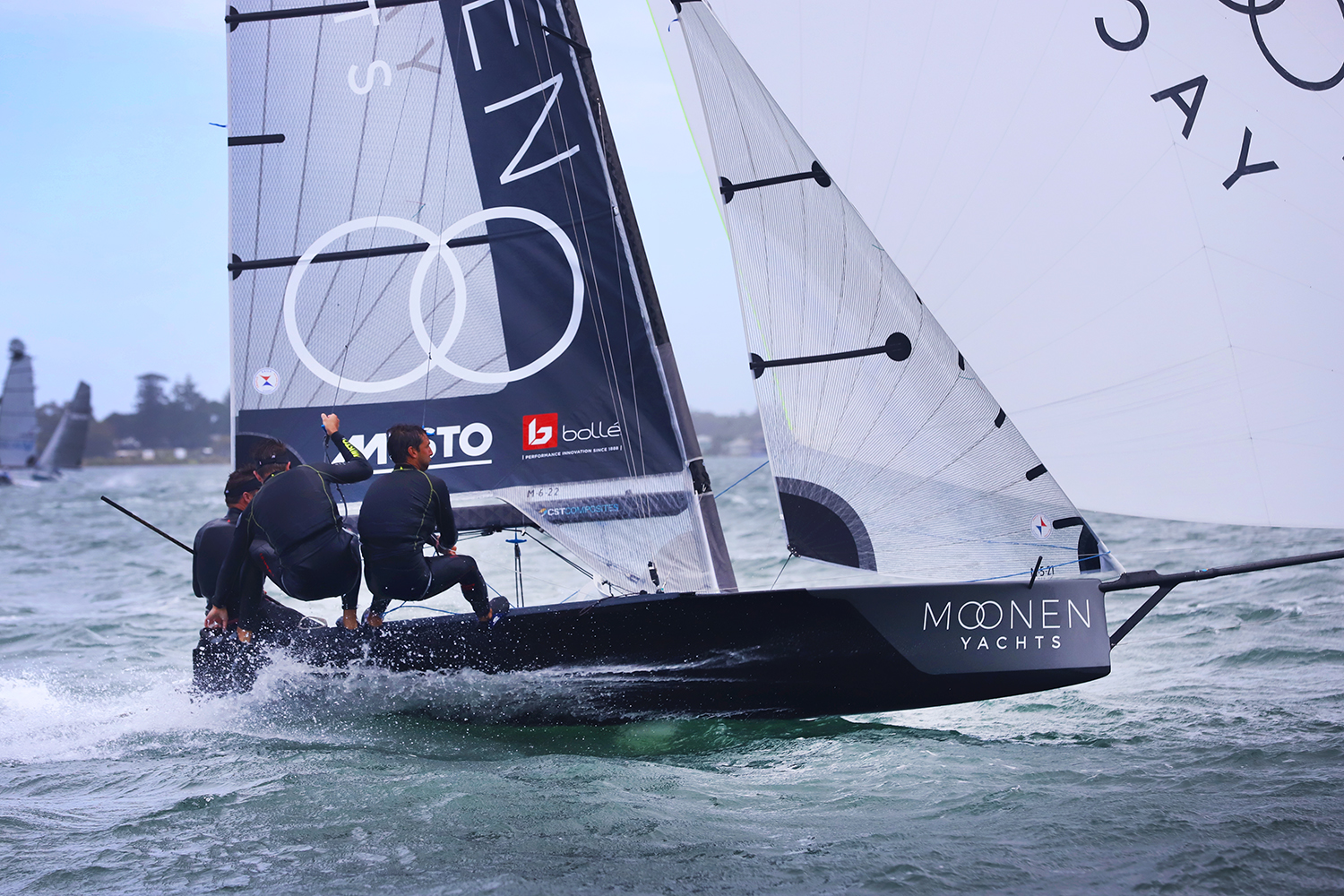 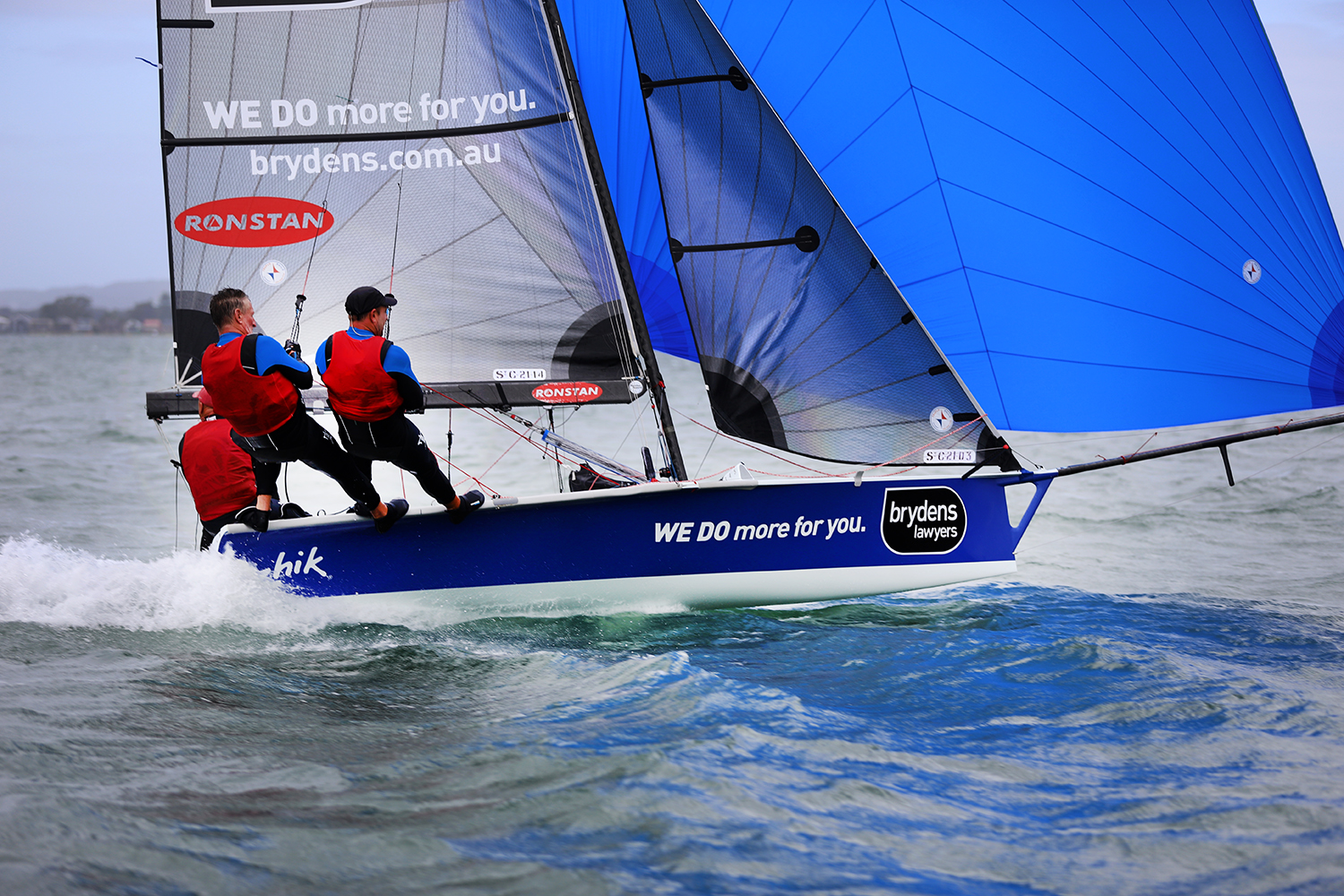 With boat speeds nudging 26 knots, and a nor’east wind strength not far behind, it was survival of the fastest in Race 6 and 7 of the 2022 Red Pumps 16ft skiff Australian Championship today, hosted by Belmont 16s on Lake Macquarie.

SKE Electrical and Jamesco both snapped their second-rig masts, two boats broke rudders, one snapped its top batten in a bear-away, and there were multiple retirements. Back on shore, crews were applying eye drops by the litre to salve their blood-red peepers, having copped a saltwater fire-hosing.

Nevertheless, most relished the frenzied, high-speed action: “You’re relying on your feel, your senses, your crew and how much noise they’re making,” explained Contender Sailcloth skipper Will Howard.

Skiff youth sailor Matthew Meaney from Tooheys Extra Dry said: “We were loving it, especially that second race when it picked up a fair bit – some of those downwind runs we were just hanging on for dear life.”

But through all this, heavy air specialists Moonen Yachts came through unscathed and with two solid victories. They’re the only crew to win multiple races in the series – three out of seven – and they now sit second overall with two races to play and one further score to drop.

Nathan Wilmot’s Ronstan crew will retain the yellow leaders’ vests for tomorrow, having posted a fifth and a third today. But strong winds are again predicted, forcing an earlier start time of 11am, which may again favour Turner.

“Strong winds have always been our favourite conditions. It’s what skiff sailing is all about – going fast and keeping it loose,” Turner said. “We were just hanging on all day long and trying to see where we were going through the spray. But we managed to keep everyone in the boat, keep the rig in the air, and got two wins to show for it.”

Insight Building Services claimed second place in the heat but subsequently took on water inside the hull, which bogged the boat down and made the runs perilous. They limped into 24th.

The Contender crew clicked into gear in Race 7, finishing second across the line – partly making up for the Sydney Hobart disappointment aboard the TP52 Celestial for brothers Will and Richard Howard.

“Hobart was tough, it was long, and obviously the back-and-forth surrounding the protest was emotionally draining,” Will Howard said. “At the start of this week we didn’t have a lot left in the tank but you still find it. We’re doing well, we’re improving, and going in the right direction.

“Today, we like breeze and our boat handling is generally sound. We made some adjustments to the rig between races and it helped a lot. Our strategy was to keep it simple, with minimal manoeuvres, and it worked – the bottom mark was a graveyard at times.”

IMEI also had a consistent day, with a third and fourth. It’s steered by David Gilmour, son of former match-racing champion Peter.

With injured skipper Tom Burton out for the regatta and reserve helm Jake Liddell unavailable, Knighton Group subbed in Australian Cherub champion Kris Fay to helm the boat … it’s third skipper in four days. They managed a ninth and 14th.

Belmont’s Bella Group, with Georgia Steenson at the helm, is the new outright leader for the female skipper trophy. Today, only she and Marilyn Sorensen on Shead were able to complete race 7. Lancelin continues to lead the Youth category from Tooheys Extra Dry.

Racing for the 13ft skiff fleet was abandoned due to the strong conditions.