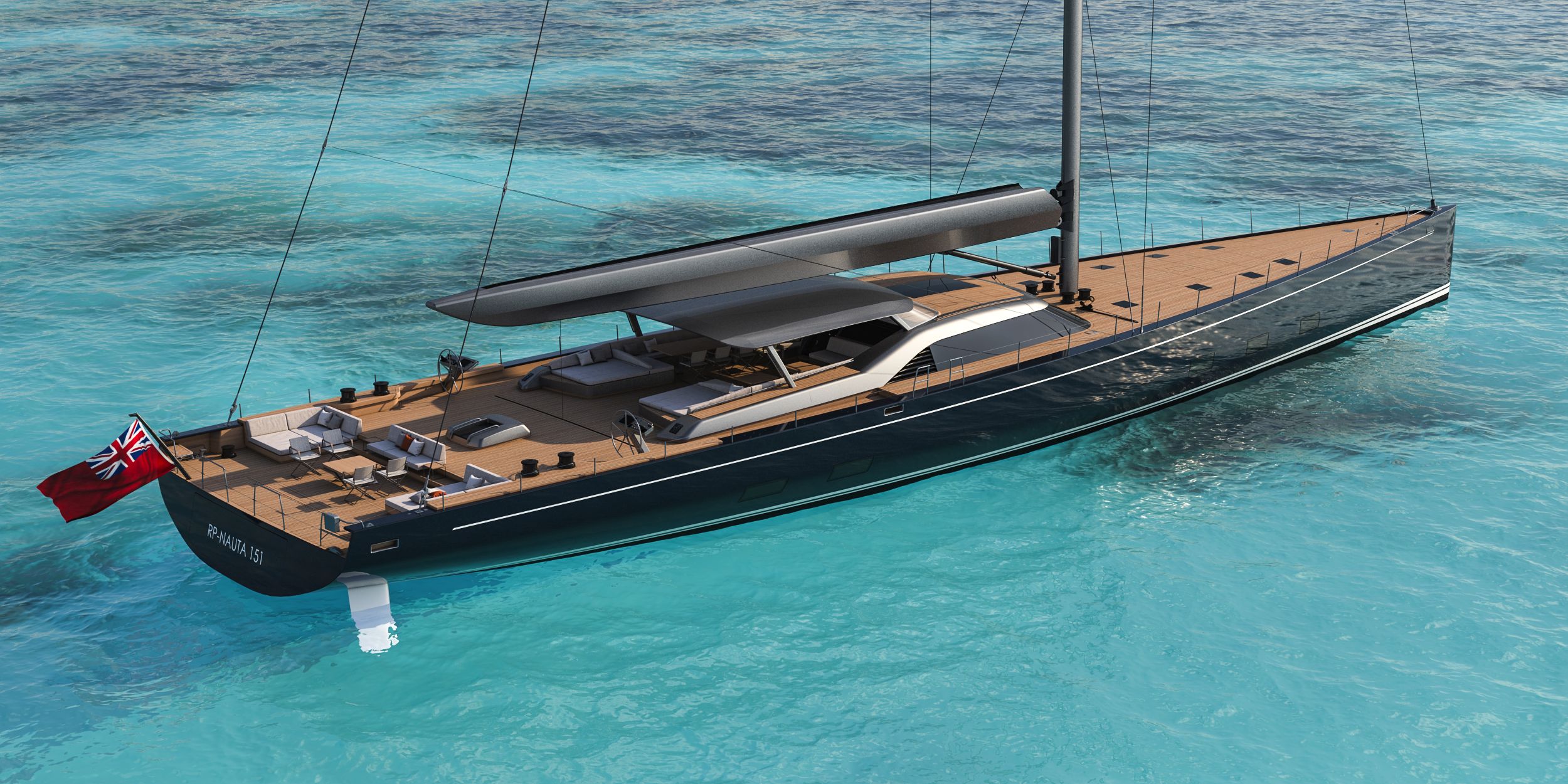 The Nauta151ft aluminium sloop is equally at home cruising or racing.

NAUTA 151ft is a one-off, bluewater performance sloop with general concept by Nauta Design, currently in build at the Royal Huisman shipyard.

“Combining comfort and safety to explore the world with an extremely lightweight yacht that was competitive in superyacht regattas wasn’t an easy task,” says Mario Pedol, co-founder of Nauta Design in Milan. “The owner wanted a solid, autonomous and safe yacht that was also efficient and modern with a powerful sail plan.”

The request came from a repeat client for whom Nauta had previously designed a 34-metre sailing yacht based on a broadly similar brief. This time the owner was ready to step up in size to 46 metres, but he wanted to retain the spirit of his former yacht, including the deckhouse design.

“The deckhouse is essential as it allows to look outside and see the sea while seated in the main salon,” says Massimo Gino, Nauta Design co-founder and partner.

Although carbon fibre construction was considered early on in the project, the design team eventually opted for an aluminium project that could still provide high performance but combined with robustness and acoustic comfort for extended bluewater sailing.

“I started thinking that an aluminium hull weighs 60-70% more than a carbon boat, but the weight of the hull and deck is only about 15% of the total weight of a sailing yacht,” says Pedol. “Our early intuition was that an aluminium construction sailing yacht could be much lighter than the existing aluminium fleet. Royal Huisman supported this vision with enthusiasm and accepted the challenging target of building a light displacement yacht. Extensive research work and calculations, confirmed our initial thought.”

To ensure optimal performance, longstanding Nauta partners Reichel/Pugh were selected by the client for the naval architecture. Reichel/Pugh designed and managed a Computational Fluid Dynamics (CFD) study bringing in America’s Cup CFD specialists Caponnetto Hueber and Giorgio Provinciali for the Velocity Prediction Program (VPP) performance analysis. This was a comprehensive hull design study to improve the sea-keeping and motion both motoring and sailing at various speeds and heel angles in different wave conditions, while also improving real and ORCsy rated performance.

Reichel/Pugh ultimately tested 12 models before development of the final hull shape. The VPP results indicate that in 10 knots of breeze the R/P-Nauta 151 will sail upwind under mainsail and jib with a boat speed of almost 13 knots and nearly 18 knots when reaching at a wind angle of 90° in a 15 knot breeze.

The exterior profile is defined by the unobtrusive deckhouse that blends gracefully with the austere sheer line. Royal Huisman has embraced Nauta’s bid to make the yacht as light as possible by blending aluminium with carbon composite construction. The deckhouse, guest cockpit and hardtop are all in carbon fibre by Rondal, Royal Huisman’s sister company, who are also building the Panamax carbon mast, boom and the yacht’s integrated sail handling system.

The exterior profile is defined by the unobtrusive deckhouse that blends gracefully with the austere sheer line. Royal Huisman have embraced Nauta’s bid to make the yacht as light as possible by blending aluminium with carbon composite construction. The deckhouse, guest cockpit and hardtop are all in carbon fibre by Rondal, Royal Huisman’s sister company, who are also building the Panamax carbon mast, boom and the yacht’s integrated sail handling system.

The wide transom of almost 10 metres includes a hinged section of the teak aft deck that folds out hydraulically in a single movement to rest on top of the beach platform, revealing an elegant staircase that can be raised for launching the crew tender. The aft section further includes two facing sun loungers with L-shaped backrests for viewing aft or athwartships when sailing, an aft facing sofa and a folding coffee table in front of it. The raised aft bulwarks can be used for seating. Two steps lead to the crew companion hatch and the double helm positions.

The guest cockpit is shaded by the carbon composite hardtop that can be removed in racing mode. There are another two sun loungers with adjustable backrests depending on the direction of heel, a full-size dining table to port and two coffee tables to starboard, both with sofa seating. Unusually, the curved windscreen has three opening sections to provide a through breeze into the cockpit.

The foredeck features a partially recessed carbon bay for the guest tender that converts into a cozy cockpit with hi-lo table and fitted cushions. Both the forward cockpit and the aft beach club can be covered by awnings supported on carbon fibre poles.

Below deck is a spacious dining area and comfortable lounge under the deckhouse, a full-beam master stateroom forward, three guest cabins, and the crew quarters and galley aft.

For easy handling, the sail operations are governed by weight optimized Rondal captive winches for sheets and mainsail halyard. The running backstays are tensioned by Cariboni Magic Trims on both sides and the synchronized retrievers have their own captive winches.

This automatic system allows to sail at all times, even in cruising mode, with the powerful square top mainsail up, to give the owner unforgettable sailing experience.