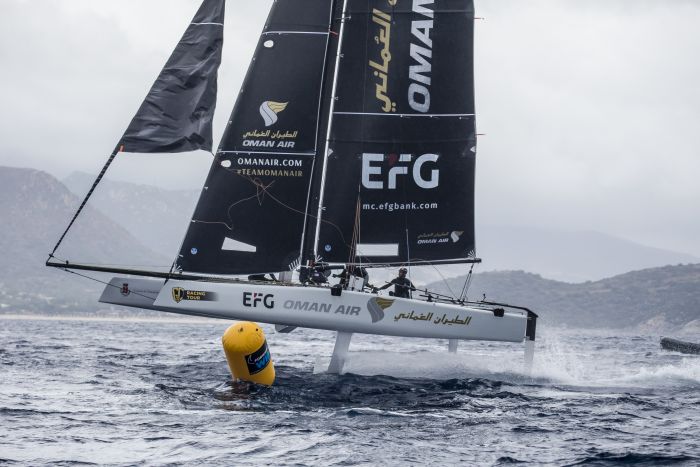 The GC32 Villasimius Cup has a worthy winner in Oman Air supported by EFG Private Bank Monaco, but her lead of nine points as the ten flying catamarans returned to Marina di Villasimius this afternoon was no reflection of the competition’s closeness.

Today the Omanis may once again have been lowest scorers, but Alinghi and INEOS Rebels UK were only one and two points behind. This situation would have been markedly different too had these two teams not been called OCS in the final race, in which they finished seventh and eighth respectively.

“We had a really good day of solid racing and we came back to within four points of Oman Air before the last race,” said Nicolas Charbonnier, the 470 Olympic bronze medallist, now Alinghi’s main trimmer/tactician.

The main feature of the day was the overcast sky and torrential rain combined with intense gusts due to the northerly wind blowing across mountainous southeast Sardinia. In one race, wind speed ranged from 9 to 23 knots. However it was a day of high adrenalin reaching starts.

Ben Ainslie’s INEOS Rebels UK got out of the blocks strongly in Villasimius’ uncharacteristic ‘British’ weather, relieving Jason Carroll’s Argo of the lead in race one to finish ahead of Alinghi and Oman Air, thereby setting the tone of the day.

“It was a funny old day – we were Code Zero up, down and struggling with jib choices every race,” commented Giles Scott, the INEOS Rebels UK tactician/main trimmer.

In fact INEOS Rebels UK was called OCS in the last two races, but in the penultimate one, when Red Bull Sailing Team was also penalised, both teams recovered superbly, finishing third and second respectively. “It is shame we didn’t finish it off with a good one,” continued Scott. “Otherwise we were really happy with the way we sailed. It was nip and tuck racing, against very good teams. It really justifies our decision to do this circuit.”

INEOS Rebels UK led for the first lap in today’s second race but was overhauled by Alinghi on the first beat, with Argo again doing well to take third. Alinghi won this race, and also race four after winning the start and leading into the reaching mark. “It was not easy to sail, but it was the same for everyone,” said Nicolas Charbonnier. “We had good fun, but we have a few little things we can still improve.”

After a strong start to the event, Franck Cammas and NORAUTO had a Saturday the Volvo Ocean Race and Route du Rhum winner would rather forget and a decidedly mixed Sunday, the French team’s bullets in the third and final races surrounded by deep results.

Cammas commented: “We had some good races, which means we have the necessary speed and the right boat handling to win, but we’re not consistent enough. We need to make some details better and avoid making mistakes. Today we started well twice, and that was when we did well. Our upwind starts are good enough, but we can do much better on the reaching starts.”

Adam Minoprio squelched ashore wet and shivering slightly, but otherwise delighted. He has previously won many GC32 Racing Tour events – even the very first back on Lake Traunsee in 2013, plus several when he helped NORAUTO win the GC32 title in 2016, but this was his first event as helm for Oman Air. “We are very pleased we managed to win against some very strong teams who have sailed a lot together. We’ve been very consistent and really pushed hard,” he said.

Of today’s competition Minoprio said: “It was another tough day. We were hoping the breeze would settle, but it turned out the rain clouds were putting big puffs and shifts on the course. There was a lot of changing gears between the J1 and J2 and wind shifts of about 60°. It was really unstable, so you had to get good starts, then keep an eye on the shifts, because people were going from the back to the front in all the trickiness.”

The Kiwi ex-Match Racing World Champion added that with their eight point lead going into today, they had sailed conservatively. “We wanted to make sure Ineos and Alinghi didn’t get much leverage on us, but we only stuck to them like glue in the last two races.”

Erik Maris and Zoulou had a mixed week, but did enough to finish four points ahead of Jason Carroll's Argo to claim the GC32 Villasimius Cup Owner Driver Championship.

This event was the first on the GC32 Racing Tour for Black Star Sailing Team from Switzerland. Despite finishing at the bottom of the leaderboard, owner Christian Zuerrer said he enjoyed it immensely: “We have been on a steep learning curve. We came closer together as a team. We have been able to play with the big guys and so far we are happy. We are little bit disappointed that we lost, but it was a great event.”

Second event of the 2019 GC32 Racing Tour will be the GC32 World Championship, taking place in Lagos, Portugal over 26-30 June.

The GC32 Racing Tour is supported by Marinepool, WIP Forward and GAC Pindar.