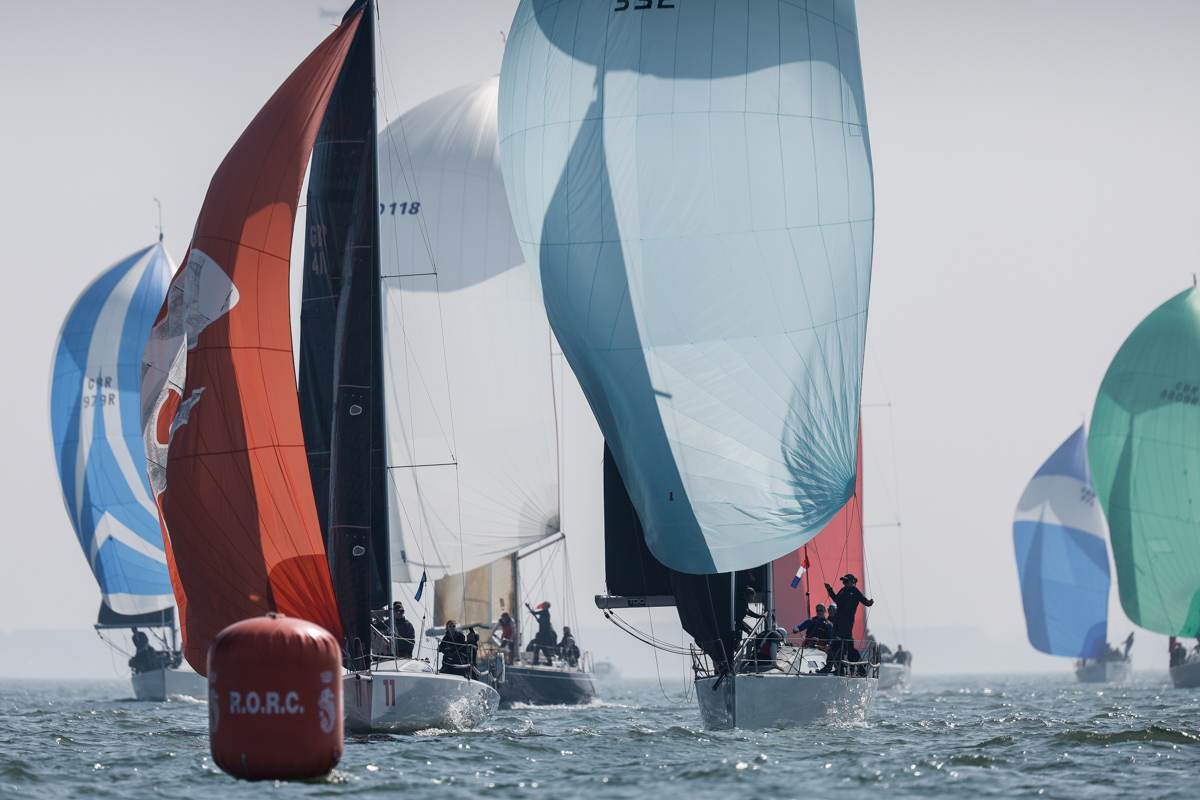 Cowes: The Easter treats continued for close to 300 hundred sailors taking part in the RORC Easter Challenge as fabulous sailing conditions continued in the Solent for Day 2 of the regatta when some boats moved up the board and others dropped away.

The RORC Race Committee, led by Steve Cole, with Paul Jackson as PRO, organised two courses, giving the fleet a mixture of windward leeward races and round the cans races. Three races were completed for all three IRC Classes in a south easterly breeze of 10 to 16 knots, with beautiful spring sunshine providing superb racing.

A race debrief was held at the RORC Cowes Clubhouse with more expert advice from Andrew ‘Dog’ Palfrey and the coaching team, and included drone footage from North Sails of starts, mark roundings and boat handling. Those unable to attend watched the presentation via Zoom with documents, videos and pictures also uploaded to the Cloud.

“What a fantastic job by the RORC Race Committee; a great mixture of courses, which is what you want for a training regatta,” Palfrey said. “We’ve seen some solid improvements since the first day. There’s still a way to go, to be consistently well-sailed, but every team has made ground towards that goal.”

IRC One
Intense racing in the big boat class saw Ian Atkins’ GP42 Dark N Stormy score two more bullets to take a firm grip on the class, but it was far from easy. In Race 5, a well-executed gybe by Dark N Stormy could well have made the difference, with them taking the win by just one second after IRC time correction from Dutch Ker 46 Van Uden.

“Really great organisation today by the RORC, mixing up the windward leeward races with some well thought-out round the cans courses,” Atkins commented.

“All of the boats in IRC One are almost the same, but we all have our own areas of advantage. Usually, we are not the first to the top mark, so we have definitely put the gybe set into our armoury to get that separation. Brilliant coaching on the water makes this event outstanding at the start of any campaign.”

“We love this regatta,” Henry Foster, skipper of Fujitsu British Soldier said. “The debriefs are really useful because we have a lot of crew turbulence due to Army commitments, so the learnings from this regatta are invaluable for the new crew who have joined us this weekend.

“I have been doing this regatta for 15 years and what RORC and North Sails provide is really good for setting up the boat for the season. This is a great regatta and we really enjoy it. We have been working on our upwind settings and we got a lot of good feedback from Andrew Palfrey.

Andrew McIrvine’s Ker 39, La Réponse, is crewed by friends that have known each other for many years. Team Larry, as they are known, will be competing at two bucket-list events this year. They are chartering a boat for Antigua Sailing Week at the end of the month, then in July, La Réponse will be racing at Volvo Cork Week, which is also the Royal Cork Yacht Club’s 300th birthday.

“Larry’s back having fun. We are a bunch of friends with no professionals. The racing’s great, the craic’s great, and I am loving it,” McIrvine said.

IRC Three
Quarter Tonner Bullit, skippered by Julian Metherell, retains the class lead, but failed to keep up their perfect scoreline from the first day. Lena Having’s Corby 33, Mrs Freckles, had a great day at the races, including winning Race 5 to retain second place.

The J/109 Mojo Risin’, skippered by Rob Cotterill, also had a great day, scoring two podium race finishes to move up to third in class.

Elan 450, Emily of Cowes, is skippered by the highly experienced Richard Oswald, but for the RORC Easter Regatta a new crew has been put together to start a campaign by RORC member Geoff Johns.

“Most of the crew are new to keelboat racing, having sailed dinghies on reservoirs in the past. Richard Oswald suggested we should come to the RORC Easter Challenge and we are very glad that we have,” Johns said.

“The racing is extremely well-organised and the debriefs are an invaluable way for us to learn. Also, having on-the-water coaching gives us expert advice to improve our performance too.”