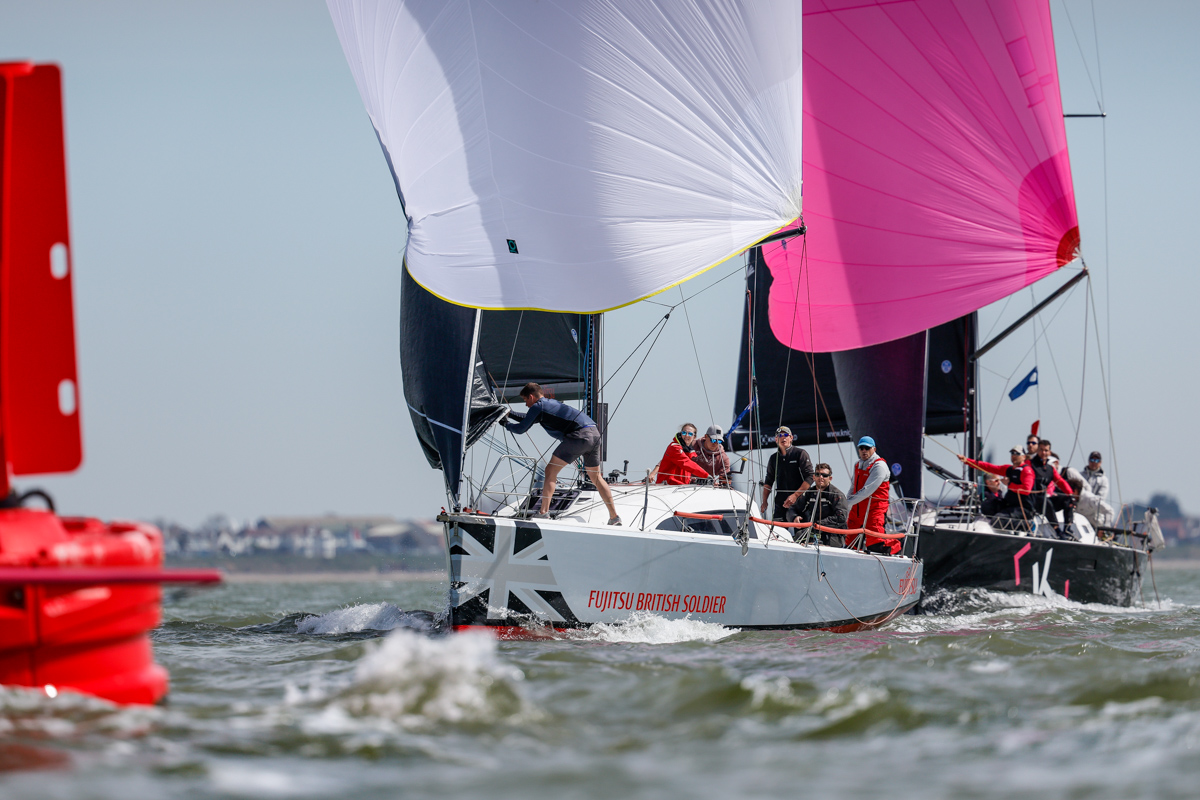 “A fantastic regatta and it has been great to see so many teams competing in fine weather and looking forward to a busy season of racing with the Royal Ocean Racing Club,” commented James Neville. “A big ‘Thank You’ to Steve Cole and his race team, as well as the coaches led by Dog Palfrey, who have done an absolutely cracking job. I know I speak for so many teams when I say that the North Sails debriefs and help out on the water has been really appreciated.”

The Solent delivered magnificent weather every day of the RORC Easter Challenge, but Mother Nature saved the best until last. Easter Sunday was blessed with a solid south-easterly, building during the day along with the tide. With outside assistance allowed during the regatta, a RORC coaching team supported by North Sails, was led by Andrew ‘Dog’ Palfrey.

All competitors were offered coaching during racing, plus the daily video debriefs and online content provided an opportunity to take-in the lessons learnt. At the Saturday debrief, one of Dog Palfrey’s main points was the start routine and the final day’s racing proved that the teams were listening. Two races were held for all IRC classes with close to blanket starts achieved by the competitors.

“More of the same please,” commented Dark N Stormy’s Ian Atkins. “I don’t think I have ever done this regatta when it has felt like we are sailing in summer, with sea breeze and temperature in the high teens. We just had a blast. I wish it would go on for a few more days. Dark N Stormy has a hardcore of my previous team and if the rest of the season is like this, we are going to have a lot of fun!”

Ian Atkins has identified a big group of IRC boats of a similar ilk in the Solent. “These boats are fantastic fun to sail, high performance re-defined and we think there are 12-15 boats that are like Dark N Stormy. We would love them to come and compete in a series using existing events. We have five events in mind, mainly with the RORC and also Cowes Week, and a dedicated event later in the year, with a big party at the end. We know those boats are out there and we have sent invitations to boats ranging from TP52s to IC37S.”

Ian Walker, double Olympic Medallist and Volvo Ocean Race winning skipper was tactician for Dark N Stormy and commented: “The coaching team were really helpful, we got lots of good input and the race team did a great job with the course.

“There was no hanging around; I can’t fault any of it. The thing I noticed the most was that for us it was getting harder and harder to do well in the races; you could see the standard going up in the fleet, which was the aim of the regatta. Helped by the weather, you couldn’t have had a better weekend of racing.”

The Army Sailing Association’s Sun Fast 3600 Fujitsu British Soldier, skippered by Henry Foster won the class in the very last race of the regatta. J/112 Happy Daize raced by Team Knight Build, was a gallant second. VME Racing’s Mills 39 Zero II, skippered by James Gair finished the regatta in style, taking a second and first place in the final two races to snatch the last podium position. The intensity in the class was exemplified by two race ties after time correction between Andrew McIrvine’s Ker 39 La Réponse and Happy Daize.

Happy Daize skipper James Chalmers commented: “I have not been at the Easter Challenge for many years and we are really glad that we have competed this year. The competition on the water, especially with British Soldier and La Réponse, has been excellent. Right up to the last race we were crossing each other and that sort of competition increases performance.

“A big ‘Thank You’ to the RORC and the coaching team for organising a superb regatta. Our big regatta this year will be Cork Week in July and we have made a huge amount of progress for that event at the RORC Easter Challenge.”

Lena Having’s Corby 33 Mrs Freckles scored a 1-2 on the last day to win the class. Lena and her partner Eivind come from Gothenburg, Sweden and Mrs Freckles was sailing with a majority female crew, including two from the Magenta Project: “Although I have raced in the Solent before, I think the biggest area we need to improve on is learning about the strong tides, which we do not have in Gothenburg.

“This year we plan to compete at a number of events in the Solent, both double-handed with Elvind and also with a full crew. A Swedish all-women’s team will be coming out for the Women’s Open Keelboat Championship this summer. While we love to sail in Sweden, you really have to come to the Solent for really competitive racing.”

Harry J. Heijst’s S&S 41 Winsome finished the regatta in style, taking the race win in the very last race to finish second, by a single point in IRC Three. Winsome was also awarded the Prix D’Elegance Award. Quarter Tonner Bullit, skippered by Julian Metherell was unable to race on the final day. Having led the regatta from the very first race, Bullit still placed third on countback from Rob Cotterill’s J/109 Mojo Risin’.

Racing with the Royal Ocean Racing Club continues with the first European-based offshore race of the 2022 RORC Season’s Points Championship. The Cervantes Trophy Race will be a cross-Channel dash to Le Havre, starting from the Royal Yacht Squadron Line, Cowes on Saturday 30 April. The next inshore regatta for the RORC will be the Vice Admiral’s Cup, with racing in the Solent for primarily one-design classes from Friday 20 to Sunday 22 May.

For more information go to: www.rorc.org