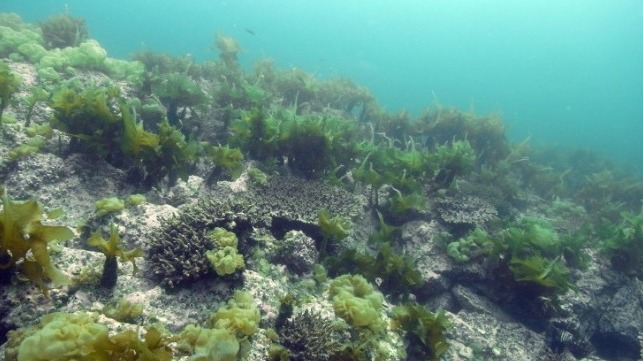 According to a new study published July 4 in the journal Marine Ecology Progress, the distribution of living coral – the organisms responsible for reef formation – appears to be shifting to higher latitudes as temperatures rise in equatorial waters.

A multinational team of researchers led by Nichole Price of the University of Maine compiled a comprehensive database of reef studies reaching back to 1974. Based on the available data for sites as far north (and south) as 35 degrees of latitude, they determined that the number of young corals has fallen by 85 percent on tropical reefs and risen by about the same amount on subtropical reefs over the course of the past four decades.

The composition of the new far-flung reefs may be different from the existing tropical formations, and it depends in part upon the maximum time that each coral species' larvae can survive while drifting on ocean currents. It is also as yet unknown whether related species, like the algae that functions cooperatively with coral larvae, will also migrate to new locations. More research will be required to determine the exact makeup of the new sites.

“So many questions remain about which species are and are not making it to these new locations, and we don’t yet know the fate of these young corals over longer time frames,” Price said in a statement released by the University of Washington. “The changes we are seeing in coral reef ecosystems are mind-boggling, and we need to work hard to document how these systems work and learn what we can do to save them before it’s too late.”

The researchers said that the findings show new hope for endangered corals as climate change progresses and tropical reefs decline. It also adds new complexity to the narrative of reef habitat degradation. “We are seeing ecosystems transition to new blends of species that have never coexisted, and it’s not yet clear how long it takes for these systems to reach equilibrium,” said co-author Satoshi Mitarai, an associate professor at Okinawa Institute of Science and Technology Graduate University. “The lines are really starting to blur about what a native species is, and when ecosystems are functioning or falling apart.”