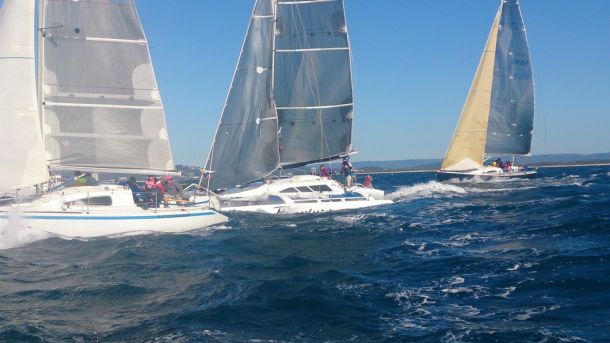 Liquidator in the Lead at SCOR. Photo SCYC.

It was a great day sailing with some exciting speeds set by all boats in particular Rum Raider, a Granger Raider.  Rum Raider skippered by Novak and Jo Thompson and crewed by their two boys provided a fantastic spectacle as it flew around the course.  SCOR/IRC competitors Quest and Hasta La Vista reported clocking some of their best speeds.

Drinks at The Yacht Club afterwards provided plenty of opportunity for competitors to tell their stories, share jokes and advice and sledge their fellow competitors.  It was a great wrap up to the week of the 2015 IRC Qld State Titles and SCOR.

Winners of SCOR 2015 were presented with trophies and prizes generously donated by major sponsors North Sails and RAILBLAZA.  The winners of each division were:

The Sunshine Coast Yacht Club is already planning next year’s SCOR due to the success of the past two year’s competition.  So watch this space!