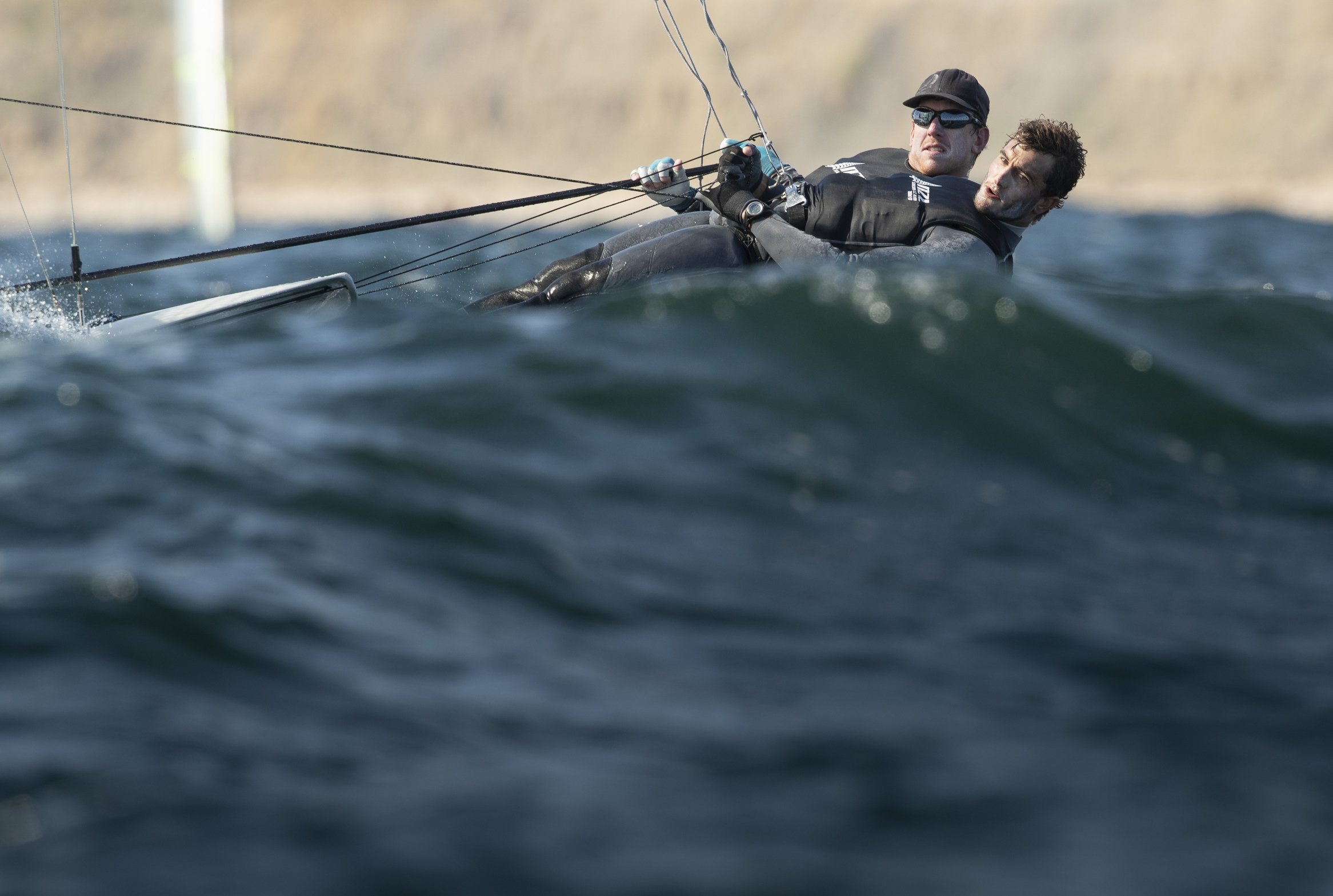 Nacra 17: Tita and Banti Back on Top

Ruggero Tita and Caterina Banti (ITA) showed the fleet they remain the favorites today as the 2019 Volvo 49er, 49erFX and Nacra 17 European Championships opened. The defending World Champions and two time defending European Champions strung together three bullets that echoed their performances in 2018.

The top teams separated themselves with blistering downwind boatspeed. Using a stealthy combination of coordination, feel, balance and guts, the best Nacra 17 teams worked to get into a foiling rhythm that separated the top of the fleet from the rest.

Long time campaigner from Denmark, Alan Norregaard commented that they really improved in handling the waves as the day went on. It was, after all, the first time he and fellow Bronze medalist Katja Iversen had sailed in waves so large in the Nacra 17, having only recently started their campaign together. They managed a 9, 10, 9, and left the top places to those with more experience.

The waves sifted the skill well today, with most teams ‘jumping’ or ‘skipping’ at least a few times on every downwind. Those teams that could manage minimize the interruptions made large gains and scored well. Teams nearer the back of the fleet resorted to low riding in order to survive the conditions.

Vilma Bobeck and Malin Tengstrom (SWE) became contenders today. The young Swedes, who won the Junior World Championship in 2018, today showed how in heavy weather, they are right in line with the World’s best.

“We suspected we could perform like this, as we’d had some good training sessions, but taking two wins and then sailing through the fleet to recover to a third is beyond our expectations,” commented the plucky helm Bobeck.

The duo started well in the first two races, and couldn’t be reeled in, taking wire-to-wire victories in both races. In the final race of the day, they started poorly but moved up throughout the race passing on every leg.

Bobeck, the helm, is a towering figure, almost the tallest sailor in the fleet. Together with the average sized Tengstrom the duo were the only 49erFX female team to compete with the top two male teams at the 2018 Junior Worlds, which was a very windy regatta in Marseille, France. This season they have finished between 8th and 21st through Miami, Vilamoura, Palma, and Genoa, but almost all of the racing this season has been in light winds. Today, they got their time to shine.

Among the ten teams chasing them are the Olympic Champions, three other World Champions and two further European Champions. Holding their leading position won’t be easy, but today was a great way for a young team to make a mark.

49er Men: Kiwis leading the charge around a square course

Logan Dunning Beck and Oscar Gunn from New Zealand started with a 4th followed by a trio of bullets in their third of the qualifying fleet, which totals 96 international entries from nations as diverse as Oman and India. After a discard, the Kiwis top the leaderboard with 3 points, one point ahead of their fellow Kiwis and training partners, Pete Burling and Blair Tuke, returning to the same waters where they won an Olympic silver medal at London 2012 seven years ago.

Dunning Beck said the key to success was pretty straightforward – get a good start, do minimum tacks upwind, one gybe downwind. Sailing a square course, with one tack and one gybe, sounds easy enough except that everyone’s fighting for to do the same, simple thing. Which makes it not so simple. Maybe it’s the strong training program back in the New Zealand summer that’s paying dividends now for the Kiwis.

Still, it’s early days in the regatta, and on equal points with Burling and Tuke are Spain’s Diego Botin and Iago Lopez.

It was a pretty impressive day for the Phillips brothers from Australia, particularly in the first three races with scores of 1,2,1 before a less memorable 15th in the last race of the afternoon. “Nice to be back in Weymouth,” said Sam, crewing for brother Will. “You don’t miss many days sailing in Weymouth, it’s nearly always good here.” The Phillips missed most of the 2018 season after Sam broke his foot in a bone-crunching nose-dive at 35 knots in the now-defunct SuperFoiler circuit which lit up Australia just over a year ago. The Princess Sofia Trophy in Palma a few weeks ago was their first competitive 49er outing together in a year, so to find themselves near the front of this world-class fleet after the first day is a welcome return to form for the brothers.

Just behind the Phillips brothers are the Rio 2016 bronze medalists from Germany, Erik Heil and Thomas Ploessel. Just a week ago the 2017 European Champions, Dylan Fletcher and Stu Bithell, were racing at 47 knots across San Francisco Bay in a SailGP F50 catamaran, but the Brits are pleased to be back on home waters with a “boring” opening day, according to Fletcher, which puts them in sixth overall. “Nothing special, just solid, which is fine for day one,” he said.

Weymouth, UK delivered conditions that some competitors described as Tokyo-Lite. In other words, the sunny skies and 16-knot easterly winds on a challenging but manageable swell were a softer version of what competitors might expect if Enoshima delivers some of the big Pacific surf conditions that could arrive for next year’s Olympic Games. Today’s beautiful conditions come as a welcome relief from a run of light-airs regattas so far in 2019.

Weymouth and the Brits put on a Race Management Clinic

The sailing was superb to start this championship, at 16 knots and modest waves. As impressive was the organization and logistical capabilities of the hosts, the Royal Yachting Association and their venue partners the WPNSA.
A total of 24 races across four course areas started and finished on time. 211 boats went through the cavernous measurement hangar with an army of skilled volunteers managing the processes.

In 49er and Nacra 17 class racing, we aim to ensure qualifying is as fair as possible, by running the fleets simultaneously so that conditions are as similar as possible. When the forecast crystallized they responded to a less typical wind direction to move the fourth course area to a better location, thereby living up to this principle and delivering the very best sporting platform for the sailors.

This tour de force of sailing skill was honed in the lead up to the London 2012 Olympic regatta, and the legacy it has left here is obvious.