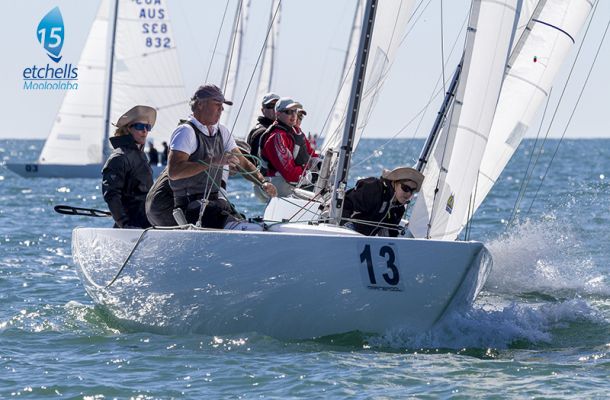 Day one of the Marinepool Etchells Australasian Winter Championship was complicated with constant wind shifts and pressure changes challenging even the most experienced in the 44-boat fleet.

Leading the regatta overall after three races is Sydney’s Jeanne-Claude Strong, one of two women skippers in fleet. Strong, tactician and Olympian Neville Wittey, crew Marcus Burke and Tiana Wittey surprised some among the fleet with their dominance in the predominantly light to moderate south-westerly.  They won both the first and second races before finding themselves in seventh place after they missed a critical call.

“Today was really perfect. It’s what we expect Mooloolaba to be every year with lovely sunshine and nice breeze, although it was very shifty. My guys did a really good job picking the shifts while I tried to keep the boat going as fast as I could. I would really thank the Wilson brothers for managing a fantastic race and the race committee and they volunteers. They did a great job,” Strong said.

In Race 3 Strong led off the start line and was around the top mark first time still in the lead. Then something went wrong. “We should have gybed earlier. We should have noticed the other guys gybing. We basically gybed too late. We lost all our positions about then. We then kept it like that for the rest of the race and tried to improve our lot as we went along, but we couldn’t quite manage it,” Strong added.

Tied for first place overall, but placing second on a count back, is Miles with his crew of Grant Cowle and James Mayo. This is a new combination on Miles’ boat so he is quite pleased that they not only sailed well together in their first major event, but also placed consistently in the tricky conditions. Their scorecard today was 3/4/2.

“We started well at the right end of the line for most of the starts,” Miles said.  He was surprised in the third race that he finished equally across the line with Garaty. “We thought we had dropped him.”

Miles was one skipper not surprised by Strong and her team’s performance today. “She has been sailing well and putting in a lot of hard work. She won the Goblets on the (Sydney) harbour. She has a good team that has been sailing together for a long time and they have been doing a lot of travelling. I am not surprised to see her there at all,” Miles added.

In third place overall is McNeill who has returned to form with a tidy scorecard of 7/5/1.

For the rest of the place it was all over the shop. There were few that delivered consistent results as they battled with the constant wind shifts on the smooth ocean out the front of Mooloolaba Beach. Melbourne’s Chris Hampton was one to feel the bite. He roller-coasted from 15th to 2nd and then to 12th to place fourth overall.

North Sails Michael Coxon was another one that struggled to find his way. He started with a second place, but then followed with 15th and 17th to finish fifth overall.

The defending champion team, Matthew Chew, had a shocking day. He finished 8th in Race 1, was OCS in Race 2 then returned and continued racing to finish 21st in Race 2. Then in Race 3 he was in the start area early, incurred a U Flag penalty and finished in 44th. He is now in 26th overall.

Another high-profile team that didn’t have a good day was Hong Kong’s Mark Thornburrow, the 2013 Australasians champion. Their scorecard was 17/18/8.

Racing is scheduled to continue tomorrow. The race committee have called for an earlier start time of 10am. Two races are scheduled with hopes they can be completed before the forecasted heavy mid-afternoon wind builds to the high 20s. If the race committee can get in one or more races, then a drop will come into play, which after today’s results, will be very welcome for several of the current top 10.

Both Strong and Miles are looking forward tomorrow’s more wind. “We look forward to it. We just have more fun in the heavier wind,” Miles said.