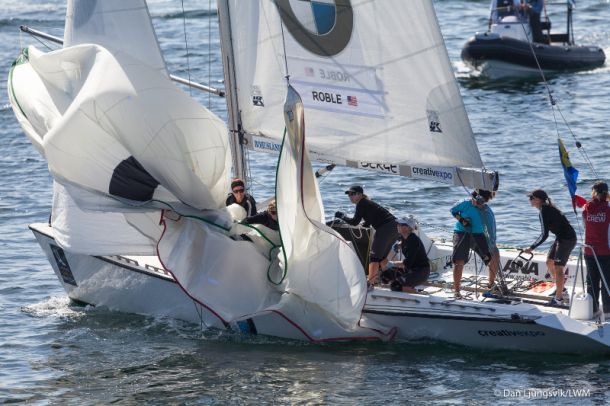 World #4 Stephanie Roble of the USA didn’t only win the round-robin stage of the Lysekil Women’s Match, but she and her Epic Racing Team also made it in a very stylish way. 11 wins and no losses is certainly a result that speaks for itself.

“Our secret is the team work,” Roble reveals, explaining: “The girls are focusing and doing their jobs really well. That makes it a whole lot easier to be at the helm.”

When the round-robin stage of the Lysekil Women’s Match, the 2nd event out of four on the 2015 WIM Series, concluded Thursday, Stephanie Roble was alone at the top with all her matches won. But when racing World #2, local hope Anna östling, it was really close to a defeat for the American match-racing ace. The spectator crowds on the cliffs of Släggö Island got a truly breath-taking show, practically within arm’s reach.

“In the prestart we actually put Stephanie up on the cliffs,” östling laughs, admitting that that particular move in the game was something she had dreamed of performing.

Not surprisingly, Roble wasn’t as excited as the Swede over the situation, being penalized by the umpires for it. But she fought back, and managed to get off the starting line with a narrow lead.

“We focused on extending and took the penalty at the finish. We barely made it, it was very close,” Roble concludes.

Despite her loss against Roble, östling also made it to the quarters, finishing third in the round-robin behind runner-up and World #1 Camilla Ulrikkeholm Klinkby of Denmark.

French Anne-Claire Le Berre had a tough day in the beautiful archipelago of Western Sweden, posting only two wins but four losses. With her 4,5 points she barely made it to the quarterfinals.

“Today wasn’t a very good day for us. We made too many small mistakes and didn’t do very good starts either. That made everything more difficult for us,” she comments, yet pleased to be in the quarters. “Tomorrow is a new stage, and we’re really happy to be in.”


Klaartje Zuiderbaan of The Netherlands used the round-robin to get her partly new team together, finishing on fourth place and a quarterfinal slot. “Sailing the quarterfinals is just the first goal. We’re still learning, and every race is better than the one before. I hope that will take us further in the regatta,” the experienced helmsman says.

Lysekil Women’s Match continues Friday with quarterfinals, and then Saturday with semi finals and final.

Round-robin results in Lysekil Women’s Match, the 2nd stage of the 2015 WIM Series