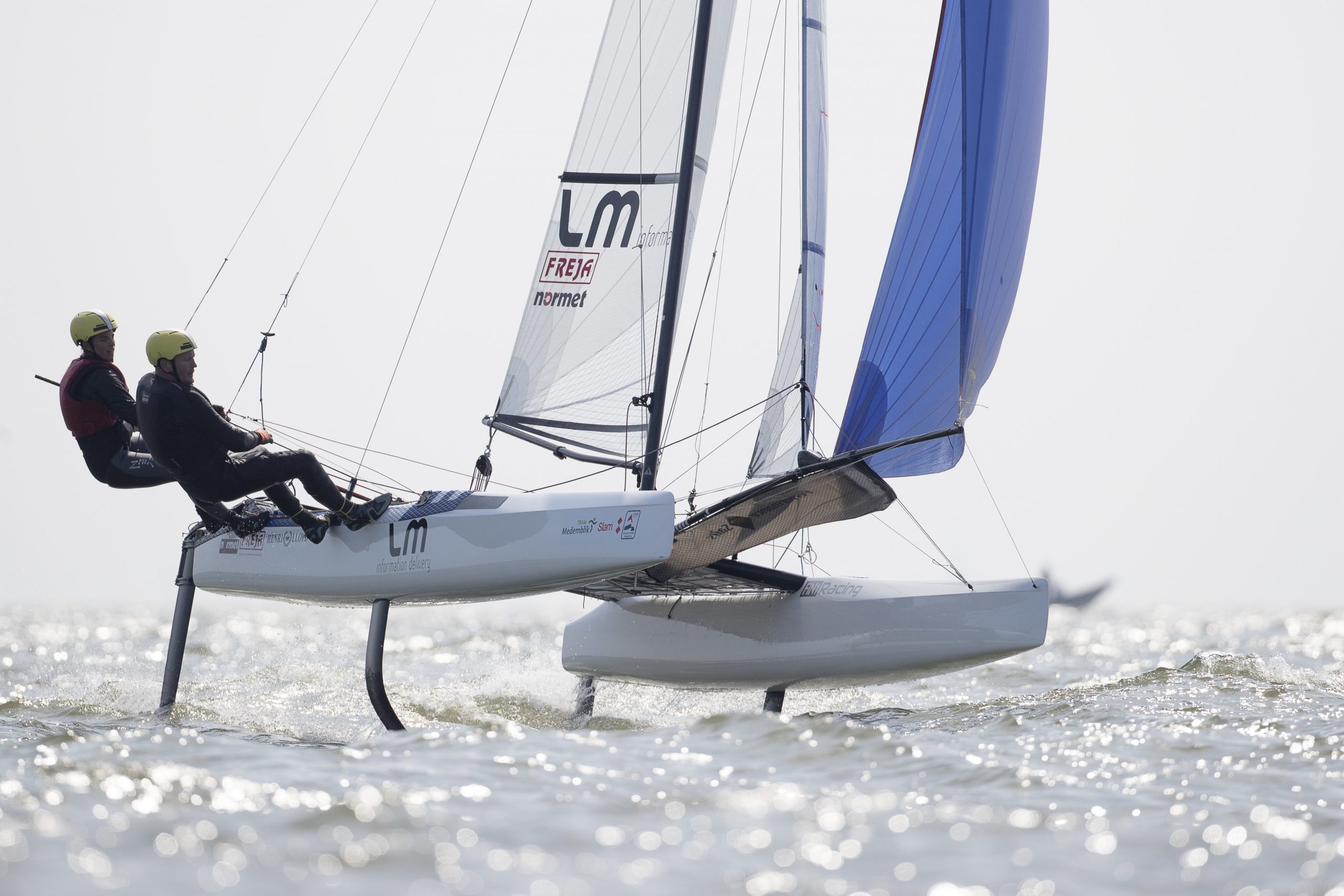 May 24th 2018, the Netherlands – Three days of racing are done at the 34st Medemblik Regatta. The competition is strong and competitors are working hard to claim their medal race spot. There is one more day of qualifications left, however, some of the sailors are already looking at their chances for the medal races.

“We've had a great day today”, reacts Remco de Goederen, Principal Race Officer, to this windy and sunny day. “We've only had to postpone the RS:X Women and U19 for half an hour, due to a minor wind dip before their races.”

Maciej Kluszcyński stays in the lead
The RS:X men started racing with good conditions in the morning. The wind was a bit shifty tells Maciej Kluszcńnski (POL): “Today looked really good, but when we got out on the water the wind started dropping and shifting. With these kind of conditions you have to keep focussed, during the start and while racing.” Kluszcyński is leading the fleet after three days of racing. British Kieran Holmes-Martin is slowly catching up with him, Yoav Cohen (ISR) is in third place.

Dutch favorite Dorian van Rijsselberge is trying to get back into the rhythm: “It's becoming an exhausting week here. We have difficult conditions, and I'm starting to feel that I haven't been training a lot this season.”

French RS:XU19 unbeatable
In the RS:X youth the French Fabien Pianazza is winning every race this week, he could discard his only second place. “This event has been good so far for me. Though the wind conditions make it difficult and my teammate Tom Garandeau is a really strong competitor.” Garandeau is in second place with a difference of 7 points. Pianazza is aiming to compete in the Olympic Games in 2024. “I’ll be in the senior fleet next year. From there I hope to work towards a qualification for the Olympics in Paris, in 2024. The Olympic Games in my own country, that's a great goal!”

Broken board for De Geus
In RS:X Women Lilian de Geus is aiming for the podium. Today she hoped to bring something more, but a broken board stopped her from this: “With everything going on before my first race, I’ve had a good day. One of the other windsurfers made a power gybe and didn’t see me, I had to start the race with a broken board. But I did ok, finished 4th. I was hoping to create a bigger distance from the other competitors today. Maybe I could have raced a better first race, but I’m still happy with my racing.”

Nacra 17 finally a chance to foil
The wind conditions in the morning got the Nacra 17 sailors excited to go out on the water. Finish Sinem Kurtbay, racing with Janne Jarvinem: “It’s sunny, it’s windy, we are in for a great day. Today we are going to Foil, Fly and Crash. But above all, have a lot of fun!” The duo ended up in 13th, 17th and 5th place today.

Close racing in 49er and 49erFX
Lucas Rual and Emile Amoros (FRA) are leading the fleet in the 49er. They could discard their first race of the day, which they finished in 13th place. Argentinian Yago and Klaus Lange are in a steady second place and Danish Jonas Warrer with Jakob Precht in third place.

In the 49erFX it's going to be a battle between Dutch Annemiek Bekkering with Annette Duetz and British Charlotte Dobson with Saskia Tidey. The Dutch duo is leading with 16 points, two points behind is the British team.

Happy sailors in Laser classes
Comfortable in the lead is Elliot Hanssen. However he can’t get too comfy since Le pen (FRA) is breathing down his neck after two strong 2nd place finishes today. Dutch Niels Broekhuizen is in third place at the moment, he is a happy sailor: “To sail in front with the seniors is good for my experience.”

The light winds make racing for the Laser Radial sailors tricky. Dutchies Daphne van der Vaart and Maxime Jonker are in first and second place. Croatian Elena Vorobeva is in third place with the same amount of points as number 4 Magdalena Kwasna (POL). Jonker: “It was a difficult day today, but I've had the chance to practice some tactics. In the fleet it's really close racing, so it's al coming down to the medal races Saturday.”