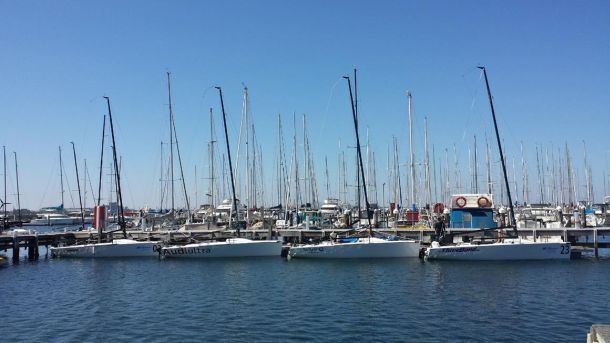 Ready to Roll at Geelong for 2014 Festival of Sails

The Victorian Government has joined the City of Greater Geelong and the Royal Geelong Yacht Club in providing funding for the development of a formal business case and masterplan for a Geelong Waterfront Safe Harbour– which could herald the biggest redevelopment of the Geelong waterfront for more than two decades.

The potential redevelopment and upgrade of the precinct would be a major boost for the Royal Geelong Yacht Club (RGYC) and its annual hallmark event, the Festival of Sails.

Today, the Victorian Minister for Sport, Tourism and Major Events, John Eren visited the RGYC to announce that funding had been secured – and consultants had been appointed – to undertake the ‘Geelong Waterfront -Safe Harbour Precinct: Major Events and Public Access Infrastructure Development Project, Business Case and Precinct Master Plan’.

Minister Eren said the appointment of the consultants was a significant step forward for the Project.

“The Geelong waterfront presents a unique opportunity for further redevelopment and growth – and that means jobs and a stronger region,” he said.

The Minister made today’s announcements at the official launch of the 2016 Festival of Sails.

City of Greater Geelong Mayor, Cr Darryn Lyons also welcomed the business case announcement which he said would take the City to the next level.

“The waterfront is a key focus for Geelong and maximising the potential we have on our doorstep is good for tourism, business and the people of Geelong.”

A key development target for the project is the installation of a wave attenuator to provide protection from damaging northerly and north-westerly weather conditions.

According to the RGYC Commodore and Chairman of the Festival of Sails, Chris Williams, a wave attenuator is a cost effective solution to providing safe harbour for a wide range of vessels.

“It means that Geelong will have extra, safe berthing space which is a huge benefit for visiting vessels for events and Geelong as a destination. It also means we can continue to sustain and importantly, grow the offerings of the Festival of Sails which provides a significant economic benefit for Geelong,” he said.

“It really is a critical and cost effective solution to a problem which is limiting our capacity to move forward and attract more national and world championship events such as the 2017 Vipers.”

Funding for the business case has been provided by Regional Development Victoria, Sport and Recreation Victoria, the City of Greater Geelong and the Royal Geelong Yacht Club and is supported by Tourism Victoria and Parks Victoria

It is expected the business case will be completed by the end of October 2015.