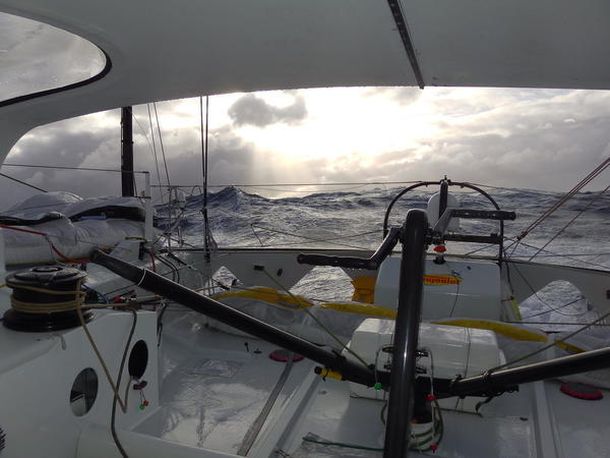 On auto-pilot in the Southern Ocean. Photo Barcelona World Race

Manoeuvres completed for the meantime, Barcelona World Race leaders Cheminées Poujoulat are making high speeds again as they sprint in a straight line east for their final miles in the South Indian Ocean. Bernard Stamm and Jean Le Cam should pass into the Pacific late on Monday night or early Tuesday morning.

While they had lost just a few small miles to their persistent rivals on Neutrogena until yesterday, the margin is climbing again for smoking Cheminées Poujoulat as their average speeds rose back above 20kts this Sunday afternoon. The Swiss-French pair who have lead since the demise of Hugo Boss on 14th January have built their lead up to 208 miles this afternoon ahead of Neutrogena.

The leading duo are now starting to experience strengthening winds and bigger seas as they come under the increasing influence of a big low pressure behind them which should provide them a fast slingshot ride into the Pacific.  Cheminées Poujoulat are straight lining east around 48 degrees south. Positioning relative to each other is now reversed as Neutrogena are now on a course about 100 miles to the north of Cheminées Poujoulat.

Co-skipper José Muñoz reaffirmed that the strategy aboard Neutrogena reflects their routing decisions and takes little account of what their immediate rivals are doing. Altadill and Muñoz are well rested and ready for the next spell of intense, hard driving Southern Oceans weather.
“We have always been doing our own race, obviously watching what is around us: the one in front, those who are behind, different conditions, and always looking four or five days ahead so we dont get ourselves too little or too much wind”.  Muñoz said.

Conditions have become more favourable at the front of the fleet for high speed reaching and so too in the lower rankings, Spirit of Hungary and One Planet One Ocean are now both reaching eastwards, parallel to the Antarctic Exclusion Zone.  After battling upwind in tough conditions for what seemed like days, Nandor Fa and Conrad Colman reported today that they are relieved to be back t o Southern Ocean 'brochure' conditions, making good speeds in the right direction.

The third podium place is still under the same kind of dispute as there is over first and second. Renault Captur in fourth and GAES Centros Auditivos who have also been third since Hugo Boss lost her rig and previously fourth since the Med, have 240 miles separating each other. Seb Audigane and Jorge Riechers on Renault Captur have been quicker, eroding miles from Anna Corbella and Gerard Marín.

The Sunday crisis is Conrad Colman and Nandor Fa's. They share a problem with perhaps hundreds of consumers around the world as the charger for their iPad is broken. But for them 1400 miles from Cape Town and 3100 miles from Perth, Western Australia, there are no fast track 24hr deliveries and, for the meantime, no solution. Like their forebears hundreds of years ago, there are no more e-books and e-entertainment:

Colman reported today:
” We measure our progress by dots on a screen and won’t see land again until we round Cape Horn in several weeks. I say this only because the charger for the ipad has broken, thus leaving us without books and can only turn around in circles with our own thoughts. It might make for an interesting social experiment… Put two people in a box for months on end and slowy remove outside stimulus and see what happens! I have clearly missed my calling as a social scientist/ evil genius !”

Skippers quotes:
Jose Munoz (CHI), Neutrogena: “We are always doing our own race but obviously we look at what is happening with those around us, in front and behind, what the conditions are and we are always looking four or five days ahead to avoid lighter winds or too much wind.

Are you well-rested?
“Yes, yes, we have taken the advantage of some better good conditions to rest when it was not so strong, with smaller sails, then we have taken the chance to lie down and rest a bit and share the work to get some rest than before we have to put up bigger sails or go faster.”

The current situation?
“We need to go as fast as possible and try to get down as much as we can to the South. The conditions have been quite variable, the wind has been going up and down so we hope that, according to the forecast, in the next few days it's going to be a bit more stable at least in direction and we will try to take advantage of that the best we can.”

If you could change a couple of small things on the boat, which would they be?
“Nothing much, we feel quite good about the boat, in all conditions it is quite good. Maybe I could get myself a better bed (laughs) but for the rest I would say that it is quite good.”

Do you feel pressure as you approach Cape Horn?
“No, not at all. It is true that that is home and all that but first we have to make the boat go well day by day, minute by minute. When we are there we'll see how it is, but no pressure. We are just looking forward to making a good race and finishing in the best possible way.”

What is it like sailing with Guillermo?
“Very good, very good. I am learning quite a lot, with a great sailor likehim. He's got a lot of knowledge to show and share.”