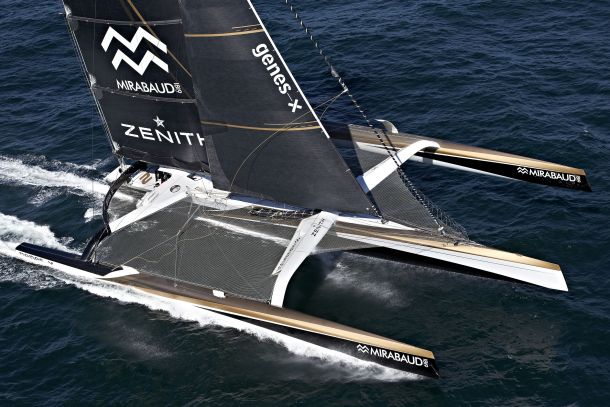 Spindrift racing’s sailors and hundreds of others will return to competition from April 2nd to 6th for the famous Spi Ouest-France, which is held every year over the Easter weekend at La Trinité-sur-Mer. Behind the scenes, the black and gold team members are busily preparing for this event and many more. The team have an action-packed schedule in 2015, with monohull races on the Diam 24, D35 and GC32 circuits and a Jules Verne Trophy record attempt next winter, for which the giant Spindrift 2 is currently being prepared. In anticipation of this most extreme of all around-the-world record attempts, the team has already achieved some incredible feats, such as building a new 42 m mast.

First success of the season
Work on the mould for the new mast began at CDK Technologies in Port-la-Forêt in June 2014. Delivery is scheduled for May, almost a year after the work – done entirely by hand – began. The planning and pre-engineering studies began even earlier, at the end of 2013, when the trimaran was first acquired by the team.

”The composite work on the carbon tube is almost complete. A few days ago we weighed it for the first time and the news is excellent, because it is the same as the theoretical weight, so we already have one win in the bag,” explained a satisfied Antoine Carraz, Spindrift racing’s shore team manager and design team chief.  Antoine, alongside Yannis Troalen and Edouard Touchard and in collaboration with the design office Gsea Design have worked very hard to design a spar that is unlike any other in the world.

A methodical approach
When the team decided to take on this crewed around-the-world record aboard the current record holder*, it focused its optimisation efforts on weight reduction. Nothing improves speed more than reducing the weight of an airborne part like the mast.

“The decision seems to have paid off, as the new mast will be 25%, or half a tonne, lighter than the original,” explained Antoine. “As soon as we began sailing the boat in 2013, we fitted the mast with sensors so we could monitor exactly what loads were being placed on the rigging and therefore determine the possible weight reductions. It means we designed the mast based on hard facts, rather than on theoretical assumptions. We then worked very hard on the geometry, optimising the aerodynamics and the structure, so the construction was complex, but the CDK teams were meticulously precise, enabling us to get where we are today.”

Several weeks’ more work at the boatyard
Between now and May, the reinforcements, sail anchor points, shrouds, deck equipment and fairings need to be fitted, and the mast needs painting. While this lengthy work is taking place, new sails are being built at North Sails, as are the cables and dozens of thread ends that will hold everything together. The team is also working hard to improve the aerodynamics of the deck in general, including the canopy, the cockpit and the nets. The boat will therefore gradually start to look different over the next few months, as she prepares to  race against the clock in the huge oceanic deserts of the Southern Ocean.