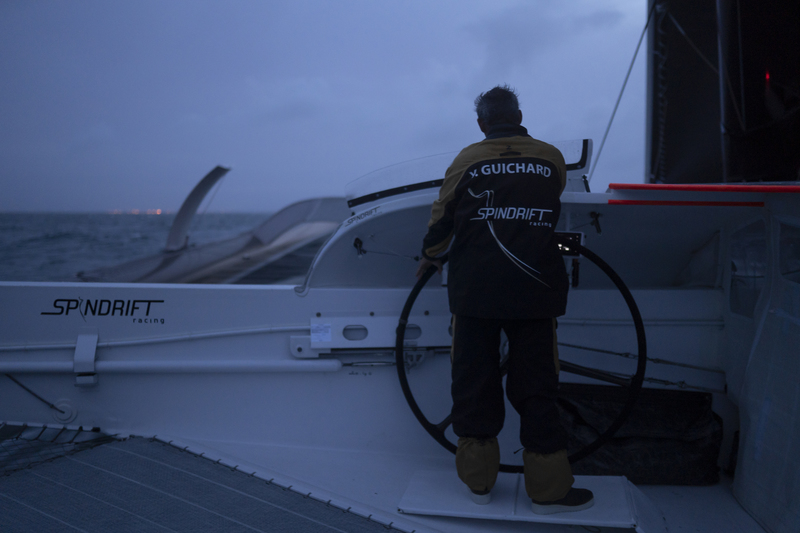 At 20h UTC, Yann Guichard, Spindrift 2’s skipper, made the decision to turn around and end the current Jules Verne Trophy record attempt.

A difficult decision following a sudden loss of control, which required the intervention of two sailors at the wheel to recover the situation. This malfunction has damaged the steering system which makes the boat unsafe to be sailed in heavy weather conditions.

All the crew members are safe and sound. Nevertheless, the multihull’s condition does not allow it to continue its world record attempt. The trimaran is currently returning to la Trinité-sur-Mer in Brittany, France.

“We seem to have had rudder issues for a year now.  We broke one in the Indian Ocean last February and, as a result,  decided to build two new ones. We had delivery of them in late September, and have carried out several sea trials with them. We thought we had sorted the issue when we left La Trinité-sur-Mer on Tuesday, however these rudders are like a 'sword of Damocles’. The favourable weather conditions around the start at Ushant, gave us the opportunity to check their reliability one last time, before heading into the Southern Ocean,” reported Yann Guichard on the phone from Spindrift 2 this afternoon.

“We tried a number of  times to solve the problem, but it keeps reappearing at high speeds and we can not control Spindrift 2, even with two crew on the helm. It is not prudent to continue like this, because there is a risk of total loss of the trimaran at high speed, which in turn is a not only a risk to the crew but the steering system could become severely compromised. Though we have managed to regain control of the boat now, we cannot race around the world with this technical problem… “

The reality is that if Spindrift 2 cannot sail with confidence above 35 knots of speed, there is little chance of improving on the existing reference time for the Jules Verne Trophy, which stands at 40d 23h 30 '30’. Spindrift 2 had already hooked into the Portuguese trade winds and was in manageable seas with about 25 knots of wind further underlining that, even in benign the conditions, the situation would not improve, however much the crew intervened.

“We are now heading back towards La Trinité-sur-Mer in a moderate easterly wind, but will go through a ridge of depression tonight.  We will wait for the winds to abate before entering the channel and we should be back on the pontoon on Friday evening. Given the problems we have to solve, at the moment, I do not think it is realistic to leave this year for an attempt on the Jules Verne Trophy. This is a massive disappointment for the whole team because we had found a good weather window to leave,” concluded the skipper of Spindrift 2.