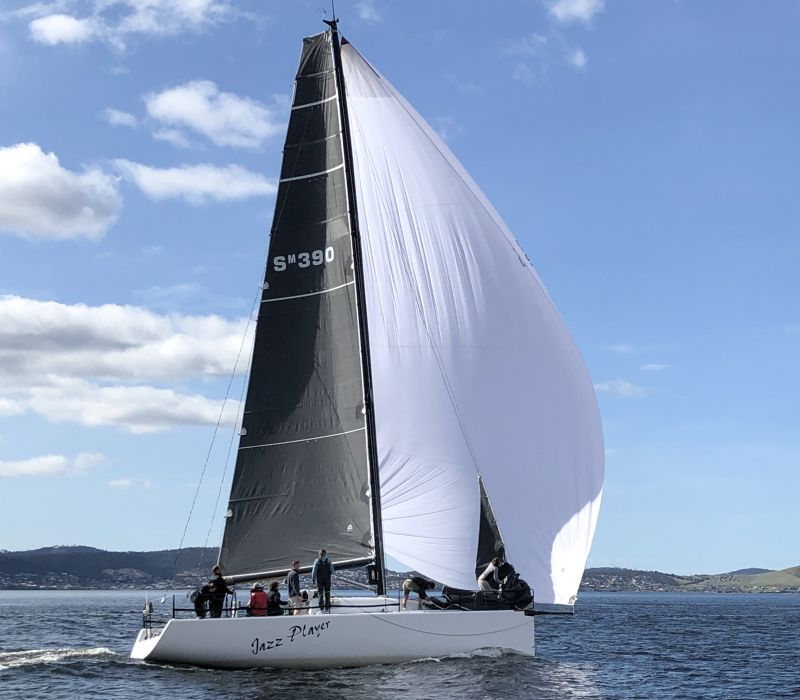 On a magnificent Father’s Day spring morning the Combined Clubs Winter Series wound up with a spectacle of sail on the River Derwent.

A fleet of 45 yachts started in a light northerly that built as the morning wore on, reaching a mid-race peak gust of 22 knots. With a westerly flick every now and again, navigators and skippers were kept on their toes as there were large gains and losses to be had.

Asymmetrical Division 1 boats Oskana, Crusader and Jazz Player revelled in the flat-water conditions laying down some spanking spinnaker runs. The Dog House and Temptation, also carrying large asymmetrical spinnakers were almost as fast, setting up an exciting finish in Division 2.

Division 3 and 4 saw more traditional boats filling the podium with Trouble, Footloose and the SB20 Mind Games bringing it home in Div 3 and Serenity, Another Toy and Innovator in Div 4.

At the completion of the 5-race series Jazz Player (John Dryden) was successful in Division 1 from Drew Latham’s Whistler and Michael Pritchard’s Oskana.

Overall winner in Division 2 was Zephyr (Ian Johnston) taking the series by one point from Ambrose Coad’s The Dog House with Steve Harrison’s Temptation in third.

Young Lion (Steve Chau) showed that consistency is the key in winning Division 3 without taking a race win but always being there or thereabouts. Dave Willans’ Trouble finished two points behind in second place overall with Just Jones (Dave Wyatt) rounding out the podium.

Division 4 proved to be the battle of the J24s with Michael Kennedy’s Another Toy pipping Matt Westland’s Zest after Zest kicked off the series with a win and a second in the first two races. Graham Hall’s reliable half-tonner Serenity finished in third overall.

The organising clubs would like to thank the competitors for showing such staunch support in difficult times and the ever-present volunteer race management teams that make it all possible.