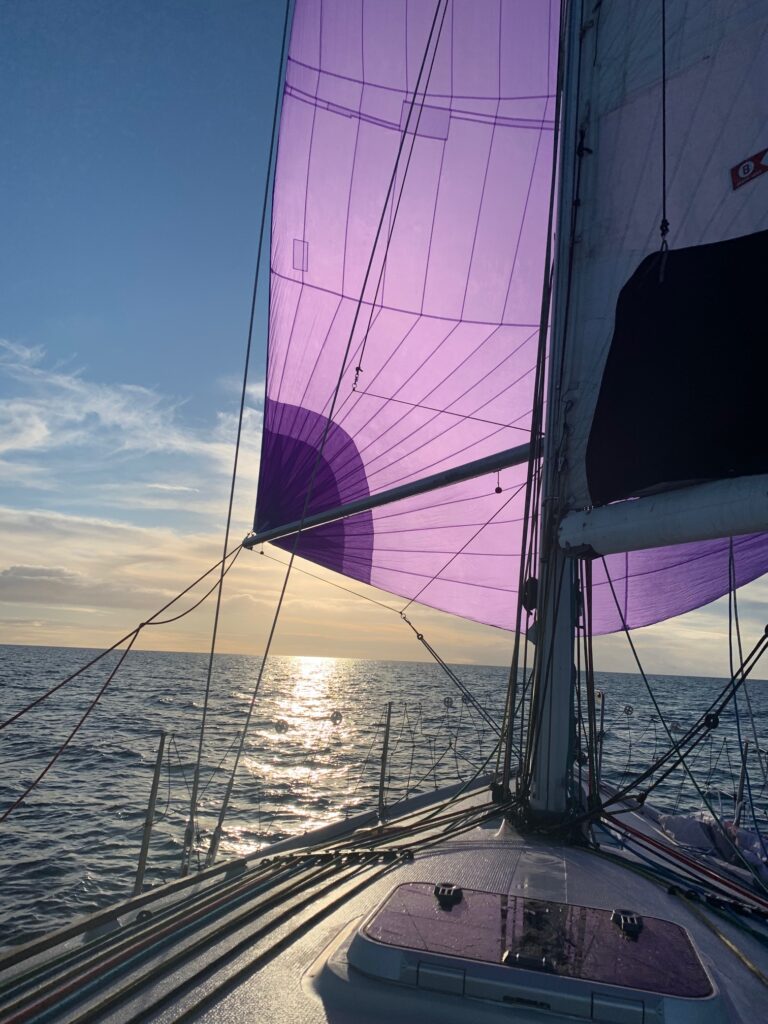 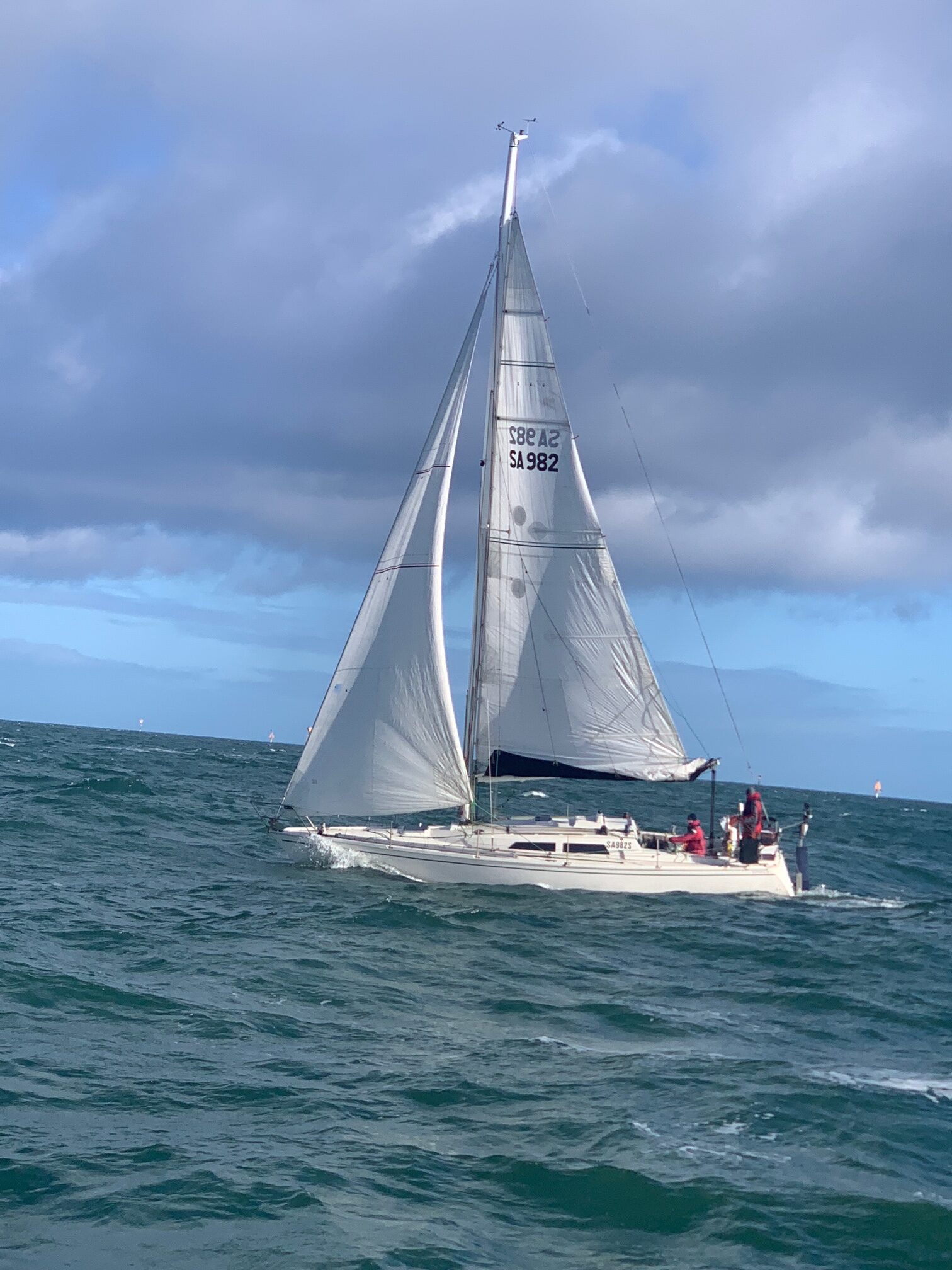 On the sail from South Australia to Sydney on board the Northshore 38 Inukshuk, Rob Large (60) and Chris Riggs (63) calculated that they have a century of sailing experience between them.

That should come in handy for the sailors, who represent the Royal South Australian Yacht Squadron, in the inaugural Two-Handed Division of the Rolex Sydney Hobart Yacht Race.

Inukshuk is one of 17 yachts competing in the two-handed division in the 93-strong fleet set to sail out of Sydney Harbour on Boxing Day.

While Large spoke to me during the delivery of the yacht to Sydney, 40 nautical miles from the heads, Riggs took over sailing duties.

“I know that when the going gets tough [in the race], it’s cold and windy and waves are breaking over the boat, I’ll sleep very well when Chris is at the helm. When things turn nice, I’ll come up and take over,” Large joked.

Jokes aside, despite having only sailed with each other since last year, the pair are looking forward to taking on this new challenge.

“We are like-minded in so many ways. We just get on well together,” Large said.

This is a good thing, as  they will spend up to four days together for the 628 nautical mile trip. With no other crew members as back up, they only have themselves to rely on.

“When one person is resting, you’re by yourself. You’ve got to be comfortable with that,” Large said. And more than anything, you’ve got to have the attitude that everything is your problem. So, you’ve got to manage that in a way, still keeping your spirits and your humour up so it doesn’t drive the spirit of the whole event down so you’re still having fun.”

Fatigue will be one of the main challenges for the two-handed sailors. If fatigue sets in, it can be detrimental to the quality of sailing and their safety.

“When you’re down and you’re resting, the person who is on duty must be able to manage all the systems without endangering themselves or the boat, which means not leaving the cockpit while the other person is below deck.

“And in bad weather or particularly at night, we stay clipped on. It doesn’t take much imagination to see if you fall off the boat, it could be hours before your partner finds out you’re gone.”

Large and Riggs are well versed on the importance of safety after years of offshore experience. Large has competed in three Sydney Hobarts, as well as countless deliveries. Just a few years ago, he sailed two-handed to New Zealand and back on a catamaran. And Riggs has a handful of Melbourne to Hobarts under his belt.

They will sail on Large’s 1998 Northshore 38 Inukshuk. Large got the idea for the boat name from his home country, Canada. Inukshuk are stones erected by Inuits and are a “friendly sign of welcome and companionship and navigation”.

Large has worked on Inukshuk almost every day for the last two years to ensure it’s ready for the race. The duo were entered in the Two-Handed Division for last year’s event, cancelled because of COVID-19. But Large believes that was a blessing in disguise, giving him more time to make the boat more two-handed friendly.

For example, the majority of ropes can now be controlled from the cockpit. They have also put a lot of thought into the redundancy of the steering system, and what can be done if something fails. They have installed a wind-driven steering system to act as the emergency back-up if their auto pilot fails or if they lose their regular rudder.

As for the weather conditions?

“That depends on how you look at it – a beam reach 10 to 20 knots, to be able to sit back and have a rum in the afternoon would be the ideal way to finish the Hobart,” Large said. “[Australian sailing legend] Sir James Hardy said, ‘Gentleman do not sail to windward.’ While neither one of us qualifies as gentlemen, [to sail] the entire 600 miles and not sail to windward at all – wouldn’t that be glorious?”

At the moment, it is looking like they won’t be sailing like gentlemen, at least for the start of the race, with a southerly forecast. But Large isn’t too bothered by that, he’s just happy to be part of this incredible experience.

“When you’ve done a Sydney Hobart, one of the amazing things about it is it doesn’t matter how you do, just finishing is a truly inspiring experience. It’s just wonderful crossing the line.

“And for us, our expectations – I don’t know. We’re a couple of 60-year-old guys going out to give it a punt just for the fun of it, and we’ll push hard and we’ll do as well as we can. But in the end, it’s a nice event to do.”