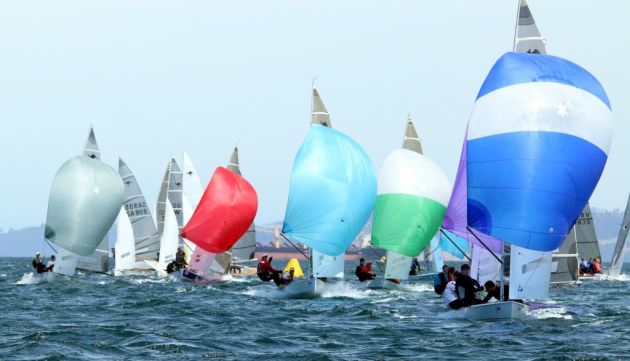 Sharpies enjoying a spinnaker run before a seabreeze on the Derwent. Photo Angus Calvert.

After 35 years of sailing a Sharpie, including contesting 27 Australian championships, South Australian sailor Sam McCloud has finally won his first Nationals in the iconic class – at the age of 63.

McCloud is unbeatable going into yesterday’s seventh and final race of the 73rd Sharpie Nationals, hosted by Sandy Bay Sailing Club on Hobart’s River Derwent, after winning race six yesterday at the helm of Warpig.

“A great day on the water…a great regatta run by Sandy Bay Sailing Club,” McCloud said as he and his crew celebrated after the win and, clearly, an overall championship victory.

It was a perfect day for the veteran and his crew of Mark Beaumont (an expat Tasmanian) and Sam Flint, a sparkling afternoon on the Derwent as the south-easterly built to a steady 13 knots and some waves

These were just the conditions that Warpig and his nearest rivals, Nude (Ryan Kelly, SA) and Bullit (Ashleigh Gabrielson, WA) needed on the high speed spinnaker reaches to overtake early leader in race six, Tasmanian junior Ollie Burnell in Bonfires.

The teenager led the fleet on the first leg but was overtaken by the powerful interstate crews, finishing eighth overall.

Warpig went on to win the race and establish a net total 10 points from a six race scorecard of (11)-2-2-2-3-1, with Nude second and Bullit third. Nude has a net 23 points; Bullit is on 24 going into yesterday’s final race.

Of the Tasmanians, former Australian champion Drew Latham in One Hump or Two is fifth overall, Gun Smoke (Maddy Salter) is ninth overall and Bonfires (Ollie Burnell) is 12th in standings.

She is the leading female and junior helmsperson in the in the 35 boat fleet of mainly adult male sailors.