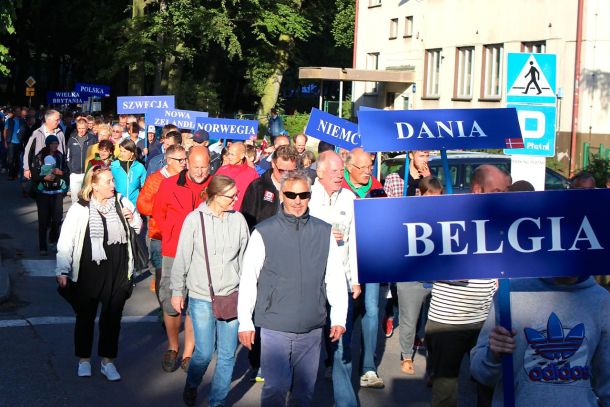 The 2015 OK Dinghy World Championship was opened Sunday evening in the picturesque town of Puck in north-eastern Poland. It is 22 years since the class last held its world championship in Puck, and when more than 100 sailors from all over the world gather in one place you know something special is about to go down.

On Sunday evening, the sailors paraded in teams, and carried national placards, from the harbour to the town square in a beautiful opening ceremony. They were welcomed by the many townspeople who had gathered there, as well as the town's Mayor. Each nation was welcomed in their home language by a local schoolchild who were also the flag bearers for the ceremony. The procession then weaved back to the habour to enjoy a reception in the event tent. And the perfection was rounded off by the serene evening sunshine, following a day of rain and strong winds – it was a welcome sight for everyone.

In fact, so far it has been a mixed bag of weather since the sailors started to arrive last week. The two days of pre-regatta concluded on Sunday afternoon in a stiff and gusty offshore breeze. Registration and measurement, conclude Monday morning before the practice race on Monday afternoon. It is fair to say that the sailors are itching to start racing, though many have been enjoying the Polish hospitality to the full.

The pre-entry list numbered around 110 sailors from nine nations, and so far just over 80 have completed entry requirements. It is a special group of sailors with current champions mixed with former champions, class legends and newcomers who have only recently discovered the joy of OK Dinghy sailing.

Following a period of growth in the class, the world championship is wide open with a lot of quality sailors here to stake their claim on the title. Historically it has always been one of the hardest non-Olympic class world titles to win, and this year will be no exception. At least 10 sailors have shown form over the last nine months good enough to take the title. There are five former world champions and three former European champions. But the winner may not come from one of that select group.

Charlie Cumbley (GBR) is a multiple UK champion across a number of classes but tried an OK for the first time last year and was soon hooked. He quickly got a boat and won the Spring Cup in Medemblik and then Kiel Week this year at the first attempt and is looking forward to his first OK Dinghy Worlds. He comes as part of a strong British team that also includes 2004 world champion, and current UK champion, Jim Hunt.

Denmark is fielding a very strong team as usual. Current European champion Jørgen Svendsen (DEN) has won races before at the world championship and is regularly in the top 10, but has yet to get close to the top. Former European champion, Bo Petersen (DEN) has been one of the main contenders all year, with top finishes at Medemblik and Kiel while also winning the Nordic championship. Jørgen Lindhardtsen (DEN), even at 70 is still a force to be reckoned with. Other top Danes include René Johansson (DEN) and Stefan Myralf (DEN), who are both capable of top 10 finishes.

Unusually there is a small number from down under. Australia have sent team of six including world ranked No. 4 Mark Jackson (AUS), while the Kiwi team unusually only consists of the current World no 1. Greg Wilcox (NZL).

As hosts, Poland is fielding its strongest team for many years. While regulars, Tomasz Gaj (POL) Pawel Pawlaczyk (POL) and Antoni Pawlowski (POL) are competing, the event has also attracted one of Poland's top Finn sailors, Milosz Wojewski (POL).

Ten race are scheduled from Tuesday 28 until Saturday 1 August. One thing for sure is at the end of the week there will be a new world champion as current holder Matt Stechmann (NZL) is not competing. Racing begins on Tuesday and the forecast for the week ahead looks to be quite breezy. It is heading to be a special championship.