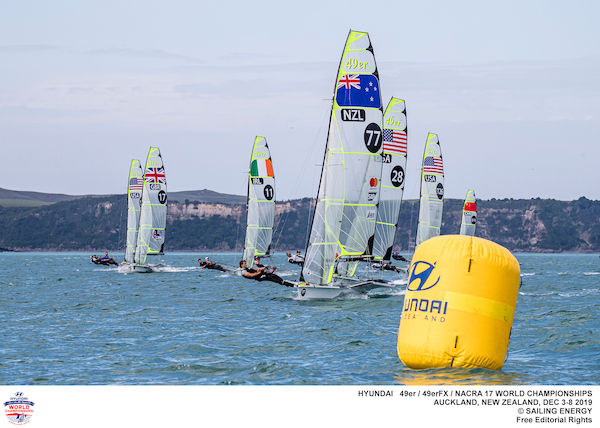 Erik Heil and Thomas Ploessel opened day one of the World Championships with a stunningly consistent performance while some of the other big guns failed to fire.

Two 49er races were completed after wild weather lashed the race areas off Auckland, New Zealand. With wind speeds up to 37 knots recorded on the race course earlier in the day, the sensible decision was made to keep all sailors ashore until sailable conditions arrived. After a delay long enough to cause even the most seasoned veterans to assume they were having a day off, the 49er fleet were sent out for two rounds of qualifying races.

With over 400 athletes competing from 40 nations and with the broadest ever suite of live coverage in Olympic sailing history capturing every race, the 2019 Hyundai World Championships will be the most important event on the sailors calendars prior to Tokyo 2020.

International fans can view the racing live at 49er.org/live or on Sky Sport 9 for those in New Zealand.

In the Red Fleet, reigning Olympic Champions Peter Burling and Blair Tuke showed total confidence to kick off the regatta in the best possible way in front of their home fans. They won the battle to ‘win the pin’, the favoured left-hand end of the start line. This gave them the opportunity to put the bow down, accelerate their 49er up to full upwind pace, earning the Kiwis the opportunity to tack and cross the fleet, extending from there. They took a three-boat-length lead into the windward mark. It was all the more impressive given they then gybe-set – implying the far side actually had the better breeze.

The dynamic duo never looked back, pulling out a massive lead and a race win on the scoreboard.

In the second race it was Dominik Buksak and Szymon Wierzbicki (POL) who came off the left side of the course to pull away to a large lead by the first mark, again with most of the fleet heading right to the far side. The Poles extended to a sizeable lead but then almost capsized while negotiating the leeward gate, only just rescuing themselves from a watery error.

The chasing pack also suffered their spills, with second place Jonas Warrer and Jakob Precht Jensen (DEN) capsizing near the bottom marks. Burling and Tuke made a few passes to shift into second place, and then on the last downwind overtook the Polish for the lead. While the Poles overstood the layline and were struggling to keep their kite full, it was Burling and Tuke who made a rare error to capsize on their final gybe into the finish, dropping back to 11th across the line. What was so nearly a perfect start to the regatta for the home favourites – ruined at the final hurdle of day one.

In yellow fleet, the fleet was obviously eager after the long delay caused by the weather. Both the general recall first start and the all-clear second start featured boats tacking to port tack almost immediately after the gun as the post-frontal breeze tried to settle.

Louis Chambert and Hugo Fedrigucci (FRA 180) pulled out a huge lead at the top mark with a delta of 30 seconds, although a gybe-set proved to be the wrong move as the French sailed into a wind hole at the bottom of the first lap.

On the second upwind in a French battle for supremacy, Kevin Fischer/ Yann Jauvin (FRA44) showed Erwan Fischer/ Clement Piquin (FRA655) how to sail a 49er upwind. Starting from the wrong side of a loose cover position, FRA44 accelerated out from under FRA655, around the front of their bow and tacked to cross on the starboard layline to lead into the top mark second time and never looked back.

Lucas Rual / Emile Amoros (FRA 8) performed the classed ‘dead bird’ start; starting right on the boat end of the line and tacking immediately to the right-hand side, resulting in a fair sized lead after lap one. Sailing in phase and positioning themselves perfectly between second place and the next mark, the French never looked like giving it up, although Jakob Meggendorfer and Andreas Spranger (GER 22) had closed the gap to just 8 seconds by the finish. Meanwhile, New Zealand’s Logan Dunning-Beck and Oscar Gunn came from deep in the fleet to finish third, using all their downwind speed to get back into contention. After a 21st in the first race, it was just the Kiwi team needed before heading back ashore.

After a general recall the Blue fleet was the last race to get going as they suffered from unstable winds. By the time racing did get going the wind started picking up quickly and many top teams got caught out on the wrong rig settings.

Some of the favourites in this fleet – such as Lukasz Przybytek and Pawel Kolodzinski (POL 42) – found themselves with a lot to do at the first windward mark. Portuguese sailors Jorge Lima and Jose Costa suffered rig damage and were forced to pull out of competition for the rest of the day, a disappointing start to the regatta with Costa also suffering an ankle injury.

Showing no hesitation were Rio Olympic bronze medalists Erik Heil and Thomas Ploessel (GER 4), but in tacking to the left side upwind the experienced Germans let slip the 2018 Junior World Champions from Ireland, Robert Dickson and Sean Waddilove, who overtook for the lead.

In a tight downwind battle, the young Irishmen held off the Olympic medallists to win their first ever race at a World Championship, a massive moment for any sailor.

In race two, Heil & Ploessel (GER 4) got an excellent start off the pin end of the start line, giving them the control on the left-hand side of the race track. The Germans tacked and crossed the bulk of the fleet before putting in another hitch all the way to the left-hand layline. Heil & Ploessel rounded the first mark with a 60 metre lead over the Brazilians Marco Grael & Gabriel Borges (BRA 15). Germany extended the lead for the race win, putting them in first overall of the 49er World Championships after day one, a very consistent performance by Heil & Ploessel where so many other top names faltered. Brazil held on for second across the finish line, followed by Lukasz Przybytek and Pawel Kolodzinski (POL 42).

Athletes and fans alike will have to wait an extra day for the 49erFX and Nacra 17 fleets to hit the water. With daylight disappearing, the 49erFX and Nacra 17 fleets were sent home before getting a shot at the water. Both fleets will be first on the roster for day 2, with four scheduled races in each fleet, to try and catch up on the qualifying series.